Danica Patrick’s Big Decision For 2012 Looks To Be NASCAR 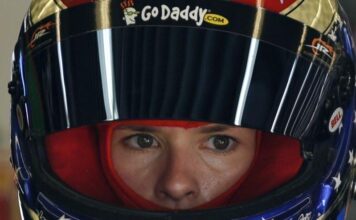 Last week, it was released that Go Daddy was sold from Bob Parsons to KKR & Co. for $2.25 billion. Off the bat, people were worried about how that would effect Danica Patrick’s future. It appeared that was unnecessary. A spokesperson for Go Daddy said that it won’t affect their relationship with her. David Yeazell | SpeedwayMedia.com“I can tell you Bob’s been very vocal about how well Danica has fit into Go Daddy’s marketing efforts,” spokesperson Elizabeth Driscoll said. “And the new investors have specifically said they don’t want to mess with Go Daddy’s secret sauce…at least two of the magic ingredients, our customer service and marketing.”

“We are very much looking forward to the future…on the Internet and on the race track.”

With Go Daddy’s support behind her 100%, it is now up to Patrick with what decision she chooses to make for herself in 2012.

Silly season always seems to bring a puzzle and right now, the puzzle has Patrick pointed towards NASCAR for 2012.

Go Daddy already announced that it wouldn’t be backing the No. 5 entry from Hendrick Motorsports next year with driver Kasey Kahne, as it had backed the entry the last couple of years with Mark Martin. This opens up the door for Go Daddy to take on a new sponsorship role within the NASCAR sector. Patrick is already their marketing tool and the person who has given them some of their best publicity. It’d make sense that they were making that announcement so they could sponsor Patrick full-time over at JR Motorsports in the Nationwide Series.

Also, if Patrick came over to NASCAR, her future in the NASCAR Sprint Cup Series looks bright down the road if she is capable of moving up. Tony Stewart already stated that he’d like to have her drive for him and as was seen last Friday night at Daytona, they work well together.

Speaking of Daytona, it showed that Patrick is a strong learner in learning aspects of stock car racing. Back in February, she was criticized for how she drafted with drivers as they stated she didn’t know the idea of dragging the brake. However, she learned that quickly on Friday night and led the field for a bit while working with Tony Stewart. She also worked well with JR Motorsports teammate Aric Almirola.

“Got disconnected about half a lap to go and dropped back to get reconnected with Aric,” she said after scoring the third top 10 of her NASCAR career Friday night. “It looked like Mike (Wallace) was struggling there. I kept the car straight and my foot in it, probably not the right thing to do in a wreck.

“I learned a lot out there. I was glad I got to push a bit as I was thinking, ‘Am I only good as a leader?’ But the guys did a good job on the Go Daddy Chevrolet.”

Her ability to be successful in NASCAR has been seen in many different forms also, as she scored her first top five earlier this year at Las Vegas Motor Speedway, finishing fourth with fuel strategy after running just inside the top 10 all day.

“I mean, we’ve been really consistent – the finishes haven’t shown it,” crew chief Tony Eury Jr. said after the fourth place finish. “It’s really easy for her to run in the top 15. If we can get everything right, we can run in the top 10 with this girl.”

Lastly, it has been displayed that she has a good teammate in Aric Almirola to lean on with his experience, as witnessed last year at Homestead-Miami when he came on her radio during the race to give her some tips about her racing line.

With all the pieces laid out, it’d look to be that her decision will be NASCAR full-time in 2012.Though whatever her decision, she’ll have her fans behind her and IZOD IndyCar Series CEO Randy Bernard says that he’s okay with whatever she does.

“I think the world of Danica,” he commented. “I think she’s going to make the right decision for her and I will wish her well whichever decision she makes. She’s done a lot for our sport and that’s what we need to remember. I think that she’ll probably go where the money is the best and I think that’s what I would do, you would do as well, and I think it’s more important right now I focus my attention to Go Daddy and make sure that I can keep Go Daddy apart of our series. I think without Go Daddy, Danica Patrick wouldn’t have the fame that she has and I’m looking out for the long term of our sport.”

SM Staff
Previous articleNotes From The NASCAR Nation: Lending Junior A Helping Hand
Next articleHot 20 over the past 10 – No mysteries as to why Harvick is happy heading to Kentucky