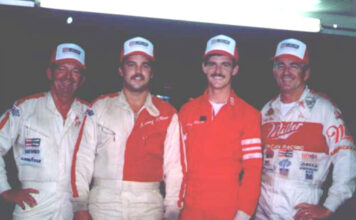 “The world weighs on my shoulders, but what am I to do? You sometimes drive me crazy, but I worry about you.” These few lyrics from Rush, one of rock’s more infamous bands tells a small story about the life of the Allison family, and “The grace under pressure” they endured while racing in the NASCAR series. [/media-credit]Many times I have sat back thinking how much worrying did Bobby Allison go through watching his sons Davey and Clifford take up the same sport that he so much excelled at, without ever knowing one day this same sport would take his other love—that being not one, but both of his son’s.

Looking back, where would the hands of time actually stop to reflect on the remarkable Allison legacy? Would it be the 1988 Daytona 500, when Davey chased his dad around the track and fell short of what would be his first 500 victory? Instead of the victory, he got to see up close his dad win his third 500, and the younger Allison finished second.

Or would it be 1992, when Davey would win his one only 500, four years after his father won his third? Never in the history of NASCAR racing, has one state been so close to a racing family, as Alabama was to the Allison’s. Along with fellow drivers Neil Bonnett and Red Farmer, Bobby and Donnie Allison started the famous Alabama gang, which also included Bobby’s sons Davey and Clifford once they became regulars on the NASCAR circuit.

As Bobby and Donnie continued to make NASCAR a way of life and keep the family name in the forefront, Davey and Clifford continued to follow in their father’s footsteps while trying to make names for themselves. After a near-fatal accident at Pocono, 27 years and 84 race wins into his racing career, Bobby’s career was over and he retired. Meanwhile, Davey was out making history of his own trying so hard to follow in his dad’s footsteps, in order to keep the Allison legacy alive.

Sponsorship during Davey’s era didn’t come easy, and just because you had a famous last name it didn’t mean that they were lining up at your door to sign you. A driver not only had to prove himself, but he also had to show them he really wanted it. Davey had a special racing talent, and he proved it by going to victory lane twice in his rookie season. During his nine years racing in the Winston Cup Series, Davey visited victory lane an astounding 19 times—including five victories in 1991.

1992 would turn out to be Davey’s best season with five trips to victory lane, along with being his worse with some pretty violent wrecks. This same year in August, the Allison’s suffered the worst loss of all when Clifford, died in a crash during practice at Michigan International Speedway for a Busch series race.

It was a beautiful July day in 1993, the sun shining brightly on Davey’s career with Bobby, Robert Yates and Larry McReynolds all getting together to plan out Davey’s rise to stardom in hopes of continuing the Allison legacy. The very next day, 11 months after the death of Clifford, the racing god’s would once again come knocking at the door of the Allison’s. Tragedy would once again strike them, as Davey would die in a helicopter crash, and the Allison legacy would end on a tragic note.

The state of Alabama would go into mourning in honor of their fallen hero. Headlights burned throughout the day on the highways and byways of Alabama. Tragically, only a year later, the Alabama gang would become a memory with the death of Neil Bonnett. Davey was well on his way to beating the odds of following in his dad’s footsteps where many have tried, and yet many had failed. This is the 18 year anniversary of the day that shook the racing world, but the memory of the Allison legacy and the Alabama gang lives on.