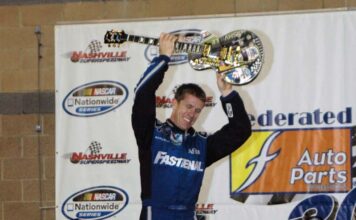 Brad Keselowski started on the pole for the Federated Auto Parts 300 NASCAR Nationwide Series race at the Nashville Superspeedway, with Steven Wallace alongside him. As they completed the first lap, Keselowski blasted away to a big lead over second place Carl Edwards. Keselowski would hold that lead for the first 58 laps until Edwards squeezed by. [/media-credit]Edwards would hold onto a strong lead through lap 82 as a caution flag flew for debris in turn 3. As the leaders headed down pit road Elliott Sadler and Austin Dillon would both opt for two tires as opposed to the leaders taking on four. Sadler would take the lead off pit road, just ahead of Edwards, but a speeding penalty entering pit road would send Edwards to the rear of the field. Sadler’s lead would be short lives as Keselowski took it back 2 laps later.

As the laps wound down Keselowski radioed to his crew that there was a problem with the car. By lap 117 Dillon would overtake Keselowski for the lead, but Edwards had been charging forward fast and four laps later, the #60 Ford of Edwards would retake the lead. The second caution of the night would fly on lap 129 as Mikey Kyle (30) and Brian Scott (11) made contact on the backstretch, sending Kyle spinning through the infield. The race would go green again on lap 134 with Edwards holding onto the lead. That was until the third caution period of the night which came on lap 178 for debris on the backstretch.

Coming off the third caution, Austin Dillon would take the lead away from Edwards. But Dillon’s reign would be short lived as just 5 laps later Edwards would slip by, retaking the lead for the final time. The win was Carl’s 34th in the NASCAR Nationwide Series and his fifth win at Nashville Superspeedway. The win is also Edwards his fifth of the 2011 season.

Edwards led the most laps (124) followed by Keselowski (89) Dillon (9) and Elliott Sadler (3). Sadler fell out of the points lead after a reported broken axle sent the #2 Chevrolet to the garage for 15 laps, finishing 30th. Sorenson’s 8th place finish vaulted him to the points lead with Stenhouse second and Sadler falling back to third.