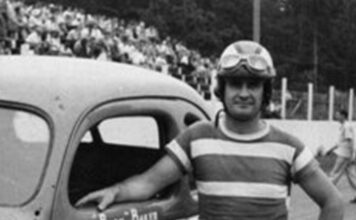 Elzie Wylie “Buck” Baker was one of the most dominant drivers in NASCAR during the 1950s. His never give up attitude was the fuel for the fire that pushed him to be the best. Baker became the first driver to win consecutive Sprint Cup Championships in 1956 and 1957.

His strategy was a mixture of determination and the belief that he was capable of winning any race.

“You can’t let anyone think you’re not going to win a race,” he once said during an interview. “If you talk yourself out of believing you are a

winnner, then you might as well stay in the pits and let someone else do the driving.”

“There were times we left home without money to buy new tires. We didn’t know where the money was coming from. Heck, there’s times we didn’t have money to put gas in the truck to get to the track.”

“But someone always came through for what we needed. We always could have used more and better equipment, but I’m talking about don’t let yourself believe you can’t be a winner.”

Baker was born on a farm near Chester, SC on March 4, 1919. He didn’t grow up with dreams of racing but he always had a wild streak.

It was a bull calf named Buck that inspired Baker’s nickname because he shared the same uncontrolled abandon as the animal. That recklessness continued into his teenage years when he began running moonshine for his cousin.

He also supplemented his income with a variety of other jobs including working in a bakery and selling cars.

When World War II erupted, Baker did a stint in the Navy and served in Maryland. But even the regimented life of a serviceman did not change him. He still found a way to run moonshine for his pals in his spare time.

After the Navy he moved with his wife and son to Charlotte, NC. Baker found work as a bus driver for Trailways. He had a family and a regular job but Baker was never the typical family man.

One evening he was headed to Union, SC, with about 20 passengers on board. Somebody mentioned that there was a square dance in the town of Chester. They all took a vote and decided to take a detour to the dance.

“The vote to go to the dance was unanimous among the passengers, who were singing and having a good time. So I parked the bus and we all went in. Meanwhile, the dispatcher had the police out looking for the bus.”

They finally arrived in Union about three hours late.

“The passengers were half drunk, hanging out the windows and waving and carrying on. Driving into the garage to park the bus, I almost ran over the owner of the company. He fired me on the spot but rehired me the next morning before it was time to make another run.”

It was during this period of his life that Baker decided he wanted to try his hand at becoming a race car driver. He got a later start than most but competed in his first NASCAR race in 1949, at the age of 30.

Baker found some success in those early years, racing mostly as an independent owner/driver and in 1952 he captured his first win in the Grand National Series (now Sprint Cup Series) in Columbia, SC.

Baker was known as a hard charger both on and off the track. His competitors knew that too much beating and banging on the track would be dealt with in the pits after the race.

“My dad won his share of races on the track,” said Baker’s son Buddy, “but I don’t think he ever lost a battle in the pits.”

In 1955 Baker finished second in the points standings and caught the eye of mulit-car team owner, Carl Kiekhaefer.

“I saw that Buck was my top competition,” Kiekhaefer said.  “There is only one thing to do with a man like that — hire him!”

In 1956 Baker won 14 races and his first Cup championship while driving for Carl Kiekhaefer who was partnered with legendary car and engine builder, Ray Fox.

The following year, Kiekhaefer left NASCAR and Baker was on his own again. He partnered with Bud Moore as his crew chief and scored ten victories in 1957. Baker won his second Cup championship becoming the first driver to win consecutive championships.

The following season Baker once again finished second in the points standings.

One of Baker’s most controversial races was on December 1, 1963 at Speedway Park in Jacksonville, FL. Although NASCAR awarded the winning trophy to Baker, the race was actually won by Wendell Scott.

Hours after the event, NASCAR officials admitted that Scott had won the race. Wendell Scott went in the record books as the first and only African-American to win a NASCAR race in the premier Cup series. They gave him a trophy about a month later in Savannah, but it wasn’t the real thing. Baker got the real trophy.

Years later, Baker would say, “Many racers gave him a hard time, including some of my friends, but I got along fine with him and tried to help him. He did as well as anybody with the equipment he had.”

“By the time he was declared the winner, all the fans had left the track. I’ll always believe that I won the race, but I don’t want to take anything from Scott by saying that. It was OK with me, and I was happy for him.”

In addition to his two championships, Baker won the Southern 500 at Darlington Raceway three times. His last victory there came in 1964, at the age of 45. It would also be the final win of his career.

Baker considered it his biggest accomplishment.

“In 1964, I drove Ray Fox’s Dodge in the Southern 500. I was 45 years old at the time. Fox was concerned that I was too old to run 500 miles. Others had written me off as too old. I told Fox not to worry about the horse, just load the wagon. Buddy (Buck’s son) was there, and toward the end of the race, Fox was seriously thinking that I might need relief. Buddy told him there was absolutely no need to say anything to me, because I wouldn’t get out of the car. And he’s never been more right.”

“It was the biggest thrill I had in racing. There was nothing left for me to prove to those who had said I was finished.”

Baker was known as one of the most versatile racers of his time. He won races in NASCAR’s Modified, Speedway and Grand American series, raced in multiple makes of cars and won for eight different team owners.

His son, Buddy once said, “There was a time in the modified division that nobody could beat him.”

After retiring from NASCAR, Baker opened the Buck Baker Driving School in 1980. Many of today’s top drivers have attended his school including Jeff Gordon, Tony Stewart, Ryan Newman, Jeff Burton and Ward Burton.

Baker claimed that Jeff Gordon made the decision to race stock cars at his school.

“He turned North Carolina Speedway about three seconds faster than the school car he was driving had ever gone. He drove to the motel and told his mother that stock car racing was what he was going to do for the rest of his life. I knew then that he was going to be a hell of a driver. I guess the rest, shall we say, is history in the making.”

In 1998 Buck Baker was named as one of NASCAR’s 50 Greatest Drivers and in 2010 was honored as a nominee in the inaugural class of the NASCAR Hall of Fame.

He summed up his father’s life saying, “Throughout the entire racing world, I don’t know of anybody who would have said he didn’t give 110 percent from the time they dropped the green flag until the time the race was over.”

Thanks to circletrack.com for Buck Baker quotes

Angela Campbell
A native of Charlotte, NC, Angela (Angie) was first introduced to racing by her father. An avid fan of NASCAR, she found a way to combine her love of racing with her passion for writing. Angie is also an award-winning member of the National Motorsports Press Association. Follow her on Twitter @angiecampbell_ for the latest NASCAR news and feature stories.
Previous article
HOORAHS AND WAZZUPS: MICHIGAN AND MONTREAL MOMENTS
Next article
AdvoCare to Sponsor Leavine Family Racing’s No.95 Ford