Win no. 49 for Hornaday Jr. at Atlanta 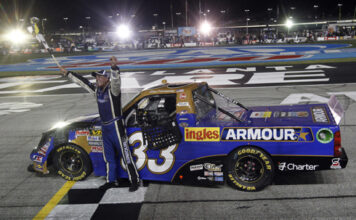 [/media-credit]Clint Bowyer was catching Hornaday quickly in the closing laps, but Hornaday was able to lead the final 17 laps and win his record 49th NASCAR Truck Series by 1.596 seconds over Bowyer.

“See that trophy? We stole it tonight, but I’ll take it any way we can get it. Jeff and all the guys worked hard. We got back up to sixth place after that pit stop, they did an awesome job in the pits.” Hornaday said.

Bowyer led 97 of the 130 laps ran and was looking like his would win his second Truck Series race of the season, but he had to pit for tires and fuel.

“Got beat by a guy that snookered me, played a better poker game than we did and we got beat. But you gotta hand it to those guys, man we had a great truck. Kevin’s always put me in a great truck. Love this Truck Series, it’s a lot of fun being able to race Kyle for the wins and give him a run for his money.” Bowyer said.

“We had the second-best truck. For a few moments, we could get in front of Clint. But we didn’t have it on the long runs. We’d always get loose. We could never get it the way we needed it.” Busch said. “The 2 truck was definitely the best truck of the night. It’s fortunate for us he didn’t win given that we’re fighting for the owner’s championship.”

Newman was racing in honor of his good friend Beau Slocumb, who succumbed to cancer in April. He was driving the No. 08 tribute paint scheme. Slocumb’s friends and family were also present.

“We didn’t get the victory that we wanted, but a top-five, that’s all we had tonight.” Newman said. “(Tonight) my mind wandered a couple times. (Beau) would have had fun, been smiling, just like me. Probably thinking about where he could put up a tree stand tomorrow.”

James Buescher finished 10th and took over the series lead by 12 points over Johnny Sauter. Sauter cut down two tires after a fender rub and finished 29th.