NASCAR in Perspective Thanks to Hurricane Irene 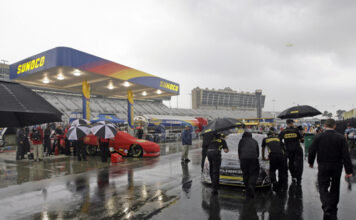 This past weekend, while the stars of NASCAR battled in the Coliseum at Bristol, many on the east coast battled the effects of Hurricane Irene.  And for many NASCAR fans, from the Jersey Shore to New England, this weekend’s race was the first one missed in many years because of being in the eye of the storm. [/media-credit]While NASCAR traditionally is the focal point of every weekend for hardcore fans, this past weekend for many was consumed instead by long lines at the gas station, even longer lines at the grocery store, and securing as much as possible so that it would not become a flying weapon in the howling wind.

When the storm began in earnest, roaring up the east coast, the race coverage was overpowered instead by hurricane coverage, taking shelter, and hunkering down for safety. The power of Hurricane Irene pre-empted all, putting the real meaning of racing in its proper perspective.

For so many, the driver introduction song of Cup driver Scott Speed, ‘Power’ by Kayne West, took on a whole new meaning thanks to Hurricane Irene. For those in the storm, the loss of power consumed many, not only during the height of the storm but also in its wake.

While Second Lieutenant Trint R. Callison from the Tennessee Army National Guard led the Bristol race crowd in the Pledge of Allegiance, the National Guard and other law enforcement personnel all along the path of the hurricane gave the command instead to evacuate and seek safety in local shelters.

The beating and banging that traditionally happens at Bristol was replaced by the beating down of the rain and the banging of the tree limbs and trees themselves as they fell as a result of the hurricane strength wind.

While the Irwin Tools Night Race at the ‘World’s Fastest Half Mile’ had relatively few cautions, the yellow flag was out all over the east coast for roadways that had eroded, dams that did not hold, and bridges that literally washed away from the force of the storm.

NASCAR four-time champion Jeff Gordon may have thought he had challenges on pit road during his run at Bristol, but he faced nothing like the challenges that folks who had to ride buses on the congested roads leading out of Atlantic City to seek shelter in schools and arenas further inland in New Jersey.

And in spite of the many decisions that every crew chief made atop their respective pit boxes, those paled in comparison to the life and death decisions that were made every second on the fly during the storm by the staff of the Office of Emergency Management as they coordinated the critical response to the constantly changing weather conditions.

At the end of the Bristol race, Brad Keselowski was not the only one turning in another ‘Iron Man’ performance yet again. There were countless men and women throughout the hurricane affected area who turned in courageous efforts, saving lives and pulling people from the rising flood waters and the raging streams and rivers.

Unlike NASCAR, which is now in the throes of setting the Chase field to run for the coveted Cup championship, the majority of those impacted by Hurricane Irene are in the throes of trying to clean up, shoveling out their basements filled with muck and mud as they try to pick up the pieces of their lives.

And while the top ten drivers from last year determine if their schedules will allow them to be honored by the President at the White House, those who lived through the storm instead await a visit from the President, in hopes of learning more about the federal assistance from FEMA and help from other entities that may be available to them.

Thankfully, no NASCAR tracks were severely impacted by Hurricane Irene. Richmond International Raceway did lose power, as well as having some trees down, with leaves and debris littering the track.

“Our operations guys were so busy, trying to get generators up and running,” Aimee Turner, RIR director of public relations, said. “We fared well compared to what the State has fared.”

Similar situations occurred at both New Hampshire Motor Speedway and the ‘Monster Mile’ at Dover, however, again the damage was minimal.

“Unfortunately, many of our fans within the New England area were hit worse and our thoughts are with them,” Kristen Costa, NHMS director of communications said.

One nearby race track took matters into its own hands, providing hope to many affected by Hurricane Irene. Pocono Raceway, in cooperation with the American Red Cross of the Poconos, raised over $8,000 through their Hurricane Irene Disaster Relief Ride.

“Hurricane Irene was the latest natural disaster to have taxed the resources of the Red Cross and Pocono Raceway was proud to help in the disaster relief effort,” Brandon Igdalsky, Pocono Raceway President and CEO, said. “Pocono Raceway would like to thank everyone who participated in the ride for their time and generosity, even though some individuals suffered property damage and were still without electricity days after the storm.”

That perhaps is the best perspective on the Bristol race weekend that was pre-empted for many by Hurricane Irene. For truly it is about NASCAR fans helping fellow fans and neighbors helping neighbors in need.

And while setting the field for the Chase may seem all-consuming and important, all should remember that helping those recover from this storm warrant their continued attention, prayer and support.