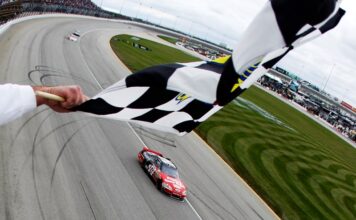 For a guy who did not think heading into the this race weekend that he had a chance at winning the championship Tony Stewart found himself leaving the Windy City only 7 points behind the new leader, Kevin Harvick. Stewart had enough gas while many of the stronger cars of the day and fellow chase participants were running out on the white flag lap.  Harvick was behind by almost a second and Dale Earnhardt Jr. followed Stewart with Carl Edwards and Brad Keselowski rounding out the top five.  Eight of the top ten finishers were chase participants with Clint Bowyer and Mark Martin finishing seventh and ninth respectively.

Defending champion Jimmie Johnson and Kenseth, both who led part of the race today ran out of fuel.

Stewart said, “It is huge; I had a migraine all day yesterday so I am kinda glad we didn’t race. Man, this Office Depot/ Mobil One Chevy was awesome! All of our partners … we have had a rough year so this is a good way to start off the Chase.”

Stewart, who was winless up to today is headed to New Hampshire where he and his teammate had their best showing of the season earlier when they finished 1-2 with Newman taking the checkered flag.  Stewart said, “The way we ran there in the spring, I am real excited about going to New Hampshire.  So I am just excited and proud of everyone on our Office Depot/Mobil 1 Chevy team and they did an awesome job all weekend and Darien and these guys made some awesome calls and great pit stops by the crew.  We just had a good day today.”

Stewart’s crew chief Darian Grubb said, “Boy does champagne feel good right now. It’s pretty sweet. It’s the way to start the Chase off, especially with the year we’ve had. We’ve had some really good cars, really fast cars and some bad luck and circumstances that kept us from winning races. To get our first win leading into the Chase feels really good.”

The new points leader and second place finisher Kevin Harvick said,”We worked real hard all weekend trying to be smart.  The car was a bit of a struggle in the middle part of the race but in that last run we were one of the best cars on the track.  My guys had great pit stops and worked really hard trying to get better so I really have to thank those guys for what they got us today and we had a good car and we were just real smart all weekend and did a good job and I am real happy with the team.”

Jeff Gordon ran out of fuel and dug himself a hole dropping from third to eleventh in points. Gordon said, “We were just off. We didn’t qualify good. That got us behind right there. It was just one of those days. You know. We had a right front tear apart. We actually got the car halfway decent there at the end. Then it came down to saving fuel and we obviously didn’t save enough fuel.”

Gordon noted that they need to have some improvements saying, “We have to qualify better; we can’t have days like we had today. That’s for sure.”

Ed Coombshttp://www.sportshooter.com/coombse
Ed began covering NASCAR for the former Gater Racing News regularly in 2000. He began working with Speedway Media in 2003 by supplying exclusive photos from the races covered. Currently he is the Editor and Assistant Publisher of Speedway Media. He also manages staff and credentialing. With the closing down of Gater News after nearly 50 years he hopes to become a more regular contributor at Speedway Media as a writer and photographer. My Twitter name is @coombsed feel free to follow me I am a member of the National Motorsports Press Association.
Previous articleDER RACING SERIES CROWNS SEASON CHAMPIONS IN THUNDER VALLEY
Next articleKansas Speedway Announces Fan Hospitality Option