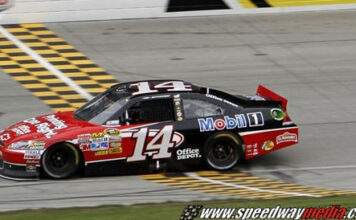 Do you know what a good crew chief is? He is the guy who tells his driver/boss that they are good to go in the fuel department, and is right. That does not necessarily mean that those who are wrong are bad, but maybe Jeff Gordon, Kyle Busch, and Matt Kenseth can enlighten us on the subject after what went down in Chicago on Monday. [/media-credit]It might have been for just the first time this season, but for Tony Stewart Monday marked his 40th career Cup victory. The win moved him to within seven points of Chicago runner-up Kevin Harvick atop the rejigged standings, standings that actually matter as we are down to the final nine races of the season. Still, it is a bit early to get overly excited just yet with eleven drivers still within 25 points of the top dog.

That guy 25 points back would be Jeff Gordon. They worked on his car, got it just right at the end, but then a funny thing happened to the engine. It started to sputter due to lack of fuel, yet he still managed to speed coming into the pits. I wish my car would run out of gas and still allow me to speed to the gas station. Gordon might have been better off just to let it die out there, as he lost a lap due to the infraction to wind up, ironically enough, 24th.

Matt Kenseth finished 8th, but while getting a push from your friends is alright most of the time when you find yourself sitting in a fancy go-cart, it can’t be done on the last lap. So, take that 8th place finish and shove it to the head of those a lap down, and you wind up in 21st. At least he sits a big point ahead of Gordon in the Chase.

That might not sound like a big deal to you, but Denny Hamlin would swap places with Kenseth in a second. Hamlin sits 16 points behind Mr. Gordon, 41 points off the pace after one event. I had heard that he went into the Chase liking his underdog role. He must love it today, as tire woes left him 31st on Monday, leaving him more like a ran over dog. Rain might have delayed the action a day in Chicago, but Hamlin had his own personal storm on Monday to put a beat down on his championship hopes.

Dale Earnhardt Jr wound up third, with Carl Edwards, Brad Keselowski, Kurt Busch, Ryan Newman, and Jimmie Johnson all with Top Tens. They sit between ten and 16 points back as they motor on to New Hampshire. Newman won there this summer to become one of four Chase drivers who have won three times at the track, with eight of those drivers having won at least once there. In fact, only Edwards, Earnhardt, Kenseth, and Keselowski have not. Now might be  a good time to change that. Enjoy the week!

Ron Thornton
A former radio and television broadcaster, newspaper columnist, Little League baseball coach, Ron Thornton has been following NASCAR on this site since 2004. While his focus may have changed over recent years, he continues to make periodic appearances only when he has something to say. That makes him a rather unique journalist.
Previous article‘Smokes’ Chase Mind Games
Next articleNASCAR Top-10 Power Rankings: Chicagoland