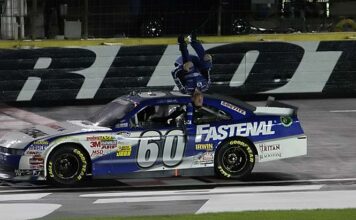 Carl Edwards only led five laps in Friday’s race but they were the ones that mattered. On lap 195, with a little help from teammate Trevor Bayne, Edwards took the lead from Kyle Busch and never looked back, bringing his Roush Fenway Ford into Victory Lane.

“If Trevor hadn’t given me that push,” said Edwards, “we would have had a really hard time. So [it was] just a really, really good team effort.” This was his 37th victory in the Nationwide Series.

Paul Menard, winner of the Coors Light Pole Award, brought the field to green Friday evening at Charlotte Motor Speedway but only led the first 26 laps.

Brad Keselowski seemed to have the most dominant car of the night, leading 119 laps. But on lap 170 he suddenly slowed due to a tire going down.

In the end, it was a battle between Edwards and Kyle Busch with Trevor Bayne making a late charge in the final five laps. But Edwards was able to hold off Busch and the remainder of the field for the win.

Jack Roush, car owner of the No. 60 Fastenal Ford, was ecstatic and a little amazed after the race.

“I think I’m gonna lose my mind here,” he said. He continued, “Carl wrecked his car today and the car decided it wouldn’t give up. I’m going to talk to that car and I’m going to give that car a kiss tonight.”

Angela Campbell
A native of Charlotte, NC, Angela (Angie) was first introduced to racing by her father. An avid fan of NASCAR, she found a way to combine her love of racing with her passion for writing. Angie is also an award-winning member of the National Motorsports Press Association. Follow her on Twitter @angiecampbell_ for the latest NASCAR news and feature stories.
Previous articleDrive to End Hunger Continues in Charlotte
Next articleFord Racing Asks, ‘Is it Glenn or Glen Wood?’