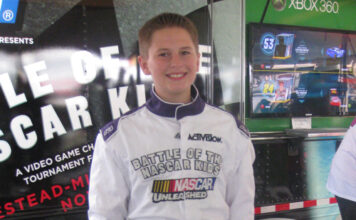 David Gilliland not only finished up the 2011 NASCAR season at Homestead-Miami Speedway behind the wheel of the No. 34 Front Row Motorsports Ford, but he also played the part of proud dad, watching son Todd do some racing of his own, all for charity. [/media-credit]During the Ford Championship weekend, the younger ‘Gilly’ competed in ‘NASCAR Unleashed’, a newly released racing video game. The ‘race’ competition was held at the Speedway with each NASCAR kid choosing a charity for which to donate the winnings.

“I did good,” Todd Gilliland said. “I finished second out of the NASCAR kids. There was one kid that was a wild card and he went all the way to the finals but then he lost. I finished third over all.”

Each NASCAR kid also had to choose a charity for which to compete. Gilliland chose the Sherrills Ford Optimist Park, a recreation center in the family’s hometown that suffered fire damage to their concession stand.

“I chose it because I played soccer there and I might play baseball there,” Todd Gilliland said. “Their concession stand burned down so I thought it might help rebuild it.”

“I’m very proud of him,” David Gilliland said of his 11 year old son. “He picked the park for his charity.”

“We just moved into the neighborhood and their concession stand burned down,” Gilliland continued. “He chose that charity all on his own and I’m very proud of him.”

“I hope I will race like my dad,” Todd Gilliland said. “I race quarter midgets at Bobby Labonte’s track.”

Dad Gilliland is also extremely proud of his son’s desire to follow in his racing footsteps.

“He wants to race and we do as much as we can,” Gilliland said. “We’re trying to think of the next step to take. He’s a good little racer.”

Unfortunately, Gilliland does not feel quite so positively about his own season behind the wheel in the Cup Series. In fact, he would give himself the grade of a ‘C’ for his 2011 performance.

“Our main focus is to get better each week,” Gilliland said. “We started off that way and made progress but we kind of lost it along the way.”

“We are a less funded team and we don’t have the resources like the other teams we race against,” Gilliland continued. “If we blow an engine or wreck, we just dig a hole deeper and deeper. So, we’ll use the offseason to rebuild and make progress to get more competitive.”

While Gilliland is looking forward to improving for 2012, he is not totally sure that he will be back behind the wheel of the No. 34 again next year. As with so many teams in the sport, Gilliland’s team is also one of those struggling with sponsorship.

“I’m not 100% sure about next year,” Gilliland said. “We’re hoping to be back and hoping we can get that worked out.”

“It’s been a difficult time for NASCAR but we’re going to work through it.”

Now that the season is completed, Dad Gilliland, son Todd and the rest of the family are most looking forward to some down time, celebrating the holidays and recharging their batteries.

“We’re going to go to California,” Todd Gilliland said. “And we will go to the desert and go to the sand dunes.”

“I’m looking forward to some time off,” Dad Gilliland said. “We have some fun things planned with the family.”

“I’m excited for the off season,” Gilliland said. “I’m as ready as I’ve ever been for it.”

“But most of all, I’m very proud of my son and all he’s been able to do,” Gilliland said. “Both my kids are on honor roll and do well in school.”

“I’m just a proud dad to have such a great family.”