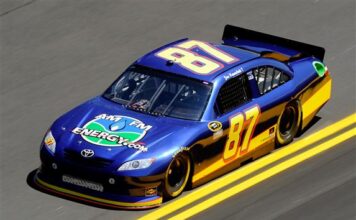 [/media-credit]While the drivers and teams continuing celebrating in Las Vegas, we continue counting down to the 2012 Daytona 500, which is just 87 days away.

NASCAR Hall of Fame nominee Buck Baker was the first driver to use no. 87; using it in NASCAR’s very first race in 1949 at the .750 mile Charlotte Speedway. Baker finished 11th in that race for a payday of $50. Baker used the number in 419 of his 635 starts and accounts for 26 of the 27 wins with the number. The other driver to win using no. 87 is Jim Paschal. Buddy Baker, one of Buck’s sons would use it in 38 starts. Buck would later use the number for son Randy, who made a handful of appearances in the 1980s and 1990s.

Baker would later launch the Buck Baker Racing School in 1980, whose students include Sprint Cup champions Jeff Gordon and Tony Stewart, along with Ryan Newman.

Beginning in 1993, the number became associated with Joe Nemechek, and has been ever since. Nemechek’s first start came in the initial Sprint Cup race at Loudon; a race he was joined in by fellow Nationwide competitor Jeff Burton. Both would move up to the Cup ranks the following season.

After a one year stint with Larry Hedrick in 1994, Nemechek returned to driving his own cars in 1995 with sponsorship from Burger King. This arrangement lasted for two seasons before he left to drive for Felix Sabates.

Nemechek ran the number a few times in the late-90s for road course ringer Ron Fellows. Fellows rang up an impressive runner-up finish to Jeff Gordon in the 1999 Frontier @ the Glen.

In 2009, Nemechek returned to running his own cars; the majority of the time, unsponsored. On a limited budget, Nemechek was the only team outside the top 35 in points to qualify for every race in the 2011 season.