Attack of the inanimate objects 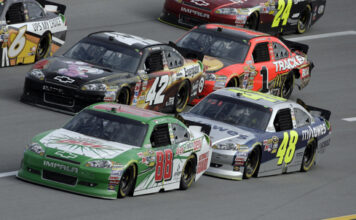 [/media-credit]Contrary to popular belief, the NASCAR hauler, safer barrier and Sprint Cup are actually alive and well. The Twitter accounts for these objects are anyway. These are just a few of the NASCAR-related inanimate objects that have sprung up on Twitter causing a whirlwind of humor and sarcasm in their wake. Who knew a wall or a line could talk (or tweet)?

Some of these accounts are quite comical whereas some are more laid back. Some follow back, some don’t.  But whoever came up with the idea to create these accounts is pretty clever or just has way too much time on his or her hands. Either way, I like it and follow many of them. And if you’re wondering, no I’m not the voice behind any of them.

I’ve been on Twitter for quite some time now and to my knowledge, it was @TheMiniChad (who was previously named @mini_chad) who paved the way for the other inanimate objects to come out and and play.

If you’re not familiar with Twitter, the “Chad” part of the screen name is for Jimmie Johnson’s crew chief, Chad Knaus. The Mini Chad is a (small, not life sized) card board cut out of Knaus that helps the guys in the garage and seems to be quite the ladies man. He (it) also posts a lot of information on the Lowe’s 48 team. All in all, a great follow if you’re a fan of Jimmie Johnson’s. He even has a website if you’re interested: http://theminichad.com/

Another one of the first inanimate accounts (again, that I know of) is @JacquesDebris. And he’s quite a character, let me tell you. Just by looking at that mustache, you already know he’s up to something. He’s always there to help out during the NASCAR races when an extra kick is needed. I always just tell him to “Free The Debris!”

Here, I have compiled a list of the inanimate objects on Twitter for you to follow (if you wish). And that is including some drivers body parts as well. If there are any I may have missed (and I’m sure there are), please feel free to add them in the comment section below.