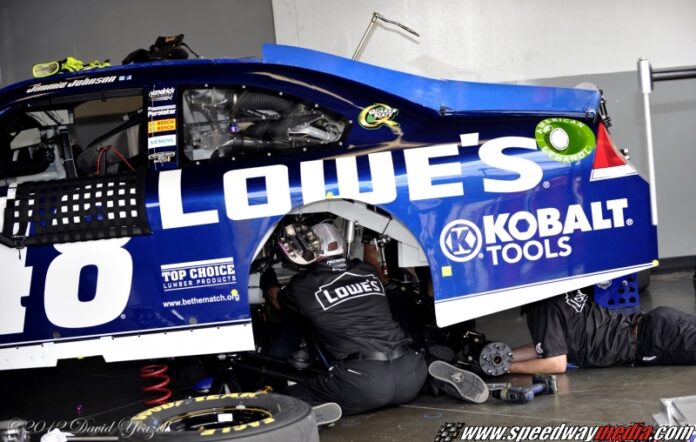 [/media-credit]Most years in February, I’m heading down to Daytona Beach for the opening of the NASCAR season. The last few years, I’ve stayed home for any number of reasons, but mostly because it’s inconvenient for me. I prefer to let someone else cover the opening race while I get ready for my first race at Bristol Motor Speedway. Usually, outside of the new teams and the constant pledges of new starts, little really newsworthy goes on. This year was different.

After the longer than usual off-season, Daytona has been buzzing with news. After months of no news, no TV, and little on radio, even on Sirius-XM’s NASCAR channel, it’s been non-stop interviews on all the air. First was media day with each manufacturer and each team getting interviewed by nearly everyone, and then it was the hype about the Budweiser Shootout. I think it was seven straight times that I heard from Jeff Gordon during that time, but there was some real interesting developments.

It started in earnest with the Shootout. We learned that next year, the exhibition race that started with the pole-winners of the past season and had been changed over the last four or five years to include anyone (almost) who ever raced at Daytona was going to go back to the old format. In 2013, the race will be for Coors Light pole winners and past winners of the race provided that they attempted to qualify for at least one Sprint Cup race in 2012. The interesting part is that the news release does not mention Budweiser anywhere despite the fact that InBev, the corporation that owns the Budweiser brand has a contract to sponsor the race for at least three more years. Stay tuned.

Next came the fantastic Shootout that saw a multitude of bent sheet metal and a killer finish. The car control shown by Kyle Busch was worth the price of admission for those attending and the time for those of us watching on our big screens. It looked like every competitor was having fun despite the carnage and getting along. Fox Sports was rewarded with a great rating and everything seemed to on the upswing. But earlier in Daytona 500 practice, it was revealed that there was another rules infraction and it involved a very familiar team and crew chief.

Once again, it was the No. 48 team piloted by Jimmie Johnson and supervised by Chad Knaus. NASCAR found that the C-pillars on the Lowes Chevrolet were out of compliance and made the team repair the car before they could qualify for the 500. NASCAR assured everyone that this would be dealt with—after the Great American Race. Why? Because it was discovered before practice or qualifying. So Johnson was allowed to qualify with a legal car. Punishment would come later. Johnson’s qualifying day wasn’t so good, but Knaus was still on the job, even though this has become a pattern for this team. The last time it happened was 2006 when Knaus was escorted from the track, but that was after qualifying. It should be interesting to see what penalty he gets. Even though Jeff Gordon is the supposed owner of the team, Rick Hendrick is in fact the owner and he is in denial. He revealed that this was the same car that was raced at Talladega last year when in the intercepted radio transmission between Johnson and Knaus created a stir. To refresh your memory, Knaus told Johnson to spin out and damage the rear of the car if he won. Fishy. You can bet that there will be an appeal, so we’ll see Knaus on the pit box for a while until the appeal is heard.

The Red Bull team that closed last year finally found owners. BK racing is the new Toyota team. Its owner are Cup veterans Wayne Press, Scott Gunderson, and others. The drivers include David Reutimann and Landon Cassill. Travis Kvapil will race at Phoenix in one of the cars and they will carry the familiar No. 83 and the new No. 93. No mention of Brian Vickers anywhere. Vickers says he will be back and he is trying to find sponsors. Good luck, Brian.

So, after the news, we will be looking forward to the qualifying races for the 500. Fords dominated the qualifying, so a strong contingent of Fusions will be starting up front in both races. Also starting up front will be the favorite son, Dale Earnhardt, Jr. Will this be the year? The Shootout gave the faithful some hope. I found it interesting that while Fords dominated qualifying, it was the usual suspects—Gordon, Stewart, Earnhardt, Busch, and others—who looked strong in the race. We didn’t see much from the fast Fords. I’m ready to go racing. Just remember that Trevor Bayne qualified ninth. Could lightning strike again? You just never know.