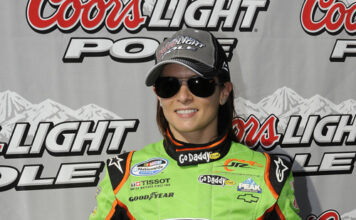 [/media-credit]Following a nasty crash yesterday during the Gatorade Duels, Danica Patrick came back in full force and won the pole for the Nationwide Series DRIVE4COPD 300, which is set to be run on Saturday afternoon.

With a speed of 182.741 mph, this marked the first pole of her career in 26 starts. She also became the first women to win a pole in the Nationwide Series since 1994 when Shawna Robinson won the pole at Atlanta.

For the 29-year-old, she wanted to win the pole not only for herself, but for crew chief Tony Eury Jr.

“Tony builds really good cars and the guys that helped him do that, did a really good job,” she says “I’m really thrilled for Tony Jr.; this is something that he wanted. So for me to push the pedal and give that to him, it feels really good.”

This marks the first Daytona Nationwide series pole for Eury Jr., despite the number of wins at Daytona with his cousin Dale Earnhardt Jr.

Just yesterday, Patrick found himself at the tail end of a bad deal as she hit the inside wall hard after contact from Aric Almirola on the last lap. For most of the event, Patrick had done well, keeping herself in the thick of the action, running as high as sixth.

“I got valuable practice time,” she says. “But it is never a good feeling for me to not be able to drive the car back to the pits and something about me feels guilty when I see that Go Daddy is all broken up along the side.”

The wrecks are a part of the learning curve, no doubt, and Patrick says that she does have lots to learn. After qualifying, she was continuing to pick up tips from her team owner, Earnhardt Jr., by talking with him about side drafting and running the inside line versus the outside line.

Patrick has been working hard at learning everything that she can, which has shown on track. Last year near the end of the year, she was capable of consistently running in the top 15. Elliott Sadler says with what she’s learned, she has become the most improved driver in all of the three series.

“That’s appreciated and I have worked really hard and I’m lucky I drive for a good team that has good resources,” she says. “Tony Jr. is a really, good accomplished crew chief. On the Cup side, we haven’t seen a lot of the great people around me there too, and some really good experience teammates.

“That’s a nice pat on the back; I appreciated that. I still recognize that I have a lot to learn, but I’ve been able to do this in a nice way. I’ve had the backing from the beginning from Go Daddy and it’s been nice because instead of having to go out and show what I’m made of every week, got the most amount spots possible and be desperate. I’ve never had to feel like that. I’ve been able to sit back and observe, not step outside of my comfort zone, because I’ve had a plan since the beginning and so few drivers get that ability to plan long-term and have someone that’s there for them who will follow them wherever they go.”

In looking back to her first ever NASCAR start, Patrick recognizes how far she has come, though.

“I’m pleased with some of the stuff that’s gotten better over the year – I can think of the first race here where I was struggling to keep up,” she says. “Then now you can drop the green flag in a Cup race and I’m just hanging out. I know the rules are different, but the level of comfort and proximity of cars next to each other and front and back, and obviously has been improved.”

With her winning the pole for the Nationwide race, it show strength in the learning curve, but also marks a confidence boost.

“Its always good to have something that brings your spirits up,” she says. “I think when you’re fast like this, it also gives someone an incentive to work with you, if I’m in a position without a teammate or without someone who has talked it over with me. Hopefully it will open up some deals.”

Patrick says that beyond making her feel better, it also gives her some respect and credibility as people will want to work with her. However, she knows that her success tomorrow will all depend on how well she runs.

“It’s going to come down to bump drafting, and being good at that,” she says. “Good at swapping, good at keeping the engine cool, good at keeping in a pack, good at keeping connected, good at strategy so when you pit, you pit with your partner and you don’t get left alone at any point. There’s a lot of stuff that’s going to happen during the race that we’re going to have to manage, so it doesn’t change our strategy. But we do get the first pit box if we want it, which I like that. Not having to wander through a sea of signs looking for my pit box.”