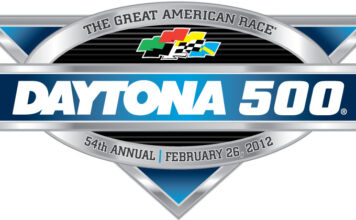 This year’s Great American Race happens to fall on my quarter-century milestone, and what a better way to spend my birthday than with some 200 mph high octane pack racing! My living room will be transformed into a pit of NASCAR fans on Sunday afternoon, but could never rival the ‘stadium-seating’ that was brought in during my brother’s collegiate days in the Delta Sigma Phi house at Clarkson University. This was hands-down the coolest Daytona 500 party I was ever able to (and will probably ever) attend, however I am excited for this year’s racing season to formally kick-off on Sunday.

In an effort to expand the sport’s following I’ve decided to share my Daytona 500 this Sunday with some non-NASCAR/non-racing fans. My living room will be full on Sunday of half die hard’s and half newbies; the die hard’s pleading their case on why each of their drivers are the best and cheer for. Nonetheless, it will be exciting to watch the action in my living room and exciting to see the pack duke it out for one of the most prestigious crowns in all of motorsports.

Just like each restrictor plate race, last weekend’s Bud Shootout turned out to be a roll of the dice. It’s either feast of famine with these races, and I (just like most fantasy players) ended up on the short end of the stick when the dust settled last Saturday Night.

My Dark Horse pick wasn’t really a Dark Horse because he does have 2 wins at Daytona, but like I said last week, the criteria for entrance to the Bud Shootout doesn’t yield many Dark Horses in general. Jamie Mac found the front quickly last week in the first segment, reaching the point just four laps in. He showed that the No. 1 Bass Pro Shops Chevrolet would be a contender all night, leading a total of 5 times for 11 of the 75 laps. My misfortune came on the final lap of the Bud Shootout last week when McMurray was collected in a multi-car incident, which sent the No. 24 of Jeff Gordon for a wild ride on his roof, netting McMurray a 16th-place finish when all was said and done.

My Winner Pick last week is the guy that can “see the air” on the Superspeedways (despite the fact that he hasn’t won in 3 years). Dale Earnhardt Jr. is a fan of the way the racing has morphed back to the pack at Daytona, “I like it better. The closing rate is a little fast. Guys will go flying backwards and forwards. I think we made a lot of great improvements don’t get me wrong. I think we have really made a lot of great improvements and I have more of my destiny in my hands in this type of racing.” said Jr. following his Bud Shootout efforts.

Despite being a bit more comfortable behind the wheel on Saturday Night, Dale Jr couldn’t make it through a lap 55 incident that collected his No. 88 National Guard/Diet Mountain Dew Chevrolet. Jr. finished 20th and I finished the weekend looking like a buffoon.

With complete disregard for claiming to know what I am talking about, I’ve decided to make my picks a little bit differently this week…
It is probably not a great idea because of Ford’s complete dominance of Daytona 500 practice and qualifying sessions, but I would like to have a little fun this weekend for my birthday and also bring in some outside help in making my picks.

Because of my rocky start last week, and the complete craps-shoot it is to choose a driver to win a restrictor plate race, I’ve decided to make my picks based off a total random draw. My picks this week will be based off my girlfriend’s random draw of playing cards (0-9), and I will provide historical data and insight as to why that driver stands a chance to take the Checkered Flag on Sunday Afternoon.

So using Price is Right rules, I will have my girlfriend Casey select four cards at random, and the closest driver (by car number) to the cards selected (without going over of course) will be the drivers I will pick this week for Matty’s Picks.

Here’s a photo of the draw: Via random draw (and a pre-determined list of possible Dark Horses and Winners), Casey selected the 10 of Spades (0) and the 6 of Diamonds. So on the nose for the Dark Horse this week is a Roush Fenway Racing driver that everyone can agree on as a Dark Horse, Ricky Stenhouse Jr.

Not much Sprint Cup history here for my Dark Horse pick, as Stenhouse will make just his second start in the Sprint Cup series on Sunday, but based off his practice speeds, it looks like Casey didn’t do too bad picking my Dark Horse this week.

Last year’s NASCAR Nationwide Series Champion didn’t stretch his points lead when it came to the three races on Superspeedways in 2011, (8th at Daytona in February, 38th at Talladega in April, and 28th back at Daytona in July), but his practice speeds for this year’s Daytona 500 have been nothing to frown at. He was 12th quick in the first practice session, 14th in the second, his highest mark on the leaderboard came in the third practice session, and his most recent efforts landed him seventh in the sixth session earlier today.

I’m not emptying my bank account on Stenhouse for Sunday’s race, but with his Roush-Fenway FR9 Ford Fusion looking strong in practice, I will not count him out just yet.

Casey selected the Ace of Clubs and the Deuce of Spades when it came down to my winner pick, and via Price Is Right rules, (with no driver in the No. 12 car) this would bring us to the No.13 of Casey Mears. I’m not sure that Mears is shown on anyone’s list of ‘Winner Picks’, so I will bypass that pick and head for the No. 14 Office Depot/Mobil 1 Chevrolet of Tony Stewart.

Smoke will be making his 14th start in the Great American Race on Sunday, a race that has evaded him 13 times before. Despite being winless in the big dance, Smoke has tallied an impressive 16 victories at the World Center of Racing including:
3 – Sprint Cup wins in the July race
3 – Bud Shootout Wins
2 – Gatorade Dual Wins
2 – International Race of Champions (IROC) Wins
6 – NASCAR Nationwide Series Wins

This Stewart-Haas racing team is so confident in their chances that after his win on Thursday, Stewart came across the radio and said “Keep it clean, please“. Spotter Bob Jeffrey added “Don’t put anything on our race car. That’s going to be the Daytona 500 winner.”

Seriously, what’s not to like about this? He’s starting third on Sunday and has a race record that rivals anyone in history…

That’s it for this week. I’d like to thank Casey for her help with my picks this week and until next time, you stay classy NASCAR NATION!