Matt Kenseth — The Rodney Dangerfield of the Circuit 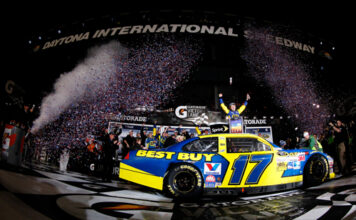 [/media-credit]The Daytona 500 was quite a show. Not only was the race postponed because of rain, but it caused Daytona International Speedway and NASCAR to hold the first ever prime time night 500 in history. That’s big stuff. There was rain and there was fire (had to change that so James Taylor wouldn’t sue), but the same old thing I’ve harped on for ages was present.

Restrictor plate racing will always stick in my craw, no matter how much the general public loves it. It’s simply not racing. It better resembles a demolition derby within a race. Sorry, but that’s the way I feel.

I know many find this racing exciting and probably because of the close racing and, unfortunately, the wrecks, but I just don’t see it. I’ve lost that argument long ago, so no more about that, but the result and the finish was wonderful. In the end, we had a classic battle between two teammates and the most popular driver. In the end, the “unnoticed one,” better known as Matt Kenseth, won going away in a car that doesn’t even have enough sponsorship to finish the season. Jack Roush says the car will be in every race, but the sponsorship isn’t there. What is it about Matt Kenseth that sponsors do not like?

Kenseth came on the scene and beat Dale Earnhardt, Jr. in a battle for the Nationwide Series Championship way back when. He busted on the scene and won a Sprint Cup race his first year. He’s won over 20 times since. Unlike more popular drivers like Jimmie Johnson and Jeff Gordon (not to mention Junior), Matt doesn’t talk much. Reading PR from Chevrolet, Johnson and Gordon can speak paragraphs about any subject. Long sentences and lots of comments are the rule and Matt answers questions and moves on. He prefers his driving to do the talking. And yet, Kenseth is always competitive. If not for that little problem with Brian Vickers at the end of last year, the Chase might have been a three-way race instead of the two man race we had.

Then, to take away from Kenseth’s great win, we had the fire. If it wasn’t enough that we had rain on the first race of the season, a freak accident became the main focus of the race. Juan Montoya had a suspension part break that caused him to crash into a jet dryer which produced a terrifying fireball. It took nearly two hours to put out the fire and clean the track. Will anyone remember Matt Kenseth win his second Daytona 500? No. But the fire? Absolutely. Talk about bad luck, but that’s been the case with Kenseth his whole career.

He won the Sprint Cup Championship in 2003 with his consistency, but the fact that he only won one race, might have caused NASCAR to move to its own playoff system known as the Chase. His first Daytona 500 victory was rain shortened. Maybe he’s the Rodney Dangerfield of racing. He gets no respect, despite his exemplary record.

One last thing. NASCAR ruled on the rules infraction for the No. 48 team today. The result was suspension of crew chief Chad Knaus and the car chief for six races and probation and a huge fine for Knaus beyond that. The team and driver Jimmie Johnson were penalized 25 points making them -25 for the season. Many think the punishment is too harsh since the car failed inspection before practice. Rick Hendrick thinks that since the same car (or so he says) passed inspection four times without problems, that the penalty is bogus. He is appealing the penalty, but we all know how this has gone on in the past. The suspension will stand when NASCAR gets around to hearing the appeal. It may make Knaus available for Phoenix, but you can bet he’ll be gone for some races sooner or later. I don’t know why they bother. Maybe it’s to lessen the blow, but I think the penalty was less than expected given the history of this team.

Ron Fleshmanhttp://www.ris-news.com
Ron Fleshman has followed NASCAR racing since attending his first race at Martinsville Speedway in 1964. He joined the Motor Sports Forum on the CompuServe network in the 1980s and became a reporter for Racing Information Systems in 1994. In 2002, he was named NASCAR Editor for RIS when it appeared on the World Wide Web as www.motorsportsforum.com. He can now be found at www.ris-news.com. Ron is a member of the American Auto Racing Writers and Broadcasters Association. You can find Ron following and reporting on the top three NASCAR divisions each week. As a lifer in his support of racing, he attends and reports on nearly 30 events a year and as a member of the motor sports media, his passion has been racing for 47 years. He lives with his family in rural West Virginia and works in the insurance industry when not on the road to another track.
Previous article
NOTES FROM THE NASCAR NATION: FUN IN THE VALLEY OF THE SUN
Next article
Daytona 500 Review: The Good, The Bad, and The Jet Dryer