Kvapil’s future is still in doubt 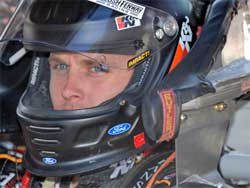 Getting a job in the Sprint Cup Series is tough as it is. The economy doesn’t help either.

Travis Kvapil is a former Camping World Truck Series champion. One would believe teams would be throwing themselves at him after his departure from Penske Racing several years back at the completion of the 2005 season.

For the past few seasons, Kvapil drove for the underfunded Front Row Motorsports team. FRM is owned by Bob Jenkins, who owns a series of restaurants such as Taco Bell, Long John Silver, and other multi-million dollar businesses.

At the end of 2011, rumors swirled around the garage about David Ragan signing with FRM once he was released from his former team Roush Racing. Eventually, Ragan signed with FRM. The team also resigned David Gilliland and Josh Wise in the team’s second and third cars, leaving Kvapil without a job heading into 2012.

“That was tough, last year we didn’t have the results we hoped and by the end of the season we put some good runs together. But speaking for them, they were looking at different sponsorship opportunities and eventually landed with David Ragan and they had more sponsorship for things like that and it was a decision they made and they had to look at all opportunities and they’re definitely looking better,” said Kvapil on what made him leave FRM.

Lucky for Kvapil, a new team was forming out of the defunct Red Bull Racing shop.

Kvapil reached out to one of the new owners, sparking talks across the board as both sides were interested in working with one another.

“It all happened pretty quick, but it was a bit of a process for them,” said Kvapil. “It took longer than they expected to get everything together and we didn’t get everything going and the green light until February first, but we have great equipment and some really good people with guys that work really hard.”

It was announced that Kvapil will drive the car after the Daytona 500 where David Reutimann drove the No. 93 Toyota Camry to a 26th place finish in the team’s debut. But, it remains unclear if he will step behind the wheel for every race, or he will be replaced by Reutimann in the select races where he does not drive for Tommy Baldwin Racing.

“It’s not a done deal from what I’ve been told. They’ve talked to me about David Reutimann running for the team, but I think that’s still to be determined as time gets closer to those races. Hopefully, I can go out there and run competitively and have a chance of staying in the car,” said Kvapil.

But, if Kvapil is replaced by Reutimann, it could mean the partnership may last only one year, if that.

“They’ve been straight up with me from day one. They might do something with David in those races, they might not, they didn’t promise me anything that they can’t do. I knew the deal going into it so either its 26 races or the rest of the races,” Kvapil said. I’m thankful for the opportunity. They didn’t promise me more than 26 races, but there’s a possibility of running 35.”

The last time Kvapil qualified for all 36 races was back in 2008, the year he drove for Yates Racing, finishing 23rd in the standings. After the first six races in 2009, Kvapil was released from Yates as the team eventually shut down, due to sponsorship woes.

This time around, Kvapil’s situation is different, much different.

With a possibility of being replaced in several races, Kvapil has to focus on himself more than ever.

“I think it’s harder for the team to work with multiple drivers as the relationship between the driver and the team takes some time to build and you’re changing drivers then you kind of mess up the chemistry,” said Kvapil on whether or not it’s a good idea for BK Racing to split the No. 93 Burger King Toyota throughout the 2012 season.

Expectations for the new team are rather high, well at least according to Kvapil. He believes the team is capable on finishing in the top 25 on a weekly basis and eventually, making it to the top 20.

Fortunately enough, Kvapil took a car which qualified 41st and turned a bad run into an exceptional one as he drove up to 19th place by the time the checkered flag flew this past Sunday at the Phoenix International Raceway. The team proved they’re at the track to run competitive and not just ‘start and park’ like many expected.

Kvapil will head into the Las Vegas Motor Speedway this weekend with a renewed outlook on what it takes to run upfront. He and teammate Landon Cassill are ‘dark horses,’ but the two have much to prove.

For the entire BK Racing organization, the plan is to run the entire season with Cassill in the No. 83 with Kvapil and possibly Reutimann in the No. 93 with cars from the former Red Bull Racing team. How will they fare remains to be seen. They are off to a strong start, continuing this will easily look themselves in the top 35 in owner points by Bristol.

As a pure racer, Kvapil is determined to revamp his career once again. He is off to a strong start in 2012. His season may progress in a positive or negative way. But, it’s the chance he needed to prove he didn’t forget how to drive considering he outran both FRM drivers, Ragan and Gilliland on Sunday at Phoenix.

SM Staff
Previous articleRCR Brings Force to Reckon With in Nationwide Series
Next articleAndy Hillenburg: The Man behind Bringing NASCAR Back to Rockingham Speedway