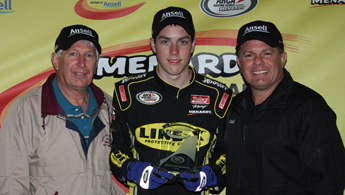 He is off to a good start as he led practice and won the Menards Pole Award presented by Ansell. He drove a qualifying lap of 17.547 seconds to put his No. 22 Dodge for Cunniongham Motorsports on the pole for the first time.

“We have a great eBay Motors and St. Jude’s Dodge,” the 18-year-old from Tucson, Ariz said after qualifying. “I can’t thank all the guys at Cunningham Motorsports enough. I’ve always been terrible at qualifying, quite honestly, and for us to get a pole definitely shows how good the car is. We’ll definitely have a good race car tomorrow. Look for us up front.”

Bowman credits the success to a test earlier in the year.

“We came here and tested a few weeks ago, and it’s a pretty neat place,” he said. “It’s like Madison, and similar to Motor Mile (in Virginia).”

16-year-old Chase Elliott will start his first ARCA race on the front row along side Bowman, driving the No. 9 Aaron’s Dream Machine/Hendrickcars.com Chevrolet. Elliott, the son of NASCAR Champion Bill Elliott, has turned heads so far with his success. Last year in the K&N Pro East Series, he scored three top-fives and six top 10s in 12 starts. In 2010, he scored 13 victories, 29 top-five finishes, 39 top-10s and six pole awards in 42 Late Model starts. One of the notable accomplishments was winning the Miller Lite Series at Mobile International Speedway.

Starting third will be another rookie as Eric Jones will become the first 15-year-old to start an ARCA Racing Series race, driving for Venturini Motorsports.

“We started off on new tires and worked really hard on the whole package, the drivability of the car,” the Bryon, Michigan native said after practice. “It was fast, just not quite the feel we wanted. We worked through the whole practice and finally got what I wanted.

Jones comes into the ARCA Series with a lot of success, as he won the 2011 JEGS/CRA All-Stars Tour Championship, winning at Rockford Speedway and Owosso. He also won the prestigious Governor’s Cup, leading every lap in the super late model race in Florida.

The 200-lap, 100-mile Mobile ARCA 200 will begin at 2 p.m. Central tomorrow, with live timing and scoring and live audio coverage available at ARCARacing.com. WNTM Fox News Radio 710 AM (Mobile) and WTDR Thunder 92.7 FM (Talladega) will produce and air the broadcast for ARCARacing.com, and also air the race to a network of Alabama radio stations. The race is scheduled as the second of 20 this season.