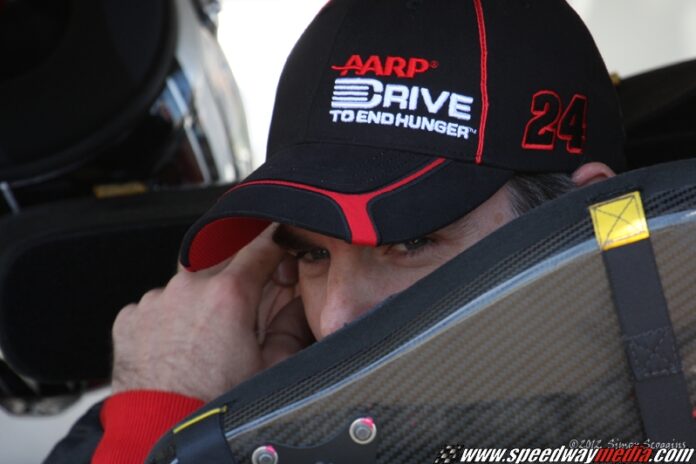 [/media-credit]While it may be a bit early to talk about Jeff Gordon making the chase for this year’s championship, he has already made Chase a new partner in his AARP Drive to End Hunger initiative.

Chase Card Services, a division of JPMorgan Chase & Co., just announced the renewal of its corporate commitment to assist AARP and Jeff Gordon in the effort to end hunger for seniors across the country.

“Our work with Chase is very important to the AARP Foundation,” Jo Ann Jenkins, President of the AARP Foundation, said. “Nearly 9 million older Americans don’t know where their next meal will come from, so we appreciate the generosity of Chase and the entire NASCAR community.”

Chase will be sponsoring the No. 24 Drive to End Hunger Chevrolet at five races over the course of the season, starting with the upcoming race at Bristol. The company will donate $0.03 for every purchase made with their AARP Visa Card from Chase, as well as donating $1.00 for each new account opened.

This new partnership between Chase, Jeff Gordon and AARP will raise up to $2 million total this year, all for the Drive to End Hunger initiative.

“We’re excited to continue supporting the AARP Foundation through Drive to End Hunger,” Ralph Pinto, Senior Director of Chase Card Services, said. “We are looking forward to having a greater presence through Jeff Gordon and the sponsorship of the No. 24 Drive to End Hunger Chevrolet.”

“Over the course of the five races we are sponsoring, we will have a number of different activities that we are pursuing, all focused on raising awareness of older Americans who are hungry,” Pinto continued. “Some are at track and others will be via email or Jeff Gordon’s landing page, all aimed at gaining the support of the passionate NASCAR fans for this important cause.”

While their partnership together into NASCAR is relatively new, Chase and AARP have been working together for quite some time. In fact, they have partnered in various endeavors for the past twenty years.

“We’ve worked with AARP for a very long time and over the course of the past twenty years or so, we’ve looked for different opportunities to work together,” Pinto said. “About two years ago, AARP made this Drive to End Hunger a huge priority for them.”

“Concurrently, we were looking at our card and trying to revamp the benefits that we were going to be offering on the card,” Pinto continued. “So, we decided that we would look at a couple of various options and one thing that we found was that older Americans were positive about giving to charity.”

In fact, Chase not only received anecdotal feedback from their customers but also formally surveyed them as well. The study, Chase’s first Generational Giving Survey, found that older Americans give to charities more generously than most other Americans.

“We conducted a fairly extensive survey and 63% of Americans age 55 plus have donated $100 or more to charity, which is more than those under that age,” Pinto said. “More than one third of older Americans donated more than $500 to charity.”

“Even from a business perspective, older people will connect and this has basis in fact,” Pinto continued. “So, for us at Chase, this is something we can feel good about.”

After deciding that donating to charity was an important card benefit to Chase customers, the company had to make the next critical decision, that of choosing the charity that would benefit. And of course, the company’s first thought was of their long-standing partnership with AARP.

“The AARP Visa Card and the Drive to End Hunger just made perfect sense,” Pinto said. “We are more than happy to jump on that and partner with AARP on this venture. “

“The Drive to End Hunger is such a great fit for Chase,” Pinto continued. “The partnership is a great way for Chase to give card members something that they’ve asked for—a way to give back, simply and automatically.”

Pinto is the first one to admit that he was a novice to the sport when he first became involved in the Drive to End Hunger partnership. But while he may have been new to NASCAR, attending his first race at the Monster Mile, Pinto and his fellow Chase colleagues have embraced the sport wholeheartedly.

“The race was amazing,” Pinto said. “It was absolutely awesome.”

“I for one was shocked,” Pinto continued. “I went outside our booth and just the noise when they all started up was like a wall of sound. It was the most impressive thing ever.”

Pinto and his Chase colleagues have been impressed not only with NASCAR and their renewed partnership with the Drive to End Hunger program, but also with their driver, four-time champion Jeff Gordon.

“The first event we did was at Chase headquarters in Wilmington, Delaware,” Pinto said. “Jeff Gordon came to the event and they brought in his Drive to End Hunger race car.”

“We packed meals for older Americans and in one hour we packed about 400 meals and sent them off to a local food bank,” Pinto continued. “It was very exciting. Jeff is such a great spokesperson and so believes in the cause.”

“Jeff is just an absolutely wonderful person to work with,” Pinto continued. “He is very dedicated. He didn’t have to be at the food distribution that we were running but he showed up and was there.  He’s not only a great spokesperson for us but an even better spokesperson for AARP.”

While Pinto knows that the new Chase card benefitting Drive to End Hunger will be a huge success, he is also now hoping for one other important success.

“I just hope that Jeff Gordon’s car comes up right in front at the end of the next race!”