Junior Nation Got Excited, But in the End, It was the Nine That Mattered 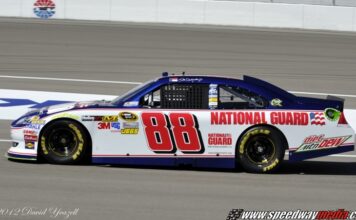 [/media-credit]For just one moment, Junior Nation was in heaven. It lasted more or less 70 laps. Dale Earnhardt, Jr. was everything his fans wanted him to be. He took off at the beginning and moved out to a large lead, but the first pit stop came and though Junior took off again, it wasn’t long until the stronger cars of Tony Stewart, Jimmie Johnson, Matt Kenseth, and Greg Biffle. Therein lays the problem. In today’s Sprint Cup, there is a definite pecking order, not only between brands and teams, but competitors.

It’s unfortunate that it’s come down to this. Hendrick has Johnson and Gordon. Roush has Edwards and Kenseth, RCR has Kevin Harvick and well, Kevin Harvick, Gibbs has Kyle Busch and Denny Hamlin, and the Hendrick satellite team has Tony Stewart. That’s nine drivers that will win most of the races. That’s not to take anything away from Junior, Kasey Kahne, Greg Biffle, Jeff Burton, Paul Menard, Joey Logano, and Ryan Newman. It’s just the way it is. From time to time, those guys will win and others like Trevor Bayne will impress, but the truth of the matter is this race comes down to Johnson, Gordon, Edwards, Kenseth, Harvick, Kyle Busch, Hamlin, and Stewart. Most of the races in 2011 were won by these guys. In 2012, Kenseth, Hamlin, and Stewart have won races despite the fact that others appeared to have better cars. On this Sunday, Stewart had no one to challenge him, which must really bother the Hendrick guys since they get their cars and engines from Rick Hendrick. Although Kenseth and Biffle and Junior tried, Tony just drove away.

So here’s the dilemma. How long will fans stay with this sport when it’s so obvious that only nine drivers really have a chance, week after week, at the win? With NASCAR seemingly all aglow with good ratings and an uptick in attendance, it has become apparent that the only thing that will make it last is close racing and guys like Junior and drivers other than the big nine coming through with wins. Last year we had Regan Smith, Trevor Bayne, and David Ragan surprising. The year before, we had Jamie McMurray, but so far no indication that this will happen in 2012. Yes, NASCAR needs for Junior to become successful, and some of those outside of the fabled nine to win, but will it happen? That will be the key to sustaining the good ratings and popularity of the sport.

And for those who want to go back to the 60’s and remember King Richard Petty’s dominance, please remember that he didn’t win every race, and in fact, lots of drivers won races from every manufacturer and every team. Bill Elliott won 11 races in 1985, but Darrell Waltrip won the championship. Cale Yarborough won six races in 1968 and Lee Roy Yarborough won as many in 1969, along with the great run of David Pearson after that. Dale Senior won lots of races, but the others won too. If every race comes down to the nine, I don’t know what will happen to attendance and ratings.

It’s kind of like Dodge introducing a new car on Sunday with no drivers lined up to drive it. If one of the nine doesn’t, what difference does it make?

Ron Fleshmanhttp://www.ris-news.com
Ron Fleshman has followed NASCAR racing since attending his first race at Martinsville Speedway in 1964. He joined the Motor Sports Forum on the CompuServe network in the 1980s and became a reporter for Racing Information Systems in 1994. In 2002, he was named NASCAR Editor for RIS when it appeared on the World Wide Web as www.motorsportsforum.com. He can now be found at www.ris-news.com. Ron is a member of the American Auto Racing Writers and Broadcasters Association. You can find Ron following and reporting on the top three NASCAR divisions each week. As a lifer in his support of racing, he attends and reports on nearly 30 events a year and as a member of the motor sports media, his passion has been racing for 47 years. He lives with his family in rural West Virginia and works in the insurance industry when not on the road to another track.
Previous article
Blaney finished 29th; Reutimann finished 31st
Next article
Smoke and Mirrors in Vegas But Mostly Just Smoke