Smoke and Mirrors in Vegas But Mostly Just Smoke 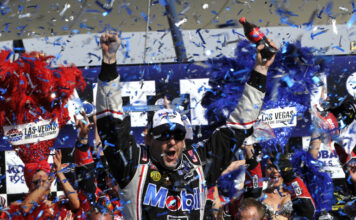 [/media-credit]The lights, the anticipation, the atmosphere of chance, the courage to gamble, it was Vegas and it was all about Smoke and mirrors. Ok maybe just Smoke.

The Sprint Cup race had a very exciting ending, a daring move from a skilled and popular champion to hold off the challenge from a determined fellow competitor, the race in it’s entirety was rather long and drawn out. Unless of course you were a Dale Jr fan. If you were a member of JR. Nation you were still flying high over the strength and dominance shown by the 88 early on in the race, leading the first 70 laps in a dominating fashion. But a pitstop for 4 tires when the rest of the field took 2 mired the 88 back in the field and he just couldn’t quite recover. “We’re just a little bit disappointed,” Earnhardt Jr. said. “Our car was tight at the start of the race, and we were fast. But I knew before the end of the race I was going to have to free my car up.

“I never let (crew chief) Steve (Letarte) do it. I never told him enough and gave him enough freedom, I guess, to feel like he needed to free the car up. Every time we got in traffic, our car was just really tight.”

If you were a Jimmie Johnson fan you were more than likely not using much of the seat of your chair. Johnson whose car was lightening fast and very very consistent, started in the 43rd position and worked his way as high up as first. But he could not hold that position and finished 2nd to the current reigning Cup Champion Tony Stewart. “We had a great race car all day long. I wish we could have had this KOBALT Tools Chevrolet over in Victory Lane for the KOBALT race. But, we’ll just have to try it again next time. Great race car. To be out here in a back-up (car) and to drive from dead-last to the lead, and then finish second is pretty awesome. Hate coming up short. Glad to be on the West Coast and see all my fans. Look forward to doing it again soon,” stated Johnson.

The man of the day was “The People’s Champion” Tony Stewart. He earned that title with moves like the three wide pass for the lead on Brad Keselowski, who had an EFI system failure on the last restart and finished 4 laps down to the field. Stewart who had only taken 2 tires was aware of the 4 tire cars behind him, “I had to go man (laughs). I knew that Matt (Kenseth) had four tires and Greg (Biffle) and those guys had better tires than we did. I knew as long as we could get to clean air we could at least hold them off for a little bit. I just didn’t know we were going to be able to hold them off for the whole run.”

Hold them off he did to win on one of three tracks he had never won on in his 45 career victories. But perhaps the biggest sigh of relief came not from the driver but from his crew chief. Steve Addington was feeling the pressure of assuming the role of crew chief of a championship team. “I’m going to tell you, everybody has been awesome. Nobody put the pressure on me except myself. I really didn’t realize how much I’d put on myself going to work for the championship team the very next year. It’s been a lot of pressure. I think that even when Tony feels good about the car, I’m still questioning. He’s just like, Relax, dude, it’s going to be all right.”

The new EFI system again showed itself to have a bug or two still needing to be swatted. Brad Keselowski reported via twitter that,” Just to be clear. On the last restart, the engine ran out of fuel, the fuel tank still had gas. This means, the fuel system had a problem. 2 & 22 car broke fuel pumps. Fuel pump stopped delivering fuel. Important for me, to defend my 2 team today. Great strategy & speed, we had the numbers crunched right… Just need some (work) on fuel system.”

This is the third race with the new EFI system and there have been issues in all three races. McLaren insists their system is not to blame and that it is a matter of a lack of education. If that is truly the case, then as the creator and provider of the system is it not their responsibility to train and educate the teams on the system its short comings (all systems have short comings) and its strengths? Should they not be responsible for teaching the engineers to trouble shoot the system? Should they not be working with drivers and teaching them signs and symptoms of an impending problem so that it can be headed off before it becomes terminal?

I understand coming into the modern world. I understand that change is essential for the survival of the sport. I understand that if we don’t take care of the planet we live on we will be trying to find down force to race on the moon. But it appears to me that McLaren brought their attitude of we can do nothing wrong with them from F1. Truth their stuff was not bullet proof over there either. Don’t misunderstand I think the system is awesome and can be made workable and easy for these teams. But the answer according to McLaren themselves lies in the education of the people using the system. It’s time now, three races in, for NASCAR to say ok we have had another problem it’s time for you to come over here and sit down and teach and train. If that doesn’t happen soon, the likelihood of a catastrophic occurrence will continue to grow.

The other piece of this scenario is that fans watching at home were never informed of what happened to Brad Keselowski or AJ Allmendinger’s cars. We were just told they were laps down suddenly after seemingly having the cars go away. That lack of disclosure makes the picture fogged and cloudy.

I mean we are all use to the lack of bias from the booth. The announcers have their favorites and like every other fan make sure you know it. Three times in the last 30 laps DW said that Jimmie Johnson was just going to drive by Tony Stewart when he cleared traffic because he had the best car on the track and it was a back up car. Larry McReynolds could not allow JR. Nation to share their drivers glory during the 70 laps of dominate racing by the 88, saying he was not convinced because they couldn’t put a whole race together. Mike Joy made sure we knew during the last stretch of the race that Tony Stewart had never won at Vegas even though he had a heartbreaking finish a  year ago that Jimmie Johnson had won numerous times.

But not one time other than to comment that Keselowski’s Blue Deuce was falling through the field like a rock did they ever tell us what happened to it or what they had had to do to fix it that put him 4 laps down to the field.

The purpose of the commentators is to inform and fill in the gaps that we can’t see or hear from home. It is not to shove their favorites and opinions down our throats. Now please note I have the greatest respect for Darrell Waltrip but he tends to speak first and see what happened or is going to happen later. McReynolds it seems would rather choke to death on a chicken bone than say anything nice about Dale Earnhardt Jr or his Steve Letarte lead 88 team. It would seem that Mike Joy feels equally as strong about Tony Stewart and the Office Depot/Mobil 1 team. This particular broadcast team seems to have forgotten that their job is not to color the race or the fans opinion of it, but instead to bring it to you from a perspective that you don’t have sitting at home.

The race was not incredible. It was consistent. It had highs and lows. The end of the race was once again incredible. But it was the last 35 laps of the race. The first 232 laps were well unremarkable unless you are a member of Jr. Nation and then the middle 162 were unremarkable. NASCAR needs to find a way to put a whole race together. Maybe next week in Bristol that will happen.

Congratulations to Tony Stewart, Steve Addington and all of the Stewart Haas team on their victory. Smoke showed once again why he is one of the top 5 drivers in the world today. Congratulations to Ricky Stenhouse Jr. and his Roush Fenway Team on their Nationwide Series Victory. And ok for my own personal feelings here Congratulations to Joey Saldana on his victory at the World of Outlaws Napa Know How So Cal Showdown and also to Dustin Morgan and Danny Wood on their wins in the ASCS Sprint Car competition in Yuma this weekend.

SM Staff
Previous article
Junior Nation Got Excited, But in the End, It was the Nine That Mattered
Next article
Surprising and Not Surprising: Kobalt Tools 400