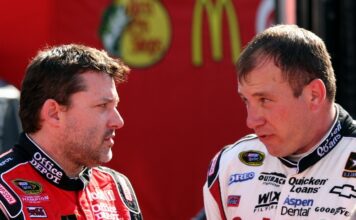 [/media-credit]While the spotlight may be on Tony Stewart, his Stewart-Haas Racing teammate Ryan Newman is quietly having a good season so far as he sits 12th in points.

“We didn’t have the car that we had at Daytona last year but at Phoenix, I put ourselves in a bad situation by crashing the primary car,” he says. “Then we got crashed going for fifth in the race with 50-some laps to go. I think our cars have been good. We’ve got the monkey off our back, so to speak, at Vegas with a lucky chance to get up there in fourth and with the No. 17 (Matt Kenseth) and the No. 5 (Kasey Kahne) having their situation.

At the end of the 500 laps at Bristol Motor Speedway, Newman came home in the 12th position to match his spot in points.

“I’m just really proud of the guys,” he says. “They’ve worked really hard. It’s obviously been a very hectic start to the season with some rain delays and west coast trips and things like that. But they’ve done an excellent job.”

While teams are continuing to look for advantage, NASCAR has thoughts of closing that up by releasing the EFI data to race teams. Newman says that in the past, it’s been easy for NASCAR to keep it simple and old school.

“The EFI opens up a lot of doors,” he says. “They’ve given us a couple of channels to be able to review when it comes to brake-pressure and throttle position. It’s nice to see those things to compare, but like you said; it does have a catch-22 side to it and that’s the fact that if it is a secret, then it’s no longer; and if it is an advantage, it may not be anymore.”

Newman says that drivers can look at the data to see the differences, but putting it to practical use, it may not be as easy.

“I can look at Tony Stewart’s curve and try to match it and I can’t do it with my race car or with the line I’m running or whatever,” he says. “It’s not so much as simple as that as it is as it is that it just gives us an idea of what to maybe change or try at different race tracks. And obviously, that’s going to change as we go into the second race after we can look at some data; it’s all new to us right now. So, it’s an interesting perspective on a change when it comes to technology.”

As Newman heads to Auto Club Speedway in Fontana, California, it will be another chance to emerge from the boss’ shadow. It won’t be easy as Newman’s average finish at California is 14.4. However, Newman may choose to keep himself hidden as that way it gives him the chance to sneak up and pounce on the competition.