Excuses Aside, It’s Not the Economy 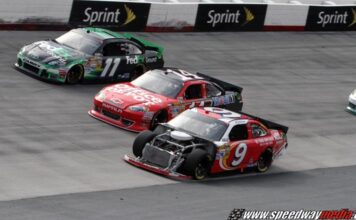 [/media-credit]It started on I-64 shortly after leaving Beckley, West Virginia. The trip to Bristol Motor speedway is only 180 miles, the second closest track (to Martinsville) from my home in rural West Virginia. Stopping at a restaurant in Princeton was all talk about the race coming up in two days. It was Friday and many were traveling to the race. Cars with plates as far away at New York were there, and on a quick trip to the restroom, I got my first feedback.

“This is my last trip to Bristol. I’ve given up my season tickets,” said John from Pennsylvania. “They ruined the track. Used to be the survival of the fittest and now it’s more like the half-miles we see all the time. I may go back to the night race after this year, but they can have the spring race.”

From Scott from Ohio, I heard, “this whole coliseum thing and all the hype is just so sad. When they changed the track, it took away Bristol. Sure there were wrecks and cautions, but it was exciting and it’s not exciting today.” Scott is also giving up his tickets. He plans to go to Charlotte instead. “At least it’s easier to get in and out of that track.”

Finally, I talked to my campground neighbors. One of them, Barry from Georgia, was distraught about how boring both races were. “I love racing,” he said. “The problem with this race is that it’s only 250 miles and used to be lots of action. In the Busch race, it was follow the leader and in the big race, it was the same. The drivers love it, but I don’t. I’m going back to Atlanta. I heard so much about this place and started coming in 2006. I can only afford a couple of these a year and this is not a good value.”

And so it goes. The most discussed topic on NASCAR radio today was “Old Bristol” vs. “New Bristol.” The reason was the lack of fannies in the seats at both the Nationwide and Sprint Cup races. Last year, it was appalling, but this year was worse. No matter what the projections of attendance was, the place looked empty. I know there are 160,000 seats there, but it looked like only a few were there on Saturday and only a few more on Sunday. In fact, friends told me that they had their pick of seats both days. The concourses, once full of people, were sparse and traffic resembled a minor league baseball game. Why has Bristol fallen so far?

Apparently, the track knew what was going to happen. Articles in local papers proclaimed that the economy was the culprit, according to those stories. Yes, the local economy, though bad, is no worse than anyplace else. According to those that know, many suites that corporate sponsors had taken for years were cancelled. Add to that the total dissatisfaction with product among the core fans and you get this reaction. The night race will always be fascinating, but the other races? Not so much. Locals stayed away, but many others did too.

One of the basic principles of entertainment is you have to give the people what they want. You can’t run hundreds of commercials talking about how this is the toughest place to run and then watch two and three wide racing. You cannot let the NASCAR media people, many who depend on the sport for a living, to keep telling fans that this is racing as it was meant to me, and not a demolition derby like we had. Folks, the people paying the bills, liked it the way it was and no matter how much the people at Speedway Motorsports and the talking heads want to spin how wonderful Bristol was since 2009, the fans disagree and they are the ones who pay the bills. If they aren’t happy, nobody’s happy. Brad Keselowski’s proclamation that things change is a typical response from someone who hasn’t studied history. You might say if it isn’t broke don’t fix it. They fixed it and thousands of fans decided it wasn’t worth it. The track won’t change and the crowds will probably be the same as we saw this weekend. What could have been…

So Bristol is over and we head to another track that no one cares about, seemingly even the people of Southern California. We’ll see three-wide racing and a lot of racing like we saw this weekend at Bristol. My heart aches. Once upon a time it was different. We had the bullrings and the speedways and for one moment, someone thought we had to make Bristol like the speedways. And it was a mistake. At least in these old eyes. But there is a silver lining to all of this. I wrote a column last year that said that Martinsville is the new Bristol. I stand by that. It’s a shame that we couldn’t have had two of those, but then again, it’s been the way things have been going for some time.

Ron Fleshmanhttp://www.ris-news.com
Ron Fleshman has followed NASCAR racing since attending his first race at Martinsville Speedway in 1964. He joined the Motor Sports Forum on the CompuServe network in the 1980s and became a reporter for Racing Information Systems in 1994. In 2002, he was named NASCAR Editor for RIS when it appeared on the World Wide Web as www.motorsportsforum.com. He can now be found at www.ris-news.com. Ron is a member of the American Auto Racing Writers and Broadcasters Association. You can find Ron following and reporting on the top three NASCAR divisions each week. As a lifer in his support of racing, he attends and reports on nearly 30 events a year and as a member of the motor sports media, his passion has been racing for 47 years. He lives with his family in rural West Virginia and works in the insurance industry when not on the road to another track.
Previous article
Trio Of Truck Series Drivers Step Back In Time With Visit To Martinsville Museum
Next article
Ryan Newman Quietly Having Good Season in Owner’s Shadow