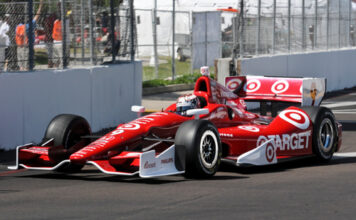 [/media-credit]As the Izod Indy Car Series kicks off its new season on the streets of Saint Petersburg, There was a bit of anticipation about how the new DW-12 chassis would really prove out, granted most of the teams had just completed extensive testing at Sebring just a couple weeks ago, and all seemed to be pleased with the overall performance, and the drivers would agree the car drove well but no one expected the results obtained in Friday’s two practice sessions in preparation for this week-ends’ Honda Grand Prix.

The practice sessions provided lap times a little more than one second faster that the pole speed in 2011, Speeds are expected to climb as the week-end progresses. Scott Dixon was fastest in the morning session, with Will Power topping the afternoon session; other notables included defending champion Dario Franchitti, Helio Castroneves, Ryan Briscoe, and perennial favorite Tony Kannan.

This edition of the Honda Grand Prix of Saint Pete could be a record breaking event, tickets are still available, visit the Grand Prix’s website for a complete rundown on today’s’ practice speeds, and how you can purchase your tickets for this event.