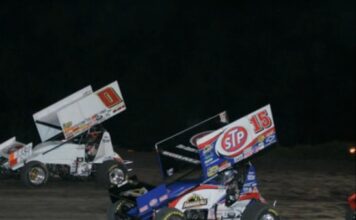 [/media-credit]The Mini Gold Cup is a two night race for the World of Outlaws that has the reputation of being a top drawer event. But this year’s first night was anything but top drawer. The racing was fierce and every position was hotly contended for. But that was because the track was a narrow single groove dry slick surface that continued to take rubber quickly. By the end of the A Main what you saw was patience and skill from some of the best dirt drivers in the world, because they were racing on a track that was maybe ¾ of a groove wide.

The evening started out with a threat of weather looming. The activities were hurried along in an attempt to beat the weather and get in the show because the forecast looks even worse for tomorrow nights activities.

The track record was set in 2009 by Joey Saldana with a lap of 10.918 seconds. Quick Time was set by Kraig Kinser with a lap of 12.458 around the ¼ mile track. He was closely followed by the seasons only two time winner this year Tim Kaeding, with the rest of the top 5 in qualifying being Jac Haudenschild, Steve Kinser, and Sammy Swindell.

The heat races showed some incredible moves by the Outlaw stars. Among them, a full power slide by Jason Sides out of the second turn to take over two places and the lead in one corner. Cody Darrah made a strong showing by moving from 8th to first to win the second heat but showed little after that. Stand out Kyle Larson was having an unusually off night and was sent to the pits in the second heat after having two unassisted spins. Donny Schatz dominated heat 3 leading from flag to flag. And Joey Saldana would make a power move to the outside of Bill Rose down the back stretch to win the fourth and final heat of the night.

The Dash inversion would determine the fate of many of the drivers in the A Main as the track would begin to take rubber, lose grip and narrow its groove significantly. The inversion drawn by quick time holder Kraig Kinser was a 6. Sending Kinser to the 6th spot out of 10, it was a position he would not advance beyond during the dash. As a matter of fact only two drivers would better their starting position in the dash, Tim Kaeding and Lucas Wolfe. And they would only increase their positions by one spot when the checker flag waved. Donny Schatz would take the checkers after starting on the dash pole.

With the first 5 rows for the A main set, the B main went off without issue. But again the track narrowed and the starting order was nearly a mirrored image of the finishing order. Jac Haudenschild, Kyle Larson, Chad Kemenah and Trey Starks would start and finish 1 thru 4 transferring to the A Main.

For Donny Schatz winning the A Main came down to three things, 1) Patience 2) Tire Management 3) Reading the groove on the track as the race progressed. “You just had to be cautious not to spin your tires and slip up out of that bottom groove,” Schatz said. “There wasn’t a lot of moving around. There were guys trying things, but just couldn’t make anything work. You had to be on the bottom of the race track, right on the gutter. As long as I stayed there and tried to keep from making a mistake, I was going to be ok.”

The A Main was only interrupted by 2 cautions the first when Kyle Larson spun out of 2 on lap 23. By that time the track conditions had deteriorated to the point that the restarts were made single file rather than the normal double file per Outlaws procedure. The second came on lap 34 and set up the Green White Checker finish when Robby Whitchurch blew a right rear tire and came to a stop in turn 4. When the green flag flew for the last time Schatz was amazing as he held his line and never smoked a tire until the final lap coming to the checkered flag. He had lead the entire race from beginning to end. He smoked a tire one time off of four on the checkered flag lap.

“I just fell in behind Donny and tried to learn something,” said second place finisher and last years King of California winner, Jonathan Allard said. “I’ve been known for not managing my tires as well as we could have, but the Goodyears lasted, we came home with second and we’re very proud of that. I was hoping maybe Donny would get into traffic, but he was too smart to do that.”

Joey Saldana had a stronger comment about the surface and the racing it produced. ” I want to apologize to the fans. The World of Outlaws puts on a much better show than this and I am really sorry you all didn’t get to see a better show. Maybe the track will be in better condition tomorrow night,” stated Saldana from the podium.

The bottom line comes down to every series no matter who they are or what they drive has a bad night once in while. There is only so much that the sanctioning body can control. Weather and a poor track surface are high on the list of things that they can’t control.

But if you really watched the racing tonight you got an amazing show of the skills that it takes to make the best of the bad situation and maximize the finish. Schatz lead from flag to flag, picked up his second win and extended his points lead. But he did it by managing the situation he was given. He raced smart and he raced patient. He didn’t drive over his head and tear up the tires.

The old time warriors of the outlaws were evident tonight. They made passes. Maybe only one. But they finished with tires on the car and the car in one piece. They maximized their situation the best that circumstances allowed. It was an amazing thing to watch. No there weren’t many daring slide jobs or sliding above the buffer to beat a guy to the straightaway. But to watch the skills of driving dirt in a 12 second lap and never smoking the tires and driving straight off and still maintaining the speed and balance of the car, now that was an E ticket ride for the experienced race fan.

Hopefully tomorrow night will be better. But if not I am sure Donny Schatz is ready to race Mother Nature for the Mini Gold Cup once again.