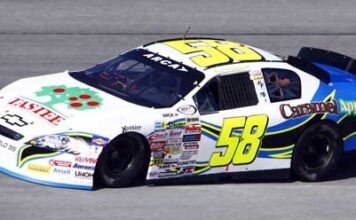 [/media-credit]While watching a race from Daytona on television, Chad Hackenbracht became interested in racing and told his parents he wanted to race.

“They told me to brush it off over a couple of weeks,” he tells the story. “After a couple of months, I said ‘What’s going on? Am I going to race?’.”

His parents told him to come up with some possible options to go racing in, to which he responded go-karts and four wheelers. His parents turned both of those options down.

“My mom said no to four-wheelers,” he continues. “My dad said no to the go-karts just because they don’t have seat belts. So when you wreck, the object is to get away as far as possible from the kart by flying out of it.”

The end result was the family buying a quarter midget to race in the Mid Western Quarter Midget Association to begin his career.

Flash forward to the present day and Hackenbracht is now a competitor in the ARCA Racing Series for CGH Motorsports, currently sitting third in points.

With points leader Cale Gale not expected to compete in all the races this season, Hackenbracht currently sits second of the full-time series drivers, 10 points behind Brennan Poole.

“So far, we’ve run really well,” he says. “Daytona is sort of a crapshoot and we were running pretty good, got shuffled out to the outside. But we came out with a clean racecar, ready to go to Talladega.”

Last weekend at Mobile, Gale scored another second place finish while Cale Gale went on to win the race.

“We’re really satisfied with that so far,” he says. “Can’t really ask for too much more.”

He is also on track with his expectations for 2012 as he expects to run in the top five while contending for the championship.

Before they can get to that point, he is hoping that a sponsor comes on board.

That’s why it’s important to get off to a good start, but also so that way they’re not in a hole.

“When you’re trying to work your way up in points from 40th, it just makes for a long year,” he says. “It takes a lot more to get up front if you don’t start at the beginning of the season.”

If things come together, Hackenbracht and team are ready to head to Salem Speedway next month.

“If we go there, I picture a win because every time we’ve been there the past few times, we’ve run top five and had the fastest car all day long,” he says. “We have just had something mechanical happen. So expectation is definitely a win and top five qualifying, but hopefully we can come out of there with a good finish and maybe the points lead.”

A lot of people looked to Hackenbracht and CGH Motorsports to have a successful 2012 season based on last year.

Last season, he scored three top fives and 10 top 10s on his way to finishing eighth in points and impressing many people near the end of the season due to being a small, family-based team. Hackenbracht doesn’t consider it being a bad position to be in.

“It’s not too tough when you have the right people, and I think we definitely do,” he says. “We’re definitely a small organization – we’ve only got three full-time guys. Kevin Reed came over from Venturini (Motorsports) and he’s done really well. He’s definitely stepped up our program. It’s not really tough to run against any so-called big name teams because once you get out there, it’s up to the driver. If you have the ability, then you’re going to be able to run with them.”

Hackenbracht says one of the biggest lessons he learned last year was patience.

“You’ve got 200 laps on these short tracks and you don’t need to going all out racing somebody for three or four laps, wearing out your equipment on lap 100,” he explains. “You don’t really have to use your equipment because it gets really hectic there at the end and that’s where you start getting the runs and able to go for the win with about 50 to go.”

The patience factor is something he has in common with his racing hero – Mark Martin.

“He’s a real clean racer and everyone sort of respects him and there’s not too much controversy surrounding him,” he says.