Surprising and Not Surprising: Auto Club 400 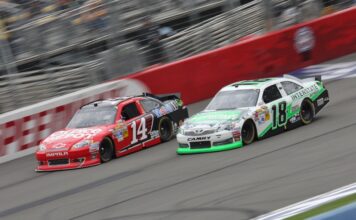 [/media-credit]While sunny during pre-race activities, weather came in and played a prominent role at the Auto Club Speedway in Fontana, California. Here is what was surprising and not surprising in the 16th annual, but first ever rain-shortened, running of the Auto Club 400.

Surprising:  While the race was caution free until the predicted rain appeared, the most surprising issue, other than weather, affecting the racing was that of problems on pit road. Even with the shortened number of laps run, there were five pit road speeding penalties, including Regan Smith, Joey Logano, Bobby Labonte, Brad Keselowski, and J.J. Yeley.

Other penalties were doled out to Jamie McMurray, driver of the No. 1 Bass Pro Shop/Allstate Chevrolet for a lug nut violation and Matt Kenseth, behind the wheel of the No. 17 Ford EcoBoost Ford, who had to go to the tail end due to a team member not being in contact with the outside tires.

The most costly errors on pit road, however, occurred for four-time champion Jeff Gordon and his No. 24 Drive to End Hunger Chevrolet crew. Gordon had two penalties; one on lap 107 for removing equipment, including the gas can man himself, from the pit stall and the second one on lap 126 for a tire rolling beyond the center of pit road.

“It was just not our day on pit road,” Gordon said simply.

Not Surprising: It was not surprising that the reigning champ proved that age 40 is just about the perfect time to peak in NASCAR racing.

Tony Stewart, behind the wheel of the No. 14 Office Depot/Mobil 1 Chevrolet, scored his 46th victory, tying Buck Baker for 14th on the all-time Cup Series win list.

“I mean you hate to have them end with rain like that,” Stewart said. “But I’ve lost some that way. The good thing is we didn’t back into the lead because we stayed out, the leaders came in.”

“I mean, we were leading the thing and had earned that spot,” Stewart continued. “I’m proud of that.”

Surprising:  Usually somewhat morose after a race, Dale Earnhardt, Jr. surprisingly deemed himself “pretty happy.” The driver of the No. 88 Diet Mountain Dew/National Guard Chevrolet finished third in the race and moved up to third in the point standings as well.

This was Junior’s fifth top-10 finish in 20 races at Auto Club Speedway.

“We had a really good car,” Dale Junior said. “I was really happy about that.”

“We drove the car up to fifth before the weather came,” Junior continued. “We made the right choice by staying out and building ourselves into the top three.”

Not Surprising:  On a day when the driver of the No. 18 Interstate Batteries Toyota led laps, clipped the wall, and then had to work his way back up front, it was not surprising to see Kyle Busch score the runner up spot.

‘I wish we would have been able to race the whole thing on one hand, but on the other hand I’m kind of glad we’re not because we kind of had a little bit of damage that slowed us down there,” Busch said. “All in all, it was a really good day.”

Surprising:  It was a bit surprising that the driver who not only finished sixth in the race, but kept the points lead too, just was not all that pleased at the end of the race festivities.

“I like this track but the last few times here, we’ve been off just a tick,” Greg Biffle, driver of the No. 16 3M Ford, said. “Today, I didn’t keep up with the track.”

“I was a little bit too tight.”

Not Surprising:   As so often happens, it was not surprising that the pole sitter did not win the race. In this case, pole sitter Denny Hamlin was well positioned to do so, however, pitted prior to the rain, which relegated him to an 11th place finish.

“We were planning on the race going back to green,” the driver of the No. 11 FedEx Express Toyota said. “We had finally gotten to Stewart’s bumper when the rain came.”

Surprising:  Granted, the race was rain-shortened, however, it was still surprising to see Kurt Busch in his new No. 51 Phoenix Construction Chevrolet score a top-10 finish, the best of the season for both the driver and his team.

“This just goes to show what results when you are smart all day,” Busch said. “The car’s going back onto the trailer without a scratch on it.”

“That’s a first for us this year.”

Not Surprising:  Martin Truex, Jr., to no one’s surprise, continued flying the flag for Michael Waltrip Racing with another good run. The driver of the No. 56 NAPA Auto Parts Toyota finished eighth and is now sixth in the point standings.

“Overall, it was a decent day,” Truex, Jr. said. “This place was really tough on us last year.”

“It’s nice to come in here and have a decent run – something we can build on.”

Surprising:  It was a bit surprising that the driver known as ‘The Closer’ did not seal the deal at the Auto Club Speedway. The driver of the No. 29 Jimmie John’s Gourmet Sandwiches Chevrolet finished fourth and is just seven points behind the points leader in the standings.

“All in all, the guys on the Jimmy John’s Chevrolet did a pretty good job,” Harvick said. “We will just keep working away.”

Not Surprising:  Jimmie Johnson, not surprisingly, seems to be well on his way to living up to his Twitter moniker of ‘Six Pack.’ After a successful appeal that restored his points and kept his crew and car chiefs intact, Johnson survived an oil leak to finish top-10 in the No. 48 Lowe’s/Jimmie Johnson Foundation Chevrolet.

“We were really happy with the performance.”