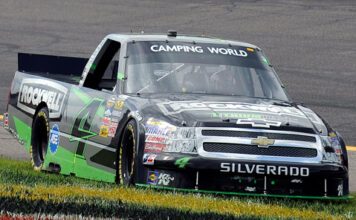 Kahne described this as “the best weekend I have had in a long time.” He drove in three races this weekend with three impressive finishes; third place in the Nationwide Series in Texas, seventh place in the Cup race, and the win at Rockingham. [/media-credit]He went on to explain how happy he was to be a part of the event.

“When I heard they were putting a race on here at Rockingham, as soon as I heard about it, I was trying to figure out whom I would race for and how I would make it here,” he said.

He only got about 4 ½ hours sleep the previous night but that did not dampen his enthusiasm.

“Coming to ‘The Rock’ I was so excited that I woke up early. My alarm was supposed to go off at nine this morning and I woke up at 7:30 and couldn’t go back to sleep.”

‘The Rock,’ under the guidance of Andy Hillenburg, opened its arms to the fans allowing them access to the infield and pit road, areas that are normally out of bounds for most ticket holders. Golf cart shuttles were available to take fans to their seats. They were limited but if you didn’t mind waiting, you could catch a ride. The atmosphere was more like a family reunion than a sporting event.

Everyone from the staff to the fans to the drivers was excited to be a part of the track’s return to NASCAR.

Nelson Piquet Jr. led the field to green on a sunny Sunday afternoon in the Good Sam Roadside Assistance 200. He led a total of 107 laps during the race and was dominant most of the race.

Points leader John King spun out on lap four, hit the inside wall and brought out the first caution.

Piquet continued to lead the field and had just lapped the tenth place car when a debris caution was called.

Kasey Kahne started in the rear of the field but quickly worked his way into the top three battling with Matt Crafton and Nelson Piquet Jr. for the lead. Kahne took over the lead on lap 155.

On the final pit stop Piquet Jr. was caught too fast exiting and had to go to the back of the field, ending his bid for a win. He fought his way back to finish the race in seventh position.

Peter’s fifth place pushed him to a six point lead in the point standings over Justin Lofton. Ty Dillon is third, followed by James Buescher and Parker Kligerman.

Ty Dillon finished in eighth place and was the highest finishing rookie.

The next Camping World Truck Series race will be April 21, 2012 at Kansas Speedway.

Angela Campbell
A native of Charlotte, NC, Angela (Angie) was first introduced to racing by her father. An avid fan of NASCAR, she found a way to combine her love of racing with her passion for writing. Angie is also an award-winning member of the National Motorsports Press Association. Follow her on Twitter @angiecampbell_ for the latest NASCAR news and feature stories.
Previous articleLap by Lap: Good Sam Roadside Assistance 200 won by Kasey Kahne
Next articleMark Martin praises MWR and teammate Martin Truex Jr. after Texas