Pocono Preps for Tire Test and First Race without Patriarch 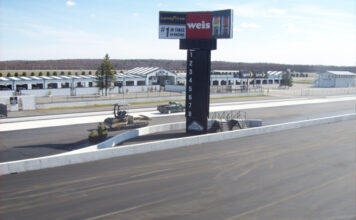 [/media-credit]Pocono Raceway, thanks to the mild winter, has been abuzz with activity, including a total track repave and preparations for the upcoming tire test at the end of this month.

Yet all of these activities have been undertaken with an eye to heaven and under the watchful eye of the late ‘Doc’ Mattioli, the track patriarch who passed away earlier this year.

“The repave was pretty much a top to bottom reconstruction of the track,” Brandon Igdalsky, President & CEO of Pocono Raceway and grandson of ‘Doc’ Mattioli, said. “We went all the way down to the base of the track and put three or four more new layers.”

Similar to the recent repave done in Michigan, Pocono track officials realized that, after sixteen years of wear and tear, it was time to get some new asphalt down on the ‘Tricky Triangle.’

“The asphalt had just lived its life and it was just time to do it,” Igdalsky said. “It was 16 years old and a lot of use on it with the race and all the other events throughout the year.”

“That all adds up over time, as well as the freeze/thaw cycles we get each year takes its toll.”

While Igdalsky checked out the pavers used by some of the other tracks, he finally decided, for many reasons, to use someone closer to home for the repave.

“We talked to the pavers that did the ISC and the SMI tracks,” Igdalsky said. “There’s a couple companies out there that both of them use.”

“But with all the scheduling of the other tracks getting done, it wasn’t going to work out,” Igdalsky continued. “We have a relationship with a local, major paving operation here in Pennsylvania.”

“They came in and did a fantastic job.”

And was the repave costly?

“It cost a lot,” Igdalsky said simply, with a chuckle. “It’s a hefty chunk of change. I’ll leave it at that.”

But best of all, the repave has made the 2.5 mile track even faster than it was before.

“I took a lap on the new surface and it’s smooth and fast,” Igdalsky said. “I can put my Tahoe into Turn One a lot faster than I could before.”

“If I can do that in my Tahoe, I can’t imagine what they’ll be able to do in a Cup car.”

While Igdalsky predicts the repaved track will be fast, Igdalsky refrained from predicting exact speeds that may be reached on the new asphalt.

“The grip in Turn Three is so much better now,” Igdalsky said. “So, if they can get through Three and get a nice smooth run and they were hitting that 205 mph speed before, I can see them running at least five miles an hour faster.”

“When we repaved in 1995 and when they came back that following June, they were seven miles an hour a lap faster on average,” Igdalsky said. “So, if we can get five or six miles per hour on the new asphalt per lap, the average lap time will be good.”

“I’m excited to see what they’re going to do when they get here in two weeks, especially seeing the speeds they were getting in Michigan.”

While Igdalsky may be excited about the speeds, he admitted that he has been a bit worried about getting the repaving done in time for the scheduled Goodyear tire test.

“It definitely kept me up at night,” Igdalsky admitted. “I’ve been worried about getting the repaving done before the tire test and we got it done.”

“Now it’s a matter of how it will react to the test and how the drivers are going to like it.”

The all-important tire test has been scheduled for April 24th and April 25th at Pocono Raceway. Goodyear engineers will test a variety of compounds that will determine the best tires to be used for the June 10th Pocono 400.

The drivers tentatively scheduled to participate in the Goodyear tire test at Pocono are Jamie McMurray, Kasey Kahne, Joey Logano, A.J. Allmendinger, and Aric Almirola. The drivers will represent all of the major teams, from Hendrick Motorsports to Richard Petty Motorsports.

The test is open to the public and fans will be permitted to watch both days of testing from the grandstands free of charge.

“We’re going to do some stuff with the drivers coming in but we don’t know how the schedule will go,” Igdalsky said. “It’s Goodyear’s show and they dictate what we do and don’t do.”

“Goodyear is all about getting these tires tested and figuring out what they’re going to use and not use,” Igdalsky said. “It’s a pretty busy day for the Goodyear guys as well.”

As the Pocono President and staff prepare for the tire test, they are also in full preparation mode for the race. Yet all of these preparations are being done with somewhat heavy hearts as everyone at Pocono continues to fill the void left by the passing of patriarch ‘Doc’ Mattioli.

“As we move into a new chapter at Pocono Raceway, everyone is excitedly nervous,” Igdalsky said. “We’re all biting our nails for good weather but we’ve got some help with my grandfather up in heaven.”

“He’ll do his best come June 10th to give us a nice, exciting weekend.”

Igdalsky said that it has certainly been different at the track without the dominant presence of his grandfather.

“Strange is an understatement,” Igdalsky said about the atmosphere without ‘Doc’. “I really miss my weekly sit-downs with him and going over everything with him.”

“Personally, I miss him more than anything in the world,” Igdalsky continued. “And I know as a staff we miss him terribly.”

“That first race is definitely going to be hard for everybody,” Igdalsky said. “Not seeing him up there on the Victory Lane stage for the start of the race will be like nothing we’ve ever experienced before.”

In spite of the grief, however, Igdalsky and his family take great comfort in knowing that although ‘Doc’ is gone, Rose Mattioli will still be present throughout the race weekend.

“We’re putting her to work this year,” Igdalsky said of his grandmother. “She will definitely be there.”

“Once we’ve past the tire test, we’re into worrying about the race and the show it’s going to put on,” Igdalsky said. “So, June 10th at 7:00 pm when all is said and done, I’ll be happily cracking a bottle of champagne, toasting the heavens, and celebrating.”