Ward and Jeb Burton Continue a Family Tradition of Racing 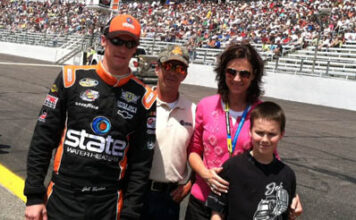 Ward Burton has always had a special relationship with “The Rock.” His first win in the Cup Series was in 1995 at Rockingham Speedway. He has a total of nine top ten finishes at the track in the Cup Series and also scored his first Nationwide Series win there in 1992. At the time, his wife was pregnant with their son, Jeb.

Burton retired in 2007 but this past weekend, Ward was back with his son Jeb at the historic track. Jeb made his second Camping World Truck Series start Sunday at the speedway. During the race he fought his way back from a 27th starting position to score an eleventh place finish.

I talked with Ward and Jeb Burton Saturday morning to gain some insight into how the two worked together as a team. It was obvious from the start that Jeb respects his father’s driving expertise. He even watched some tapes of his Dad racing at Rockingham Speedway in preparation for his race at the track.

Jeb admits that most of the time he feels like “the best way to learn is just to do it myself.” But he’s also smart enough to take advantage of his Dad’s experience. “When I was running late models and my car wasn’t where it needed to be, I would put Dad in it to see what he thought. He would get it running right and make me look good.”

Ward is heavily involved in his son’s career and often also gives him advice during the race. Sometimes the two agree and sometimes Jeb’s crew chief Trip Bruce has to act as mediator.

“When we’re running good everything is fine,” Jeb says.

However, when they are having a bad day, his Dad can get a little intense. Jeb is quick to point out that “it’s only because he wants me to run well.”

Jeb is scheduled to run the next three races in the Camping World Truck Series. The goal is to run as many races as he can but for now, sponsorship is limited.

When I asked what he felt he needed to improve upon, the answer was simple. “I need more seat time. I need to be in a racecar every week.”

He also feels that it’s important to test, especially on the larger tracks where he has no experience. Another important factor is “understanding the vehicle and working with the crew chief. If you can get that chemistry right, it makes everything easier.”

As we ended the interview so Jeb could get ready for practice, I asked him what he would consider a good finish at the conclusion of this race. He quickly said “a top 12.” After the race ended Sunday afternoon, I congratulated Jeb on meeting his goal. But like a true racer, he wasn’t satisfied with his finish, believing he could have done more.

Jeb is currently scheduled to run the next three races in the Camping World Truck Series. While he works on getting more sponsorship, Jeb will continue to run late models.

Now it was time to hear the other side of the story as I sat down with Jeb’s dad, Ward Burton.

I asked Ward if he had encouraged or discouraged his son when it came to racing.

“I didn’t really do either,” he told me. “He came to me about wanting to start racing motorcycles. I had given him go-karts and all that when he was a lot younger but he pretty much made the decision that it was something he wanted to do. He got into motorcycles real quick, went to go-karts and pretty much progressed from there.”

The biggest challenge for Ward is learning how to be on the sidelines.

“Oh, definitely I’ve had to learn all over again. You’ve got the danger factor and you’ve got the not in control factor. You’re trying to learn how to communicate. Instead of doing, it’s how to do. It’s quite different. Having a father and son relationship while it’s going on, like any father-son relationship, can certainly add some complications,” he said, laughing.

“I did it to my Dad; my Dad probably did it to his Dad,” Ward continued. “You know when your Mom or Dad says something to you, you don’t take it the same way as when somebody else says it to you even if it’s said the same or meant the same. Sometimes it’s hard to take something that is meant as constructive criticism, constructively.”

Communications can also be tricky when it’s a father on one side and a son on the receiving end of those communications. Ward tries to let the crew chief handle that side of things.

“I try my best but sometimes it’s not possible. That is definitely the best way. It took me a while to learn that and I’m still learning. At the same time, if I see something going on with anybody on the team including Jeb, I’m not going to sit back without trying to be helpful.”

Jeb’s career is a work in progress and something that Ward works on every day. He believes in his son and what they can accomplish together.

“I’ve been working vigorously, along with others, to find opportunities for Jeb. He’s got a window in which I can possibly be productive and help him. That window is not forever. I can’t solely make it happen.”

His commitment is unwavering.

“I know that if I get the opportunity with a company I don’t feel like anybody can do a better job for that company on and off the track than Jeb and I can. I honestly believe that. But I have to have the doors open to prove it to them.”

“We certainly appreciate State Water Heaters and they’ve gotten us to this point. They’ll be an associate for the rest of the year. But I want to be racing with Jeb after Dover.”

Ward and Jeb Burton make a formidable team and are determined to add another chapter to the Burton legacy in NASCAR.

Angela Campbell
A native of Charlotte, NC, Angela (Angie) was first introduced to racing by her father. An avid fan of NASCAR, she found a way to combine her love of racing with her passion for writing. Angie is also an award-winning member of the National Motorsports Press Association. Follow her on Twitter @angiecampbell_ for the latest NASCAR news and feature stories.
Previous articleTeam Chevy Advance
Next articleNASCAR Top-10 Power Rankings: Texas