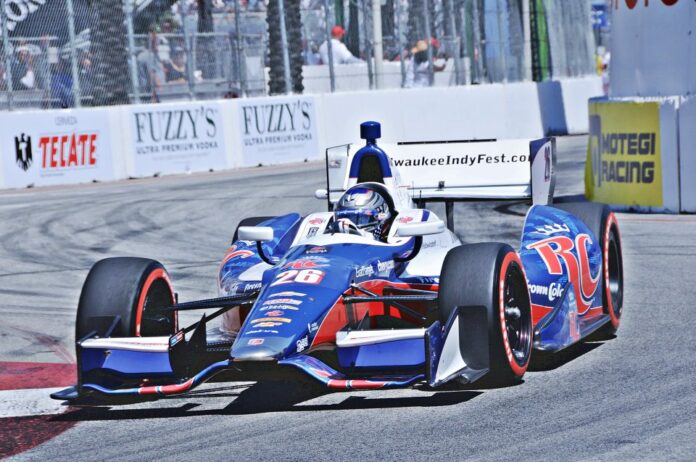 [/media-credit]Following a lap 22 incident during the Toyota Grand Prix of Long Beach, IndyCar officials have placed IZOD IndyCar Series driver Graham Rahal on probation for the next six events for blocking and initiating avoidable contact.

The probation will end following the June 23rd event at Iowa Speedway. If Rahal does not meet necessary improvements, IndyCar may impose further penalties.

“Due to the inability of the No. 38 car to continue the race, a review of the on-track actions of Graham Rahal became a post-race issue,” Beaux Barfield,

IndyCar president of competition and IZOD IndyCar Series Race Director, says.  “All stewards have reviewed the incident and have decided that the on-track actions of Graham warranted probation because of driving that endangers on-track safety and adversely affects competition.”

Rule 9.3.2 states “a driver must not alter his/her racing line based on the actions of pursuing drivers to inhibit or prevent passing. Blocking will result in a minimum of a black flag “drive through” penalty.”

Rule 9.3.3 states “a competitor must not initiate or attempt to initiate avoidable contact that results in the interruption of another competitor’s lap time or track position.”

Following the incident, Andretti called Rahal out on the block.

“There’s a difference between blocking and chopping and that’s chopping,” he said following the wreck. “I was lucky I didn’t get upside down; I could’ve been killed.”

Rahal’s response was, “I was just trying to stay underneath (Scott) Dixon and obviously I surprised Marco. He wasn’t going to make the corner no matter what. If he stayed beside me, he was going to overshoot it. It’s just frustrating. The car felt really strong.”

The probation penalty may be protested pursuant to the rulebook.