Michael Annett Is Flying High Yet Under the Radar 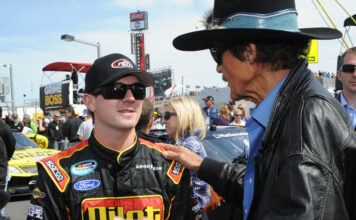 Yet, as high as the young driver of the No. 43 Pilot Flying J Ford Mustang is flying early in the season, he still is very much under the radar in a series dominated by the likes of veteran Elliott Sadler, reigning champ Ricky Stenhouse, Jr., up and comer Austin Dillon, and Danica Patrick.

“To me, that’s how I’ve lived my whole life,” Annett said. “Even when I played hockey growing up, I never did anything outlandish.”

“I was just the guy that got the job done,” Annett continued. “That’s pretty much my M.O. and how it’s been for me in my racing career.”

Although flying under the radar so far this season, the new Richard Petty Motorsports driver has had some impressive initial success, especially with his recent run at Texas. Annett finished ninth, rebounding from running into a lapped car and taking advantage of the lights going out at the speedway.

“We probably could have won the race if I hadn’t run into a lapped car,” Annett said. “But I loved it when the lights went out because we were overheating and getting ready to pit.”

“So, I liked that the lights brought out the caution,” Annett continued. “The whole night was about overcoming adversity, so to come out ninth and to see the guys faces with a top ten finish, it was cool.”

“I think the success started with what Roush Fenway built last year with the championship and the relationship we have with them,” Annett said. “That partnership is huge.”

“At Texas, we unloaded and we were close but we were still missing a little bit,” Annett continued. “To be able to go and talk to the No. 6 team and use some things they found, it’s just a huge advantage to us.”

In spite of early success at Richard Petty Motorsports, the reality for Annett was that he had to make a difficult  transition rather abruptly when his former team, Rusty Wallace Racing, shut down at the end of last year due to lack of sponsorship.

“It was definitely tough, very unfortunate and a testament to the economic times,” Annett said of the demise of his former team. “They couldn’t find a sponsor for Steven (Wallace) with 5-Hour Energy leaving.”

“Rusty said he didn’t want to do it out of his pocket,” Annett continued. “So, the month before Daytona, they announced they were shutting down and we had to go find a place to race.”

Fortunately for Annett his long-time sponsor, Pilot Flying J, stuck with him and gave him the opportunity to seek out another team. He was especially pleased when Richard Petty Motorsports ended up being one of the teams interested in him.

“I’m definitely blessed to have Pilot as a partner that I’ve had since I’ve started racing,” Annett said. “That enabled me to go to other teams and when I went to Richard Petty Motorsports, it just felt right.”

“It felt like a family, listening to Richard (Petty),” Annett continued. “He and I saw eye to eye on everything and it felt right.”

Annett said it hit him how fortunate he was to be with Richard Petty Motorsports when he and the team went out for their first race together at Daytona in the Drive4COPD 300.

“It’s funny,” Annett said. “It didn’t hit home to me until Daytona when Richard (Petty) was standing on one side and Dale Inman on the other side, both giving me pointers before I got into the car.”

“And all I could think was ‘this is crazy,’ Annett said. “I’ve ridden on the plane with Richard and talked to him and the best way to put it is that I’m blessed. It’s pretty cool.”

The other ‘cool’ discovery for this low-key driver was his new crew chief at Richard Petty Motorsports, Philippe Lopez.

“I had no idea about Philippe Lopez before this season started,” Annett said. “His name got brought up and I didn’t know a thing about him.”

“When I asked around, there is always somebody who doesn’t like somebody, but not one person had anything bad to say about Philippe,” Annett continued. “That’s pretty cool.”

“From Daytona to now, there hasn’t been one mechanical problem and his confidence on the radio is huge,” Annett said. “It’s been a really good relationship.”

After his strong run at Texas with his new crew chief and team, Annett will have another off-weekend before heading to Richmond International Raceway next weekend for the NASCAR Nationwide Series 250.

“Richmond is one of those tracks that I’ve struggled at,” Annett said. “But each time, we go back, I get better.”

“I think I finished 11th or 12th last time so if I crack the top-10, I know that we’ll have had a good race,” Annett continued. “At Richmond, if you get the right car, you can come out of there with a top-5 or a win.”

Yet even with his impressive start to the season and in spite of having total upheaval in his team, the young driver is not one often mentioned in the Nationwide Series discourse.

“I don’t mind it, but I worry more about the guys on the team because I want them to get the credit they deserve,” Annett said. “I was hoping that at Daytona when Dale Jarrett started talking about me that would be the start of things.”

“But I’ve fallen back into my old ways of just getting my job done, under the radar,” Annett continued. “But where we finish and the results will show themselves.”

“And if they want to talk about us, they will,” Annett said. “My guys still know I’m driving my butt off for them and they’re doing the same back to me.”