From domination to frustration for Edwards and Stewart in Richmond 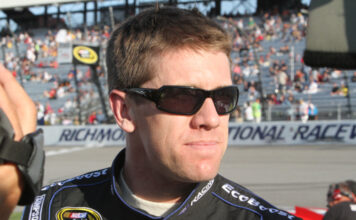 [/media-credit]Saturday night in Richmond wasn’t the first time that the fastest car didn’t win the race.

But neither Tony Stewart nor Carl Edwards were happy or accepting about the ways in which they lost the Capital City 400. Stewart felt he had the win taken away from him, first from NASCAR then his pit crew.

Edwards wasn’t too pleased with NASCAR either after he received the black flag with less than 90 laps to go. NASCAR officials ruled he had jumped the restart, ordering him to serve a penalty, which took him out of contention.

It all started during a caution on lap 311 during green flag pit stops when Jeff Burton hit the turn three wall. Everyone except for Edwards had already pitted and returned to the track.

Jimmie Johnson was on pit road when the caution came out, he was listed as the leader. Except he’d have to serve a penalty for a tire violation putting which in turn put Stewart back into the lead.

Heading for the restart Stewart and Edwards lined back up with Stewart on the inside and Edwards on the outside.

However, the scoring tower had Edwards listed as the leader, how? From images provided by viewers after the race it shows that Edwards was cleaning his tires when he crossed the start/finish line ahead of Stewart. In doing so says NASCAR vice president of competition Robin Pemberton, the transponder on his car scored him crossing the line ahead of Stewart, even though he technically wasn’t the leader.

The team and Edwards had no idea what had occurred and genuinely believed they were the leader. When the green flag flew Edwards took off and left Stewart in the dust. That’s when NASCAR deemed he jumped the start, having gone before the designated restart area.

Stewart took back the lead; Edwards served his penalty in confusion and frustration. From the car Edwards called for NASCAR to correct themselves but to no avail, saying they had taken the win away from him.

He went on to get lapped by Stewart, then to get the lucky dog before eventually finishing 10th. Afterwards he still wasn’t happy and went to NASCAR looking for answers.

“I am trying to not be too frustrated and say something stupid,” said Edwards before talking with NASCAR. “So right before that [restart] my spotter Jason Hedleskey was told by NASCAR officials that the 99 was the leader, the 99 is the leader. Jason told me and I had a split second to decide what I was going to do.

“I thought, ‘okay, NASCAR made a mistake and they lined us up wrong.’ I was at a disadvantage being on the outside so I thought I was getting the best start I could get. It looked like Tony waited or spun his tires so they black-flagged me. I still don’t understand why they black-flagged me. They said we were the leader and I restarted the best I could given the disadvantaged position I was in.

After his meeting with NASCAR and hearing their explanation, Edwards didn’t have as much to say. And still didn’t believe that he had done anything wrong.

“We had to just agree to disagree and that’s the way it is,” he said. “They run the sport and they do the best job they can and I drive a racecar and do the very best job I can.”

Meanwhile Stewart looked like he was in control and headed toward his third win of the season. But just as they always do, a caution changed everything.

NASCAR officials called debris in turn two but some, such as Dale Earnhardt Jr. and Stewart, didn’t think it was anything more than a bottle. No matter though, the leaders came down pit road for their final stops.

Stewart lost the battle on pit road to Kyle Busch and it ended up being the battle for the win. On the restart with eight laps to go Earnhardt Jr. took another spot from Stewart who ended up finishing third.

While pleased with what he called the best car he’s had at Richmond, he wasn’t pleased about anything else.

“When the caution is for a plastic bottle on the backstretch, it’s hard to feel good about losing that one,” said Stewart. “And we gave it away on pit road. So we did everything we could to throw it away; it got taken away from us.”

Even more frustrating for Stewart about the debris caution was that he felt “it was out of the groove. It had been sitting there for eight laps.”

Through all the chaos Stewart holds onto his two wins, Edwards remains winless, dating back to March of last season while Busch went on to score his fourth straight Richmond win, first of the 2012 season. He led twice for just 32 laps

Edwards and Stewart on the other hand had led for a combined 324 of 400 laps.

SM Staff
Previous articleControversy at Richmond — Who is at Fault?
Next articleSurprising and Not Surprising: Richmond Capital City 400