HOORAHS AND WAZZUPS: RICHMOND WAS A UNIQUE BLEND OF ENTERTAINING AND CONFUSING 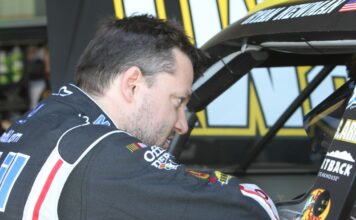 [/media-credit]We all knew that the NASCAR Sprint Cup race at the Richmond International Raceway had the potential of becoming very lively and entertaining. After all, the basic premise of this race featured the concept of 43 cars stacked up on a three quarter mile oval and, as we all know, NASCAR style short track racing can present genuine surprises within a fraction of a second.

The element of surprises from Richmond included a penalized race leader who actually wasn’t the race leader. There was another race altering issue over debris which could have been a plastic bottle, a piece of sheet metal or a beer can. There was a physical altercation on pit road over a run away tire and no fewer than six Nationwide Series cars received a NASCAR mandated nose job. Even that age old concept of beating down the Busch(es) didn’t seem to work.

Let’s first accent the positive by issuing a HOORAH to Kyle and Kurt Busch for their excellent Richmond weekend. Kyle Busch led the final 12 laps of the Capital City 400 and scored his first Sprint Cup win of the 2012 season. He also scored his fourth, consecutive, win in the Richmond spring race which broke the previous record held by Richard Petty dating back to the early 1970’s.

HOORAH to the winning driver’s M&M’s/Joe Gibbs Racing pit crew who played a big role in their team’s win. This is especially true of the flawless final pit stop that put their driver in the lead for good.

Another HOORAH goes out to this team for scoring a win at a point when they needed that level of momentum. Busch and company began the 2012 season on somewhat of a sluggish note much to every one’s surprise. The Richmond win will help get the team heading back in the right direction.

HOORAH to the ending of this Nationwide Series race. The sight of Kurt Busch and Denny Hamlin trading paint all the way to the checkers was awesome.

HOORAH to the Busch brothers for proving us wrong. Many said the concept of big brother working for little brother, combined with their volatile personalities, was never going to work. The relationship looked pretty stable at Richmond.

Okay, let’s get to the one item every NASCAR fan is debating this week. WAZZUP with that restart situation during the Richmond Sprint Cup race? This incident created a state of confusion that had more square miles than the state of Virginia.

Prior to a double file restart, around lap 319, the cars were given the one lap to green sign. Carl Edwards’ Ford came across the start line slightly ahead of race leader Tony Stewart. The electronic transponders on the cars automatically recorded this data and transferred it to the scoring tower which now showed Edwards as the leader. Spotters, representing both teams, deferred to the NASCAR official located on the spotter’s tower who allegedly confirmed that Edwards and the #99 team were the race leaders.

With the race ready to return to green flag racing, Edwards accelerated to the front of the field while Stewart’s car seemingly did not respond nearly as fast as it should have. Next came officials notice from NASCAR that said Edwards was going to be black flagged for jumping the restart and crossing the start line ahead of Stewart, the race leader.

Again, WAZZUP with the confusion that was felt inside of the race cars, on the pit boxes, in the television broadcast booths and in the living rooms of the fans? NASCAR later claimed that the Sprint Cup teams were informed that Tony Stewart was the race leader. This was confirmed on Tuesday by Robin Pemberton, NASCAR Vice President of Competition, who claimed they actually had audio indicating that Edwards was told multiple times by his own spotter that he was in second place prior to the restart. It would have helped to alleviate the confusion to have heard this information sometime Saturday night or Sunday.

Momentarily putting the confusion aside, it’s only fair to issue a HOORAH to NASCAR for showing Edwards the black flag and initiating the drive through penalty. Video replays clearly indicated that he really did jump the restart and that’s an infraction whether the scoring tower shows you in first, second or even 43d.

Despite the disappointment of a potential win turning into a tenth place finish, Edwards deserves a HOORAH for a very strong run at Richmond that could put his Roush Fenway Racing team heading in the right direction again. Frankly, this team has gotten off to a somewhat sluggish start this year well below expectations. In the first eight races of 2012, Edwards only led one lap. He led 206 laps at Richmond.

HOORAH to SPEED Channel’s Jimmy Spencer was injecting some humor in this situation. During his Tuesday appearance on “NASCAR Race Hub”, Spencer said “Carl Edwards is so fast on starts that team owner Jack Roush is thinking about entering him in the Kentucky Derby as a horse. There’s a rumor that says Jason Leffler is going to be the jockey.” This is why we all love “Mr. Excitement.”

WAZZUP with the confusion that came with a late in the race caution for debris? With 13 laps to go, Tony Stewart was in the lead and seemingly on his way to his third win of the season when the caution flag came out. The debris was at first reported to be a plastic bottle. An angry Stewart claimed that a plastic water bottle was lying outside of the racing groove and had been there for approximately eight laps. After the race, an extremely upset Stewart said “the race got taken away from us, we lost it on a plastic bottle on the back stretch.”

Under caution the majority of the field came to pit road for tires and a splash of gas. WAZZUP with Stewart’s team turning out a less than stellar pit stop? It allowed Kyle Busch to get off of pit road first and assume the race lead. WAZZUP with the pit crew having to explain that stop, to an angry team owner and driver, during the post race team meeting? WAZZUP with another in a series of sluggish restarts that also cost Stewart the race win?

HOORAH to NASCAR Vice President Robin Pemberton for again offering a plausible explanation the following Tuesday when he said: “there was an aluminum object, a beer can or something on the track in addition to a plastic bottle.”

That, in turn, leads to a HOORAH to NASCAR for making the decision to throw the yellow flag. Running over an aluminum anything can easily puncture a tire.

WAZZUP with that emotionally charged pit road altercation? On lap 311 Paul Menard pulled into his pit stall behind Jimmie Johnson’s car. A tire from Johnson’s car got away from the team and landed on the ground in the Menard pit stall. Erik Pringle, the right front tire carrier for the Menard team, tripped over the Johnson tire and fell to the ground hard. The tire he was carrying fell out of his hands and rolled out onto pit road.

The first WAZZUP goes to Pringle for running out onto pit road to retrieve the loose tire. It was an extremely unsafe thing to do at a time when pit road was so busy. Grabbing another tire located behind the pit wall would have been a far better choice.

The next WAZZUP came when an angry Pringle walked into the Johnson pit and shoved one their crew members who fell over the pit wall.

HOORAH to Slugger Labbe, Menard’s crew chief, for immediately coming over the team radio to inform his crew to settle down, this type of behavior will not be condoned and anyone who can’t settle down will be looking for a job.

HOORAH to the crew chiefs, Labbe and Chad Knaus, for getting together to view the video of the pit stops. After seeing exactly what happened, Knaus apologized to Labbe and later, after the race, found Pringle to issue a personal apology. That’s how NASCAR veterans make quick work of resolving issues.

WAZZUP with six NASCAR Nationwide Series teams being told their cars need a nose job? During an April 26th first round tech inspection for the Richmond Nationwide Series race, NASCAR officials discovered modified upper front bumper covers on three cars from Richard Childress Racing and three cars from Turner Motorsports. The modified bumper covers were confiscated by NASCAR and the teams were told to replace them.

WAZZUP with the fact that these penalties seem to be a little on the light side? In past cases, especially in the Sprint Cup Series, the penalties often included a much larger fine, usually around $100,000, along with the loss of championship driver’s and owner’s points. In some cases there has even been personnel suspensions.

HOORAH to SPEED Channel analyst Kenny Wallace for referring to all of the above as “drama for your mama.”

In some final thoughts HOORAH to Jimmie Johnson for being named as Forbes Magazine’s Most Influential American Athlete. The honor stemmed from his talent and accomplishments as a driver as well as his demeanor off the track. Another factor here was Johnson’s humanitarian efforts especially through his Jimmie Johnson Foundation. When you consider the list of athletes, from all of America’s major sports, who had major career and personal accomplishment last year, this is a huge honor for Johnson and he didn’t have to do the drop to one knee Tim Tebow move to earn it.

Finally, the in house girlfriend, aka the card carrying, T shirt wearing, member of the Junior Nation, insisted that I write: HOORAH to Dale Earnhardt Jr for his second place finish at Richmond and the fact that he’s now second in the championship standings and only five points away from first. The girlfriend also wants you all to know that Junior is going to end the winless streak this Sunday at Talladega.

That’s fair. Earnhardt had a strong run at Richmond despite having to deal with a brake problem. He clearly is carrying the flag for Hendrick Motorsports at least for the moment and, with his track record at restrictor plate races, he could actually end the winless streak at Talladega.

Having said that, WAZZUP with me having to listen to her Junior Nation lectures all the way to next Sunday?