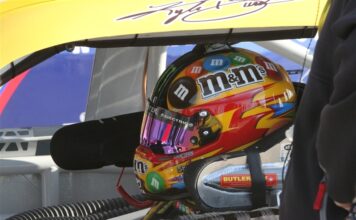 [/media-credit]Last weekend at Richmond after the controversy that surrounded the restart with Carl Edwards and Tony Stewart, followed by the debris caution for supposedly a water bottle, it was Kyle Busch who came out on top. The win marked his first win of the season and his 24th win in 266 starts.

“It was an awesome weekend all around,” Busch said after the race. “We unloaded here yesterday and had a decent car off the truck and was able to work on it and just kept making some changes to it, try to make it better for us.  And you know, there through much of the race we just kept ourselves in position and did what we needed to do to stay in the top 5 and had a good race car to do that with, and the guys on pit road gave me phenomenal stops to gaining ground every time even when we were pulling spring rubber.  Can’t say enough about those guys.”

If it wasn’t for that last caution, there was good potential that Stewart would’ve been in victory lane as he had a good sizable lead on Busch. Busch says that if the caution hadn’t come out, he would not have caught Stewart as he was losing a tenth a lap.

“At that point I kept trying and staying with him there early in that run to get him the pressure and use up his tires a little bit, and I could see him doing some of that,” he added. “But then my car just started getting a little bit too tight in the center and a little bit too loose off where I started losing ground, and once I about couldn’t see him anymore, I figured, okay, I’m going to save what I’ve got here and just try to make it to the end here and see if any of the guys catch me from behind, give me something that I have left that I can reach them with if they get to my back bunker.  No catching Stewart without that caution.”

The No. 18 team is off to a slow start this year, which is uncharacteristic for them. In the first nine races of the season, he only has two top fives and four top 10s while sitting 11th in points.

Some of their bad finishes were due to things happening out of their control, like being involved in wrecks. The one that stands out for Busch is wrecking on lap 25 at Bristol, being taken out of the race. For that reason, team owner Joe Gibbs says he wasn’t worried as he had confidence in his guys.

“I think tonight was a good example of a total team effort,” he added. “I think Dave did a great job.  Obviously our pit crew, that was awesome.  Those guys are lightning quick.  And then Kyle, I think, too, just stayed real patient, never worried about things, kept his poise, and things just turned out right for us in the end.”

Crew chief Dave Rogers knows that they got some work to do, though, as it hasn’t all been due to just plain bad luck.

“Obviously a year ago I think you look back and we were leading the most laps and contending for the win nearly every week at this point in the season,” he said. “Now we’re not living up to that standard.  That tells me we’ve got to work harder, bring better race cars to the racetrack.  I feel this race is what of an indication that we’re turning the corner.  I think Kansas was an indication.  Kyle came back after Kansas and just gave me phenomenal feedback about what we need in our mile-and-a-half program and that we’d come back to Richmond, a place we think we should run good, and we do.  I don’t think one race makes or breaks a season, but pleased we were able to run up front here, now looking forward to going to Talladega, Darlington, Charlotte and seeing what we can do at those tracks.”

Other years, Busch would’ve got frustrated and thrown a temper tantrum. However, Rogers says one of the keys to their victory was that Busch kept himself calm.

“He never got frustrated or discouraged,” Rogers said. “Kyle said the car is pretty good.  I thought we were off a little bit more than I thought it was going to be, and Kyle just did a great job giving us feedback, giving us direction on what he needed to make the car better and was patient with us and just drove a smart race.”

Seeing Busch win on a short track like Richmond is the complete opposite of the start of the year, considering he finished 32nd at Bristol and 36th at Martinsville. However, Busch has always ran well at Richmond in spring, now winning four spring races in a row. His worst finish in the spring at Richmond is fifth, which came in 2006.

“It’s just something that keeps going well for us,” he says. “It probably could have been spring in Richmond the year before that, too.  Unfortunately the last two laps I got into a little tangle with a pretty popular race car driver.  Aside from that, this race has always been great to me.  I’ve run well here in the Cup cars here for a long time and I won my first Nationwide Series race here.

“I guess being the last week of April, first week in May, birthday week, it’s always kind of fun, too.  Won here on my birthday two years ago and coming up on another birthday.  Every time I come to Richmond in the spring it’s really good, but yet I feel really bad because I’m getting older.”

With the struggles of Joe Gibbs Racing this season, a lot of people are looking at Michael Waltrip Racing as the top Toyota team as they have finished in the top 10 in most of the races this season with at least one driver, sometimes all three in one race.

“I think we have a great relationship with Michael’s group and with Michael Waltrip Racing and Rob and everybody over there, and hopefully, because we do, with our partnership, and working through Toyota, that we do share some things,” Gibbs says. “But also I think the great thing about our sport, what I love about this sport, you’ve got to earn it and you can’t fake it.  There’s nothing you can do about it.  You’re either good or you’re not good, you’re going to be up front or not up front.  I love the competitive part of it.

“I think having partners like that, it pushes you.  I think it’s great.  I applaud them, what they’ve been able to do over there, and I think they’ve stepped it up, and hopefully at some point, that’s up to us to try and keep up with them.”

Heading into Talladega, Busch looks to have another solid finish as he begins his climb up the point standings. The track hasn’t historically been Busch’s best as he only has two top 10s in 14 starts.