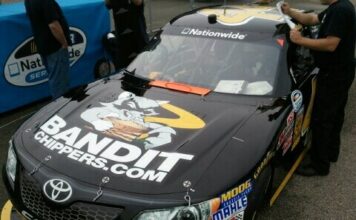 This week, NASCAR Nationwide Series Driver Mike Bliss makes his seventh career NNS start at the Talladega Superspeedway behind the wheel of the Black and Yellow #44 Bandit Chippers.com Toyota Camry from TriStar Motorsports. Live coverage of the  Aaron’s 312 on Saturday, May 5 at 3 pm ET will be on ABC.  Qualifying coverage can be seen live on ESPN2 Friday at noon ET.

·    Tayler Malsam, a TriStar teammate of Mike Bliss Malsam, 23, stands 8th as the highest ranking Toyota driver and both are in the top-ten.  TriStar is the top non-Cup affiliated team in the 2012 NNS standings after the first seven races.

Mike has run Talladega in the NNS six times before, with 1 top 5 and 2 top 10’s under his belt and he will be looking for another one this weekend in the #44 Bandit Chippers.com Toyota Camry.

Mike Bliss will be joining the TriStar Team Drivers and Sponsor of the #19 G-OIL Camry Green Earth Technologies at the SPEED Channel dome on Friday to support the Alabama Institute for Deaf and Blind (AIDB) relationship and event.  Bliss will be brandishing his Bandit Industries and G-OIL gear as he takes the stage for a Team interview live on MRN with Steve Post at around 7pm ET.  The #44 Bandit Chippers.com has G-OIL under the hood powering it every week along with our other NNS TEAM entries.

“I like the super speedways and we ran strong earlier this year in Daytona. We are bringing that car back that we led 6 laps with there to Talladega and I feel like that #44 Bandit Chippers.com Toyota has as good as chance as any to run and stay up front.  We had a pretty good run with Bandit last week in Richmond, but just couldn’t get the track position we needed before the tires wore out.  Our #44 Team was the Top Qualifying Toyota in Daytona in February, so hopefully we can unload off the truck in Talladega with another fast piece.  We hope the car can work well in the draft, find the right partner again, then Chip & Grind our way to the front with Bandit on board.”

“We were very aggressive at Daytona to open the year and we plan on attacking it in Talladega just like we did there.  We got the #44 Bandit Chippers.com SuperSpeedway car set up and ready for that draft on Saturday.  The entire #44 Team and crew are very thankful for the continued support from Bandit Industries and we will give it out best for Bandit.”

“It doesn’t get much better or BIGGER than Talladega in my book.  We have some very important relationships in that market and the racing is out of this world.  We came on at Vegas with TriStar and the #44 Team and we have has been pleased with our choice to back Bliss in the NNS.  They showed they can make a run for the lead on these types of tracks and compete with anyone, but we all know it’s all about avoiding the BIG one and hopefully Mike will have a little Bandit luck on his side come Saturday.”