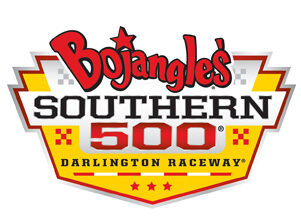 [/media-credit]Tonight we head to NASCAR’s oldest superspeedway. The track “Too Tough to Tame” is the spot for the 63rd running of Bojangles’ Southern 500 tonight on FOX, (live 7 p.m. ET) and when the engines fire tonight, it will be the last time the 43-cars making the start tonight have four straight fenders. The cars that exit the racetrack this weekend will surely go to the same scrap pile as the cars raced at Bristol and Martinsville. With the aging track surface and 43 drivers itching to claim hardware from The Lady in Black, the fenders will connect tonight when the green flag files.

Darlington Raceway dates all the way back to 1950 as NASCAR’s first asphalt oval that measured over a 1/2-mile in length. The track’s first NASCAR race was held on Labor Day in 1950, won by Californian Johnny Mantz in a six-cylinder Plymouth, amongst a field of 75 cars! Much like this month’s Indianapolis 500, the first Southern 500 staged a 2-week qualifying scheme to whittle down the field of more than 80 entrants and align the 75 car field into 25 rows of three cars. When the dust settled, it was Mantz, driving a car owned by Bill France Sr., that would claim the $25,000 purse, a reward that was 7-times the average wage in 1950.

I had the honor of watching last week’s Aaron’s 499 with a very close family friend whom happens to be a Brad Keselowski fan (or maybe he’s just a fan of the Blue Deuce, or Miller Lite, or maybe just beer in general), and I have to give him credit for my win last week in Alabama. I happened to be writing my column last Saturday afternoon when Uncle Scotty walked through my front door, and I admit to asking his advice with my picks last week. “Pick Bad Brad” he said, “Remember when we were at Talladega and he put (Carl) Edwards in the fence for his first win. The kid can race in Alabama.”

Thanks Uncle Scotty for the pick as Brad Keselowski ran as flawless of a race last week by Talladega standards as ‘flawless’ comes. Keselowski put himself in second coming out of the final turn at the 2.66-mile superspeedway, a position which conventional wisdom says the driver in the second spot on the final lap of a restrictor-plate race has a much better chance of winning than the leader.

“I had this whole plan if I ever got in that situation where I was leading,” Keselowski said. “I thought about it and thought about it — dreamed about what to do — and sure enough, going into (Turn) 3, it was just me and (Kyle) Busch. And I knew the move I wanted to pull.”

“. . . I went into Turn 3 high and pulled down off of Kyle and broke the tandem up. That allowed me to drive untouched to the checkered flag. It wasn’t easy to convince myself to do that, but it was the right move. I’m glad it worked.”

My Dark Horse pick, Joey Logano got caught up in a wreck with 10-laps to go and finished 26th. I guess sometimes you just have to take the hi’s with the low’s.

As much as I hate to jump on the Biffle bandwagon, I believe it is in my best interest to make an educated pick this week and go with the Roush-Fenway racing driver. He’s starting from the pole at a track where passing is extremely difficult to complete and the eventual race-winner has come from the pole position 19-times, you’ve got to go with a driver starting towards the front tonight.

Biffle enters the weekend as the NASCAR Sprint Cup Series’ points leader, and took the pole by breaking the tie between Jimmie Johnson and Kasey Kahne for the top spot late in qualifying Friday evening. He was second fastest in both NASCAR Sprint Cup Series’ practice sessions yesterday at the track Too Tough To Tame. The last time Biffle started from the pole at Darlington was back in 2008, and the top spot was not too kind to the Washington native, as he blew an engine and finished just 234 of the scheduled 367 laps at The Lady in Black, finishing dead last in 43rd. I’m hoping Lady Luck is on my side tonight and Biffle becomes the 20th winner from the pole at Darlington Raceway.

I’m not sure you can qualify the guy sitting 6th in NASCAR Sprint Cup Series points a Dark Horse, but a Dark Horse isn’t always a driver that is way outside the realm of possibility of winning. This week it’s a guy that tends to fly under the radar of most NASCAR writers and fans. Martin Truex Jr. has been leading the charge of Michael Waltrip Racing drivers to boost the Toyota team to the upper echelon of race teams. Last week’s 28th-place finish marked Truex’s worst finish of the season, and he is looking for a quick rebound this week at a track where he has finished no-better than 6th in his six tries to tame The Lady in Black.

6th in the first practice Friday afternoon, Truex slipped back to 12th on the leader board during Happy Hour, and rebounded to claim a starting spot for his NAPA Auto Parts Toyota in the third-row tonight in South Carolina. He’s had a great season so far, and a win tonight at Darlington would make a statement that Michael Waltrip Racing is a force to be reckoned with in the NASCAR Sprint Cup Series.

That’s all for now, so until the All-Stars come out in Charlotte…You Stay Classy NASCAR NATION!!

PS: Happy Mother’s Day to all the NASCAR Moms this weekend!