Through the Years, Bernece Wood Has Kept Her Famous Racing Family Close 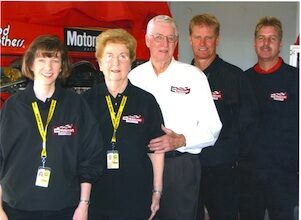 Bernece Wood grew up the daughter of a country storekeeper from Charity, Va., married a sawmiller from Buffalo Ridge, and wound up the matriarch of one of NASCAR’s cornerstone race teams.

Mrs. Wood is one of only three people on the Wood Brothers team roster who has been there from the beginning in 1950. The others are her husband, NASCAR Hall of Fame member Glen Wood, and his brother, the team’s long-time crew chief Leonard Wood.

Mrs. Wood has seen the team grow from a fledgling outfit run by her husband and his brothers, Leonard, Delano, Ray Lee and the late Clay Wood,  to one managed by her sons Len, Eddie, and daughter Kim Wood Hall.

Through it all, even with all the demands that come with racing in NASCAR’s elite division, the Woods have remained a close-knit bunch, and much of the credit for that goes to the matriarch.

That’s never more evident than at dinnertime in Stuart. For decades, when the Woods raced out of a shop in Stuart, Bernece’s husband and children ate the noon meal at her table. The team, now based in Charlotte, is running a limited schedule again, and the family dinners are fairly regular again. In the summertime, there are peas, potatoes, beans, corn and tomatoes grown in Glen’s garden just down the same road where Bernece Wood and her children live door-to-door.

It’s like a scene from a Norman Rockwell painting, but it’s an everyday occurrence for the Woods.

“We never knew any other way,” daughter Kim Hall said. “That’s how it’s always been.”

“Whenever you had news or something to tell, you told it when everybody was together,” she said, adding that no one dared be late or they might miss something important.

There are other reasons to be punctual.

It’s not just the noon meal that Bernece Wood and her family, including daughters in law, a son-in-law and grandchildren, eat together. Sometimes it’s breakfast around the big table at the Coffee Break restaurant in Stuart; other times it’s a cookout on Eddie’s patio.

“Still to this day we eat most of our meals together,” Hall said.

When Bernece Wood isn’t actually with her family, she’s usually talking about them to visitors at the Wood Brothers Museum in Stuart.

“She loves nothing more than to be at that museum talking about her family.”

Mrs. Wood also loves to share with visitors her knowledge of the team’s 62 years in racing. She can identify the faces in decades-old photos, and she’s pretty savvy about the cars too.

One of Bernece Wood’s favorite subjects of late is her team’s victory in the 2011 Daytona 500. She proudly wears her ring from that victory, alternating with Glen’s NASCAR Hall of Fame ring.

It was a special win for Mrs. Wood for many reasons, including the fact that the race team run by her children bounced back from several disappointing seasons to score a major victory.  It was one that came the old-fashioned way, not because of gas mileage or some other fluke.

“She stayed behind at the hauler and greeted everybody that came by there,” Hall said.

That wasn’t a surprise to those who know Bernece Wood.

Whether it’s at her dinner table or behind the counter at the museum in Stuart or at the hauler in Daytona after her team won the Daytona 500, Bernece Wood has stood rock solid behind her family and their race team.

The Wood Brothers race team, as well as the entire NASCAR industry, has persevered for decades, and the ladies behind the scenes deserve much of the credit.

The Sprint Cup cars will be idle this Sunday for Mother’s Day, as they have been for years and likely always will be.

If there was ever a sport or an industry that owed a debt to the mothers behind the scenes, it’s NASCAR.

Happy Mother’s Day to Bernece Wood and all the other racing moms out there.