The Future of NASCAR – Spotlight on Jeremy Clements 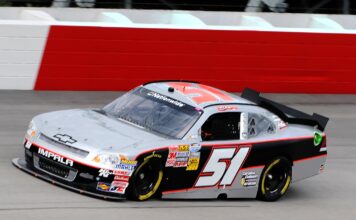 Jeremy Clements is following a racing family tradition and is determined to add his name to the legacy.

His grandfather was the acclaimed NASCAR owner and crew chief Crawford Clements and was a big influence.

“My racing background goes all the way back to my grandfather Crawford Clements.  He was a crew chief for Rex White and Buck Baker in the 1960s and they won a championship. So he’s the one who got all this started.”

He got his first go-kart when he was seven and won 47 feature events before moving on to dirt track racing. He began racing four cylinders on dirt in 1999. During the next three years he won over 50 feature events and two track championships.

In 2002, he progressed to the Late Model division winning nine races and the championship at Cherokee Speedway.  He also made his first ARCA Series start at Talladega Superspeedway.

In 2003, he competed in late models and made five ARCA Series starts capturing three top-ten finishes.  He also became one of the youngest drivers to ever qualify for a NASCAR Nationwide Series race.

He continued racing in the ARCA Series and the Late Model division in 2004 but his career came to a screeching halt. On July 24th while racing at 311 Speedway in North Carolina he was seriously injured. The drive shaft on his late model car broke and came through the car injuring his right hand.

The doctors told him it looked like a bomb had exploded in his hand.

“It just about took my hand off,” he said. “I had to have 10 surgeries and they sewed my hand to my hip for about a month. They did a skin graft, a bone graft and they took tendons from my foot to make it all work again.”

His doctors told him he would never race again.  He was devastated.

“That’s all I’ve ever done with my life and all I hope to do. It scared me to think I might not be able to race again.”

What he didn’t find out until later is that his doctors had initially considered cutting off his hand.

It took him a year to recover but he was determined to prove the doctors wrong. A year later, he was back doing what he was meant to do.

In 2008 and 2009 he worked with Joe Gibbs Racing practicing and qualifying for Kyle Busch or Joey Logano when they were not available due to scheduling conflicts. There was a possibility of starting a third team for him but unfortunately he was not able to find the sponsorship money to advance his career with the organization.

He now drives for Jeremy Clements Racing. It’s a family business owned by his father Tony and his Uncle Glenn. It’s a daily struggle to compete with the well funded teams and their bevy of sponsors but Clements has never backed down from a challenge.

The team operates on a race to race basis. The money is usually just enough to keep them going but not enough to provide him with the competitive edge that a corporate sponsor could provide.

Here’s an example of the issues they face each race weekend. For the race in Darlington they were allowed to have six sets of tires but they came to the track with only two. They used one set for practice. The second set was used for qualifying and to start the race.

They get their remaining tires from the Cup teams who give them the tires after they have used them for practice.

They also use a different engine from most teams.  The newer engines have more horsepower, torque and are about 30 pounds lighter.

“It’s difficult,” he says. “But if you’re not here, you’re going to be forgotten. We’ve got a good team. We just need sponsors to help with these kinds of obstacles.”

But don’t think he’s not grateful.

“I appreciate the opportunity to do this. I just want to be able to keep going.”

Look for Clements in his No. 51 Chevrolet on Memorial Day Weekend as NASCAR begins their campaign, ‘NASCAR Unites – An American Salute,’   to support the U.S. military and their families.

Jeremy Clements Racing gave fans the opportunity to honor loved ones, friends or themselves during the race. These names will be displayed on the deck lid of his car for the May 26th Charlotte race. A portion of the proceeds will be donated to the Marine Corps Air Station Cherry Point base.

They are also proud to have Rick Harrison of ‘Pawn Star’ fame as their primary hood sponsor for the race. Harrison will serve as Grand Marshall for the Nationwide History 300 at Charlotte Motor Speedway.

Angela Campbell
A native of Charlotte, NC, Angela (Angie) was first introduced to racing by her father. An avid fan of NASCAR, she found a way to combine her love of racing with her passion for writing. Angie is also an award-winning member of the National Motorsports Press Association. Follow her on Twitter @angiecampbell_ for the latest NASCAR news and feature stories.
Previous articleKurt Busch Fined and Placed On Probation
Next articleRed Cross Honors Its All Star Blood Donors with Special Patriotic Paint Scheme