The All-Star Race, What a Mess 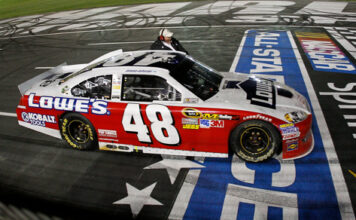 [/media-credit]Why it is that NASCAR feels it has to tweak the All-Star race. Consider this.  The All-Star Game, the mid-summer classic plays nine innings and all rules apply. The NBA All-Star event follows the rules and the NFL late season All-Star game still plays four quarters and follows the rules. Yet, NASCAR, who lusts after those stick and ball sports thinks they have to mess with the format. What they did on Saturday night was really screw up the formula. They once again made it so that those smarter than you and me could manipulate the race. Sure, strategy is part of sports, but this went to the extreme.

First they gave a real advantage to the winner of the pit crew competition held earlier in the week. The winner of that “competition” got their choice of pit stalls. Back in the day, the pit crew competition was held at North Carolina Speedway, now Rockingham Speedway, on a real race track with the driver of the car in the driver’s seat. Nowadays, it’s in some area in Uptown Charlotte with any number of people behind the wheel. No longer do drivers drive off after service. The cars are pushed to the so-called finish line with girlfriends and notables, in some case, behind the wheel. Strike One.

Then, someone decided that a reward would be given to each driver who won four of the five segments of the race. Each would be allowed to pit first through fourth on the final segment. In past races, the field was inverted, but not this time. The rich get richer. Jimmie Johnson first and followed by Matt Kenseth and Brad Keselowski moved to the back and stroked around because they knew that in the end, they would have an advantage.

Only Dale Earnhardt, Jr. didn’t have the luxury, winning the fourth segment. Truth is that it robbed the fans on TV and at the track of seeing the five-time champ, the current Daytona 500 champ, and a rising star, were robbed of seeing these stars race.

Sure, it was the correct strategy, given the rules that must have been formulated by someone who didn’t understand what would happen. As it turned out, the format ruined the racing. Sure, it’s just an All-Star race, but to fans, it looked like a fix. I’m sure if they had run 90 laps, Jimmie Johnson would have won, but all the format changes just added to the misery.

The racing was good back in the pack, but the real fast cars, somewhat like baseball’s Prince Fielder or Albert Pujols sitting out the middle innings, were sitting in the back waiting for the final ten laps or the ninth inning in baseball terms. It was just a little joke on those that raced in that last segment. The real power was at the back of the field, waiting for the end.

Crazy! Do baseball, football, and basketball players take steroids to beef up for the All-Star game? And yet we see trick engines and apparently no rules.

Fans love the All-Star race, but those making decisions need to look at what we are doing—racing—and let it be straight up. Saw a tweet from Steven Wallace. He said the race was perfect. No wrecks and no passing. That’s an exaggeration, but true in some ways.

My response was that our drivers have become too good to make mistakes or that they are too good to settle because some are just too good. Either way, that’s sad.

The “Pass In the Grass” and the close competition at the end of these races is only a memory. It’s all about finding a loophole in the rules and exploiting it, as usual. But this time, NASCAR, or whoever changed the format, made it easy. I guess I’m in the minority.

Ron Fleshmanhttp://www.ris-news.com
Ron Fleshman has followed NASCAR racing since attending his first race at Martinsville Speedway in 1964. He joined the Motor Sports Forum on the CompuServe network in the 1980s and became a reporter for Racing Information Systems in 1994. In 2002, he was named NASCAR Editor for RIS when it appeared on the World Wide Web as www.motorsportsforum.com. He can now be found at www.ris-news.com. Ron is a member of the American Auto Racing Writers and Broadcasters Association. You can find Ron following and reporting on the top three NASCAR divisions each week. As a lifer in his support of racing, he attends and reports on nearly 30 events a year and as a member of the motor sports media, his passion has been racing for 47 years. He lives with his family in rural West Virginia and works in the insurance industry when not on the road to another track.
Previous article
CHEVY NSCS AT CHARLOTTE ALL STAR — Jimmie Johnson Wins – Press Conf Transcript
Next article
It’s Time For Change, Kurt Busch