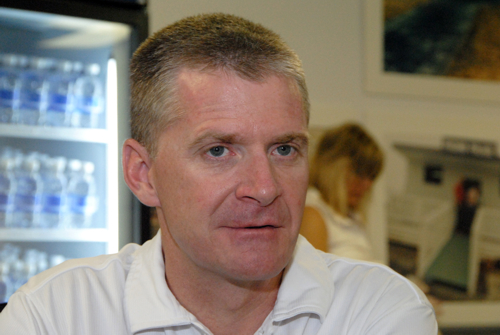 [/media-credit]After a great run at Dover International Speedway went bad due to engine problems, it is no wonder that Jeff Burton, driver of the No. 31 Armed Forces Foundation Chevrolet, might be just a bit philosophical.

But, according to Burton, every lesson is a life lesson when it comes to NASCAR racing.

Burton’s first lesson is that persistence and never giving up is critical to success both on and off the track. And he most certainly feels that his team is starting to turn it around because of their persistence and willingness to work together.

“The better you run, the better your luck gets,” Burton continued. “When you teeter on not running well, little things are big things.”

“Fortunately the last couple weeks, we did have fast cars,” Burton said. “So, that’s what really feels good to me. We’re making gains on the types of tracks we’ve been struggling on.”

Burton also credits learning lessons together with crew chief Drew Blickensderfer, who came over toward the end of last season from Roush Fenway Racing.

“I feel like we’re starting to learn each other,” Burton said. “Whenever you bring somebody new in like Drew, there’s a period of time it takes to get acclimated.”

“Long-term, we felt like that was the right thing to do and given some time, as we’ve had to grow together and him get accustomed to what I’m feeling  and what I like to feel, we’re starting to get better and run well.”

Burton said that he has always been optimistic and, even after last weekend’s heartbreak at the Monster Mile, reiterated that he is one that never gives up. One of the prime motivators for the veteran driver is that he fully intends to grab that championship ring before his run is over.

“I’ve always been like that,” Burton said of his tenacity. “I’m not here just to be here.”

“I’m here for a reason,” Burton continued. “I want to win a championship before I get done.”

“That drives me,” Burton said. “I’ve never been a guy that believes that people are out to get more or that there’s some sort of conspiracy for me not to run well. I believe it’s in our hands.”

“I haven’t forgotten how to drive a race car,” Burton continued. “I drive for a really good company.”

“I believe that if we do keep fighting and swinging, we’ll get back to where we want to be.”

But before Burton can score the championship, he has to get into the Chase hunt. And he still feels there is that chance, in spite of the troubles they have had so far this season.

“Unfortunately three of the races where we had engine trouble, we were running the best that we have run,” Burton said. “That’s really hurt us in the points. But barring that, we’d be sitting there twelfth in points with a team that’s improving.”

“So, there’s still a chance for us to make the Chase, although the days are dwindling,” Burton continued. “We’ve got to get it together and start having good finishes.”

“We’re in the growth process,” Burton said. “We’re taking a team that was 20th in points last year and trying to put it in championship contending form.”

“It takes a little time to do that.”

Along with the rest of his competitors, Burton will be tackling the ‘Tricky Triangle’ this race weekend. Burton feels already that the lesson learned for the newly-repaved Pocono Raceway is all about track position.

“I think, as with any newly paved race track, that track position will be important,” Burton said. “I don’t think we’re going to see multiple grooves this week.”

“Having said that, we really weren’t seeing multiple grooves the other way because it had gotten so slick and it was hard to make things happen,” Burton continued. “The track is definitely an improvement.”

“The first couple of races you’re probably not going to see a second groove develop,” Burton said. “But long-term, the race is going to be better here.”

Burton is also pleased about the shortening of the race at Pocono. In fact, he would like to see some of the other races on the circuit trimmed back a bit as well.

“I’m a proponent of shorter races,” Burton said. “I think it’s the right thing to do.”

“I’m not advocating a shorter for every race thing,” Burton said. “I just think on average our races should be just a little bit shorter.”

Burton’s biggest concern about the sport, however, is the number of people coming, or not coming, to the races. And as the unofficial ‘mayor’ of the garage area, Burton thinks this is a critical lesson that NASCAR must tackle.

“The concern I have is the number of people coming to the races,” Burton said. “I think our competition level is really good. Honestly, from a competition standpoint I’m not sure how we could do a whole lot better.”

“The economy is a tough thing,” Burton continued. “And when the economy is bad, we’re not going to have the viewership.”

“We just have to get through this,” Burton said. “I think we’re several years away from being back to whatever ‘normal’ is.”

“There’s a snowball effect to the bad economy that runs through our sport for a long time,” Burton continued. “But all in all, in a down economy, we’re pretty healthy.”

In spite of the struggles and challenges of the sport, Burton credits NASCAR and racing for teaching him most, if not all, of his life lessons.

“To me, persistence is a core value,” Burton continued. “These are simple things.”

“When you complicate things, it makes life harder,” Burton said. “When you treat people the way you want to be treated, it may not always be the easiest thing to do but sometimes the right thing is not the easiest.”

Burton shared that his biggest life lesson from the track, however, is to follow you dream and your passion, as well as sinking all you have into that dream.

“Pick something you love and give everything you’ve got to it,” Burton said. “And you may or not be successful.”

“But at the end of the day and if you’ve done it the right way, then you can sleep at night,” Burton continued. “If you’ve given a half effort and you know it, then you’ll never sleep well.”

“You have to give it all,” Burton said. “You have to choose the way you’re going to conduct your life and not waver from that.”