Surprising and Not Surprising: Pocono 400 Presented by #NASCAR 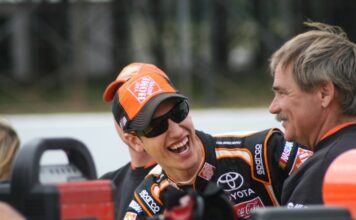 [/media-credit]With a shortened race, a repaved track, a snazzy new Twitter partnership, and Doc Mattioli looking down from heaven, here is what was surprising and not surprising from the Pocono 400 presented by #NASCAR.

Surprising:  As the checkered flag flew at Pocono Raceway, it was surprising the history that was made by race winner and driver of the No. 20 Home Depot Chevrolet. Joey Logano became the youngest Pocono winner ever at 22 years and 17 days, breaking the record set by Jeff Gordon, who won at 24 years of age.

Logano also was the first pole winner in 31 races to go on to Victory Lane. The young driver led 49 laps, a career high, and will now race in the 2013 All-Star race.

“Yeah, the moment is pretty surreal,” Logano said. “Not just crossing the line, obviously that’s an amazing moment, and I didn’t stop screaming until I got to about – well, victory lane, I guess.”

“You work so hard to do this,” Logano continued. “To get a victory, it meant so much.”

“Pulling the Home Depot car into victory lane at a Sprint Cup race and winning it the right way was just an amazing, amazing feeling that you can’t replicate and you can’t explain what it means.”

Not Surprising:  It was not surprising that the second place finisher was gracious as always, even in defeat. Veteran driver Mark Martin, behind the wheel of the No. 55 Aaron’s Dream Machine Toyota, came out on the wrong end of a bump and run to the young driver that he has been touting for many years.

“I’m just so thankful to have the opportunity that Michael Waltrip, first of all, and Aaron’s and Toyota have given me to drive competitive race cars,” Martin said. “It is so incredible to be in something that is strong enough that I can contend.”

Surprising:  It was surprising how focused and disciplined Dale Earnhardt, Jr. and crew chief Steve Letarte were at Pocono, pitting to take fuel and still finishing with a top-10.

“Well, we just didn’t want to run out of gas,” Dale Junior said. “I didn’t know the caution flags were going to be so long. And they were long enough to help them guys make it on fuel.”

“We’re not taking those kinds of chances – just yet.”

Not Surprising:  On a newly-paved race track, it was not surprising that passing was challenging and restarts were even more insane. Both drivers of the Stewart Haas team could most certainly attest to that.

“The restarts were insane,” Tony Stewart, driver of the No. 14 Modbil1/Office Depot Chevrolet and third place finisher, said. “But you had to take full advantage of them.”

“That was the biggest opportunity to make gains and definitely big gains,” Smoke continued. “You could get three or four at a time if somebody got bottled up a little bit.”

“You had to be on your toes for the restarts for sure.”

Teammate Ryan Newman, behind the wheel of the No. 39 Haas Automation Chevrolet, also had a tough time on restarts. With just 40 to go, Newman fell from sixth to 11th place due to a crazy restart, finishing the race in 12th.

“I told the guys that I just got too aggressive on that restart,” Newman said. “It ended up costing us some spots there.”

“At the end of the race, we just didn’t have the track position that we needed and we didn’t get the top-10 finish that we felt we deserved.”

Surprising:  Team Dodge had a surprisingly tough day at the race track. Brad Keselowski wheeled his No. 2 Miller Lite Dodge to an 18th place finish, while AJ Allmendinger took one of the most brutal hits of his racing career in his No. 22 Shell/Pennzoil Dodge.

“My team did a great job through all the adversity today,” Keselowski said. “We got caught twice on the timing lines and then we had some problems with the ignition.”

“And at the very end, we lost brakes,” Keselowski continued. “It was just one fight after another.”

“I’m not sure what happened,” Allmendinger said of his crash.”That was pretty hard, that might be one of the hardest hits I’ve had.”

Not Surprising:   With over 22 speeding penalties meted out by NASCAR during the race, it will not be surprising to see crew chiefs galore on pit road at Michigan for the upcoming race weekend. One of the multiple speeding offenders was none other than five-time champ Jimmie Johnson.

“Things were just repaved, everything has been redone and we need to physically walk down and mark it off ourselves to understand what happened there,” Johnson said. “We got nailed with a lot of other guys.”

Surprising:  After a fitful start to the season, Jamie McMurray had a surprisingly good finish at Long Pond. The driver of the No. 1 Banana Boat Chevrolet finally pulled off a top-10 finish.

“We had a really good Banana Boat Chevy today,” McMurray said. “I am proud of the effort from everyone one this team and feel good about the way we performed.”

Not Surprising:  The monkey remained on the back of the driver of the No. 24 Dupont Chevrolet. In spite of running as well as top-five, Jeff Gordon and his team made the decision to pit for fuel with just 23 laps to go.

That decision bit Gordon yet again, relegating him to a 19th place finish. The four-time champ has just 4 top-10 finishes in the last 17 races.

And with the finish at Pocono, Gordon fell to 22nd in the point standings, with only wild card wins as his hope to get into the 2012 Chase.

Surprising:  Kyle Busch and team No. 18 for Joe Gibbs Racing surprisingly suffered the second engine failure in a row at Pocono, finishing 30th.

“It’s very frustrating,” Busch said. “We got knocked back on the first lap in traffic by a stupid move and we’re fighting our way back through and then we have another engine issue.”

“We’re putting ourselves in a hell of a hole and it’s not going to be easy to come out of it.”

Not Surprising:  With Greg Biffle’s valve train failure and 24th place finish, it was not surprising that a new points leader emerged after the checkered flag was waved at Pocono.

Teammate Matt Kenseth, with his solid seventh place finish, took over the lead, ten points ahead of Dale Earnhardt. Jr., with Biffle falling to 16 points behind to third in the standings.

“It’s unfortunate we fell back that far, but the points are so tight we knew that if we had an issue we were going to drop a lot,” Biffle said. “You’re vulnerable when you’re only one point or ten points ahead, but that’s racing.”

“It’s better than being second,” Kenseth said of his points lead, “But I’m just kind of disappointed right now because I thought we had a shot to win.”

“I couldn’t go on restarts,” Kenseth said. “We’ll keep working on it, but I’m happy we got a decent finish and took over the point lead.”