Congrats to Boywer, But There Were Better Races 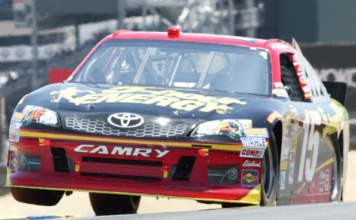 [/media-credit]I almost hate to write what I am about to put on this site. It’s blasphemy in many ways, but I don’t think I am the only one who feels this way. Saturday was a great racing day. We saw what I consider great racing. After the Nationwide Series race at Road America where the story lines were so great and the racing was so great, I moved over to NBC when it finally quit raining, to watch a real IndyCar race. I’ll be the first to admit that I don’t watch that series much, but there was nothing else to do, so I watched. I learned a lot.

Like the Nationwide Series race, the race at Kansas was good. There was lots of action and though they didn’t have fenders.  These drivers wanted to win and when that happens, you get some dust-ups. In that series that’s a dangerous proposition, but it didn’t seem to matter. Points be damned, they were going for the win or the good finish. Then Sunday came and we saw a completely different philosophy.

I’ll just say that the Chase has always been one of those ideas that I not only don’t agree with it, but one that goes against everything I believe about racing.  It’s a system that tries to emulate stick and ball sports and that is foreign to me. That said, so much was said about certain drivers “who just wanted to finish in the Top-15 or Top-20” in this race.  It was if they were trying to avoid the bad finish.  The only problem was that these were the stars—point leader Matt Kenseth and others.  How fun is that? No such talk at Road America and Kansas.

The Road America Nationwide race was wide open on the four-mile course and the racing was good. The race at Kansas was “Little Bristol,” with drivers going for it.  As strange as it may seem, the open wheel circuit might have another fan. Forgive me.

What we saw was three drivers who weren’t at the top of the standings going for it at Sonoma. Clint Bowyer was on point all day, Kurt Busch was driving for pride, and Martin Truex, Jr. just wanted to win a race. In the meantime, Jimmie Johnson, Kenseth, Biffle, and others just wanted to get out of there with little damage. The almighty points got in the way.

Bravo, Clint Bowyer!  No one deserves success as much as he does.  He’s a great driver and goes for it in every race.  I love it.  So much pressure is on these drivers to make the Chase that those in contention are so timid in the races leading up to the final ten that we don’t see the kind of action we should see.

The mantra seems to be, “Let’s get through this and hopefully we’ll still hold our points position.”  For a guy like Kenseth, who doesn’t have sponsorship for the full season (how in the name of all that’s holy can some backmarkers get full sponsorship and a former champ has to struggle to make every race financially?) it’s called survival.  No wonder he’s supposedly looking at Joe Gibbs Racing and Penske for a ride next season. You have to do what you have to do.

It doesn’t mean I have to like it, though. In today’s Cup race, I saw so much give and take that it made me sick. I’ll be the first to admit that I hate road racing. These cars are not suited for a road course and for some reason we continue to run there.

Regardless it’s going to always be a part of the schedule. It just seems that all the racing is controlled by the almighty points system and the sponsor’s pressure to make the Chase.  It’s a flawed system, but what we have.  Maybe someone will wake up in the future.

Ron Fleshmanhttp://www.ris-news.com
Ron Fleshman has followed NASCAR racing since attending his first race at Martinsville Speedway in 1964. He joined the Motor Sports Forum on the CompuServe network in the 1980s and became a reporter for Racing Information Systems in 1994. In 2002, he was named NASCAR Editor for RIS when it appeared on the World Wide Web as www.motorsportsforum.com. He can now be found at www.ris-news.com. Ron is a member of the American Auto Racing Writers and Broadcasters Association. You can find Ron following and reporting on the top three NASCAR divisions each week. As a lifer in his support of racing, he attends and reports on nearly 30 events a year and as a member of the motor sports media, his passion has been racing for 47 years. He lives with his family in rural West Virginia and works in the insurance industry when not on the road to another track.
Previous article
Miguel Paludo No. 32 NCWTS Advance: Kentucky I
Next article
Is it time for a NASCAR TV revolution?