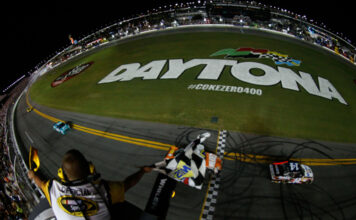 NASCAR announced 90 minutes before the start of the Coke Zero 400 on Saturday that driver AJ Allmendinger would be temporarily suspended from competition after failing a drug test taken at Kentucky Speedway last weekend. The Penske Racing organization scrambled to find a replacement driver; the team flew in Penske’s Nationwide driver Sam Hornish Jr. from Charlotte, NC to Florida to fill the ride. Hornish arrived with police escort in Daytona just in time for pre-race ceremonies to begin.

“You know it’s a disappointment at this particular time, but we’re going to wait and see what the second test results are before we make any comment or decisions. I don’t think it’s fair to him,” team owner Roger Penske said Sunday before the IndyCar race in Toronto. Penske was vacationing in Europe and was traveling to Toronto when the news was released. [/media-credit]The fate of Allmendinger rests with the results from his “B” drug test sample. He has 72 hours from the time he was notified of testing positive on Saturday to request his “B” sample be tested. If the sample comes back positive, Allmendinger will be subject to being suspended from NASCAR indefinitely.

Allmendinger’s will remain suspended for the upcoming Cup race at New Hampshire and Hornish will continue to pilot the No. 22 Pennzoil Dodge until the results of the “B” sample are released.

Penske Racing hired the former Red Bull driver in late December after the team parted ways with Kurt Busch at the end of the 2011 season. Allmendinger was 23rd in the Sprint Cup Series standings heading into Daytona, where he won the Rolex 24 Hours of Daytona sports car race in January.

Allmendinger is the most well-known driver suspended from NASCAR for a failed drug test since Jeremy Mayfield in 2009. Mayfield has fought NASCAR over the test for many years and has not raced a NASCAR event since. If Allmendinger’s “B” test does come back positive, he may have the opportunity to go through NASCAR’s drug rehabilitation program and return to competition in the future.

Matt Kenseth won the pole for the Coke Zero 400 and with the help of Roush Fenway Racing teammate, Greg Biffle, led the first 41 laps of the race. The No. 17 was trying to accomplish something that no driver has done since 1982 – win both Sprint Cup races at Daytona in the same year.

The duo was a force to be reckoned with all throughout the race, despite Biffle being penalized and sent to the rear of the field for making a pit stop while pit road was closed under caution. The RFR teammates were able to reconnect and rebound to take over the lead once again.

With half a lap remaining in the Coke Zero 400, Kenseth remained in the lead with Biffle following closely. The No. 17 Ford was passed by Tony Stewart after Kenseth slowed down to reconnect with his teammate on the back straightaway. The No. 16 was involved in a multi-car wreck that unfolded coming to the checkered flag, resulting in a disappointing 21st place finish for Biffle. Kenseth finished in third position, with Jeff Burton passing him for second on the final lap.

“I guess you need to be happy when you finish that good, but also when you have restrictor plate cars that fast, that doesn’t happen very often and sure want to figure out how to win with so the last two I feel like you always second-guess your moves, but I feel like we had one of the fastest cars all three races this year really”, Kenseth said in the media center after the race.

“Happy to get third but on the other hand, I am incredibly disappointed. My team kind of deserved to be down there holding the hardware and I kind of let them down. But overall, we had a really fast car, we had a pretty good race, made our way back to the front after the pit road thing and were in contention, just didn’t get it done that last lap.”

Kenseth remains the point’s leader with 25 points over Dale Earnhardt Jr., who finished 15th after being involved in the crash on the final lap. Biffle was able to gain one position in standings, moving him to third position. [/media-credit]Tony Stewart scored his 18th overall victory at DIS, second-most all-time to Dale Earnhardt. This is the No. 14 team’s third win of the season and has propelled him in Cup standings. The Stewart Haas driver and team owner gained four position’s in points with his win Saturday night and is now in 5th position, 84 points out of the lead. The three-time series champion looks to be on another championship run heading into New Hampshire, a track where he has three previous wins.

Clint Bowyer has fallen three positions to 10th place in standings after a 29th place finish in the Coke Zero 400. After riding in the back of the pack for most of the night, Bowyer looked to be heading to the front in the final laps of the race. His potentially good night came to a halt with eight laps to go after being involved in a multi-car accident, ending his night. The No. 15 5-Hour Energy Toyota is now 104 points behind the leader, just three points behind 9th place of Brad Keselowski.

The Michael Waltrip racing team has high hopes heading to Loudon, where Bowyer has won twice; including his first Cup series victory in 2007, where he started on the pole and led 222 of 300 laps.

The Wild Card battle – the two positions in the Chase given to the two drivers with the most victories ranked 11th to 20th in points – is heating up between some of the sport’s most popular contenders. The battle is as close as it’s ever been after top-five runs by Joey Logano and Ryan Newman at Daytona. A seventh-place finish for Kasey Kahne has increased the intensity of the wild-card hunt; with only eight races remaining until the Chase, anything can happen!

SM Staff
Previous articleNOTES FROM THE NASCAR NATION: SADLY, IT’S AGAIN TIME TO PRAISE NASCAR FOR THEIR SUBSTANCE ABUSE POLICY
Next articleJASON BOWLES AND AMERICAN MAJORITY NO. 81 TOYOTA TEAM RIDING A WAVE OF MOMENTUM HEADING INTO NEW HAMPSHIRE THIS SATURDAY