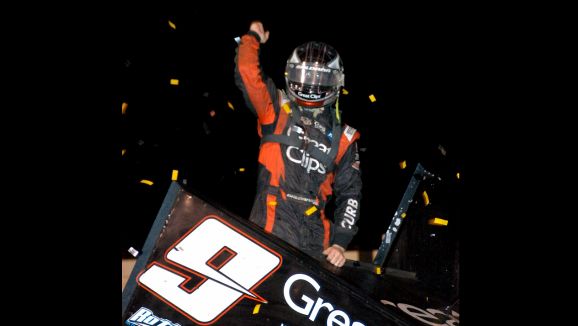 [/media-credit]Forty eight 410 sprint cars showed up to compete in the Knight before the Royal with the World of Outlaws at Eldora. From the very beginning it was obvious this wasn’t going to be a typical night of racing. The first oddity occurred when the internet connection for the sanctioning body went down about an hour before the event was to begin. It left them for the most part without communication and the ability to update fans not in attendance. The strangeness would continue on into the evening with Sammy Swindell losing his steering wheel in his hands while lining up for a restart. Cody Darrah’s belts coming loose during a caution. Jac Haudenschild losing his steering and turning hard left into Tony Stewart and eliminating both cars from the event. Friday the 13th effected the night in many ways and none of them superstitions.

The quick time of the evening was set by David Gravel with a lap of 13.343 seconds around the high banked oval. Three competitors, Brad Sweet, Dale Blaney, Justin Henderson, would turn the exact same lap time of 13.512 and their order would be determined by the speed of their first lap. The top ten qualifiers were only separated by .169 seconds and the entire field was only separated by 2.252 seconds and the slowest times posted came from competitors making their first trip to Eldora Speedway.

Heat number 2 would see Sammy Swindell dominate over Justin Henderson, Cody Darrah, Stevie Smith and Kerry Madsen. It would also offer the first foreshadowing of the evening with co owner of first in the points, Tony Stewart Racing’s Donny Schatz finishing outside the transfer spot in 6th. The 4 time series champion was relegated to the B Main but he wouldn’t be alone.

Danny Lasoski would literally walk the dog on the field in his new Zemco racing 1Z ride beating Brian Brown, Kraig Kinser, Steve Kinser, Bill Rose. But it would send 2 more big names to the B Main in Tony Stewart and Daryn Pittman.

The final heat race was a hard charging and heavily contested race between Joey Saldana and Craig Dollansky with Saldana finishing on top, also transferring would be Jim Nier, Jason Sides, and Brad Sweet. But 3 more big names were sent to the B Main, Lucas Wolfe, Jac Haudenschild, and Chad Kemenah.

The C Main was clearly a race of desperation transferring only 2 to the Last Chance Showdown of the B Main. The original lineup called for the C to be a 12 car show but when Cap Henry and Rick Fraley were forced to scratch for the evening, the 10 car field that took the green was clearly geared up and ready to do whatever they needed to do to make the big show. Brian Paulus and Dustin Daggett would easily transfer to the Last Chance Showdown.

The B Main was as tough a field as you will ever see on a dirt track in any series anywhere in the country. When Randy Hannagan and Tony Stewart lead them to the green they didn’t even make a lap before there was a three car tangle between Logan Schuchart, Chad Blonde, and Sam Hafertepe Jr. The heavy damage to Hafertepe’s car would relegate him to a back up for the Kings Royal if he has one to pull. Blonde was questionable as to whether he had frame damage as well and he stated, “We don’t have a back up so if we can’t fix it we are headed home.” 5 laps in Randy Hannagan dropped a rod through the bottom of the motor and went up in a cloud of blue smoke his evening officially over. The engine damage he reported after winning the 360 feature later in the evening would run him right about $15,000. From that point on it was Seek and Slide around the high banks of Eldora and when the dust settled it would be the Steel City Outlaw, Tim Shaffer leading the Rushville Rocket, Tony Stewart to the line. Also transferring to the A Main was The Wild Child, Jac Haudenschild and The Rough Rider, Tyler Walker. Needing a provisional to get into the A Main if they were to run it were, Donny Schatz, Lucas Wolfe, Daryn Pittman, and Chad Kemenah.

When the A Main took the track the only provisional in the field belonged to Donny Schatz who would be slated in the 25th spot but would actually start the race in the 24th spot when Tony Stewart choose to start at the rear of the field. Joey Saldana jumped out to an early lead at the green and was pulling away from the field when Tim Kaeding spun on lap 9 to bring out the caution. After a quickie yellow the race resumed but only briefly because on Lap 11 a 5 car pile up with Tyler Walker, Kerry Madsen, Jim Nier, Brad Sweet and Bill Rose would bring out the red flag. The only car able to return to the race was Bill Rose. The other 4 were damaged beyond repair in the 2 minute allotted work time. Madsen will need to go to a back up car as will Brad Sweet for the Kings Royal on Saturday night. As the red was lifted and the yellow came out. Sammy Swindell spun on the front stretch. Upon investigation by the series officials his steering wheel had come off in his hands as he attempted to line up. The strange incident relegated Sammy to the back of the pack. At the same time Kraig Kinser entered the work area with a flat Right Rear tire and Cody Darrah stopped in front of a track official to get assistance because his safety belts had come loose in the car. When the green finally flew again it wouldn’t fly for long. Jac Haudenschild would break something in the steering of his car and turn left right into the path of an at speed Tony Stewart causing a very hard impact and ending both of their nights at lap 13. The race would go green again and remain green this time until the final lap. Joey Saldana would lead all the way with serious challenges from Greg Wilson who started the night in 20th and ended up 2nd. On lap 30 the yellow would come out after the first 4 cars had taken the checkered flag when Jason Sides blew a Left rear tire and Kraig Kinser would blow a Left Rear tire and turn the car sideways at the line. The rest of the top 5 would be Dale Blaney, Craig Dollansky, and Brian Brown in his first time at Eldora in a 410 Sprint car. The KSE Hard Charger would go to Greg Wilson. And Steve Kinser would take over the point lead going into the Kings Royal.

Through all it’s bizarre twists and turns and it’s even stranger occurrences. Eldora lived up to her reputation of being hard core and unforgiving. She has her favorite sons. And winning there once doesn’t make you one of them as Chad Kemenah found out. But she is loyal to a fault. Loyal to her fans. She treated the near sell out crowd to one of the best nights of Outlaw racing in the season thus far. She was fast. She was challenging and she was demanding. But when Joey Saldana’s small sons stepped up to the podium to share in their dad’s excitement you could feel her smile. For all of his struggles this year and all of the struggles he has had at Eldora in the past tonight she gifted him with a memory that won’t soon fade. Joey Saldana went home the champion of the Knight before the Royal. And he went home a hero in the only eyes that truly matter, the eyes that never see him as anything else, his sons.