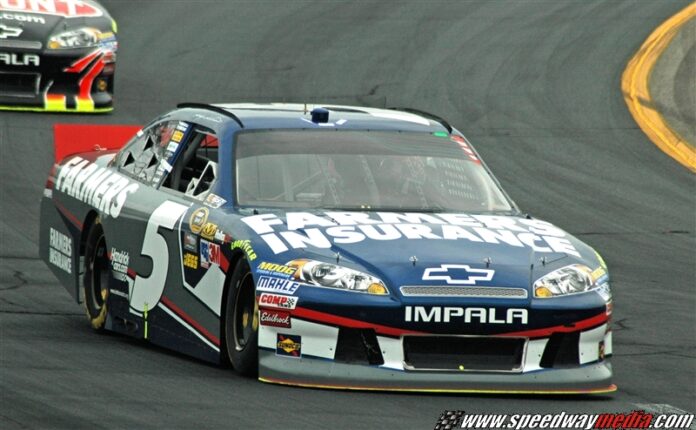 [/media-credit]While not surprising that conversation still swirled around A.J. Allmendinger and his failed drug test, here is what else was surprising and not surprising from the 20th running of the Lenox Industrial Tools 301 at New Hampshire Motor Speedway.

Surprising:  Race winning crew chiefs do not usually look at getting a manicure as part of their post-race celebratory plans. But Kenny Francis, crew chief for the winning No. 5 Farmer’s Insurance Chevrolet driven by Kasey Kahne, may have to do just that.

“I bit off all my fingernails,” Francis said, after watching the battle between his driver and a hard-charging Denny Hamlin. “At least I have two weeks for them to grow back.”

“Yeah, from the pit box, we had a pretty good car all day,” Francis continued. “Fortunately we were able to finish it off and outrun him to the finish.”

This was the No. 5 team’s second victory for car owner Linda Hendrick and the first ever trip to Victory Lane for driver Kasey Kahne at New Hampshire Motor Speedway.

“We made our bed by taking those four tires,” Denny Hamlin, driver of the No. 11 FedEx Freight Toyota, said. “Darian (Grubb, crew chief) wanted to take two (tires) – I told him I just needed tires and that was it.”

“He took it that I needed four tires,” Hamlin continued. “It was just a little miscommunication that turned into a second-place finish.”

Hamlin, who started from the third spot, was the highest finishing Toyota driver and led five times for a race-high 150 laps of the 301 mile race.

Surprising:  It was a matter of surprising seconds that both helped and hurt one race team at New Hampshire this weekend. Kyle Busch, driver of the No. 18 Interstate Batteries Toyota, scored the pole position for the race by just 0.003 seconds.

Timing, however, came back to bite him when he sped by seconds on pit road and never really recovered. Busch, after leading 65 laps, finished the race in the 16th position.

“It was a tough day for the Interstate Batteries Toyota,” Dave Rogers, crew chief, said. “We got caught speeding the first run there – that wasn’t Kyle’s fault.”

“We calculate the RPM we’re supposed to run,” Rogers continued. “Gave Kyle the wrong number and he sped and that got us behind from the beginning.”

“Then we were trying to play catch-up all day long.”

Not Surprising:  When it comes to flat, shorter tracks, it is not surprising that talk turns to tire wear. And some drivers, particularly four-time champion Jeff Gordon, had some thoughts to share on this issue after the race.

“Yeah, I’m really disappointed in today,” Gordon, who finished sixth in the No. 24 Dupont Chevrolet, said. “This tire, I tell you, Goodyear has got to go back to the drawing board.”

“They came here with a new tire and it is not a very good tire,” Gordon continued. “I think they know it and I’m hoping that they can come up with something a little bit better than this.”

Surprising:  At a track where he once was dominant, and in fact led every lap for one race, it was surprising to see Jeff Burton run so poorly. The driver of the No. 31 Caterpillar Chevrolet had problems on pit road, went down a lap and finished 21st.

“We had a pit road incident early in the race that really set us back,” Burton said. “We had a top-12 car throughout the day, but couldn’t get a caution when we needed it.”

“The speed was there but those long green-flag runs hurt us trying to get that lap back.”

Not Surprising:  Dale Earnhardt, Jr., who should definitely be known as ‘Mr. Consistent’, kept up his stretch of consecutive laps finished and pulled off another good run at New Hampshire.

The driver of the No. 88 National Guard/Diet Mountain Dew Chevrolet finished fourth in the race and is now just 16 points behind Chase standing leader Matt Kenseth.

Surprising:  One driver who desperately needed a good run to stay in championship contention had a surprisingly difficult day.  Carl Edwards, driver of the No. 99 Fastenal Ford Fusion, finished 18th and remained stuck in the 11 position in points, with no wins to his credit.

Edwards finished so poorly that another surprise occurred after the race. Crew chief Bob Osborne was replaced by Chad Norris, who has been with Roush Fenway Racing since 2005 and has led the team’s research and development efforts since 2011.

“Our commitment to winning a championship with the No. 99 in 2012 has not waivered,” Jack Roush, team owner said. “I’m committed to providing the resources to Carl and to his team to do that.”

“This restructuring of Bob’s role and the introduction of Chad Norris as the crew chief for the No. 99 will put us in the best possible position for these final seven races before the Chase begins.”

Not Surprising:   No one could blame new father Kevin Harvick for not only focusing on the race but also having baby Keelan on his mind. The driver of the No. 29 Rheem Chevrolet finished eighth after battling handling issues throughout the race.

“I’m really proud of the entire Rheem crew and the effort they put in today, but we couldn’t figure out the right set up to get out front,” Harvick said. “We finished about where we should have.”

“I’m looking forward to the off weekend,” Harvick continued. “It couldn’t have come at a better time and it will be great to spend time at home with my wife and newborn son.”

Surprising:    It is not often when you hear a driver admit to struggling mightily with a particular issue on his race car. But Greg Biffle, driver of the No. 16 3M/Post-It Ford Fusion did just that, in spite of finishing ninth and being the highest Ford finisher of the New Hampshire race.

“I’m a terrible driver when it comes to taking care of the brakes,” Biff said. “It’s got to be me because we’ve done everything under the sun, but about halfway through I lost my brakes and that’s about all I could do.”

“Off the green, it would come back and haul like crazy, but then I just had to keep giving it up,” Biffle continued. “It was just a case of brakes.”

Not Surprising:  Michael Waltrip Racing continues to be synonymous with good runs, with all three of the team cars in the top-15 in the running order.

Clint Bowyer, driving the No. 15 5-hour Energy Toyota, was up on the wheel and finished third, while Martin Truex Jr. finished 11th and Brian Vickers finished 15th.

“All in all, it was a good weekend for our 5-hour Energy Toyota,” Bowyer said. “It was a good way to get things turned around.”

“After the last two weeks of getting wrecked, it felt good to get a good finish.”

Surprising:  Although it was hot at the track where the driver of the No. 14 Mobil 1/Office Depot Chevrolet has won before, Tony Stewart surprisingly struggled, finishing 12th in contrast to his second place finish last year.

“We just had no grip out there,” Stewart said. “Steve (Addington, crew chief) made one last change there at the end, and it definitely helped.”

“We were finally able to make up some ground.”

“To tell you the truth, today was rough,” Montoya said. “We struggled all weekend.”

“Today was a tough day for our Bass Pro Shops team,” McMurray reiterated. “We battled some handling issues early on in the race but we never gave up and brought home a lead lap finish.”

The Sprint Cup Series has its last off weekend next week before the dash to the end of the season. The next race on the schedule will be on July 29th at the Brickyard.