Sage Karam: Driving to the Future 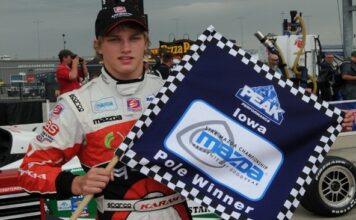 [/media-credit]If you don’t know him yet, Sage Karam is the young phenomenal driver competing in the Star Mazda Championship for Andretti Autosport.  The Nazareth, Pennsylvania native has amassed numerous accomplishments throughout his young career and has his sights set on a successful future in the world of open-wheel racing.  Karam won nine races throughout the 2010 USF2000 Championship and graduated to the Star Mazda Series in 2011.  In his rookie season in Star Mazda, Karam won two races and earned the Rookie of the Year award.

The youngest winner in USF2000 and the Star Mazda Championship has six top-five finishes in his sophomore season thus far and will be competing August 4th and 5th at one of his favorite venues on the schedule, Trois-Rivieres.  With this list of credentials, the world needs to know one of open-wheels future stars.  The Andretti Autosport driver took a few moments to interview with me and provided some great insight on who he is and what makes him a great race car driver.

What attracted you to racing?

“The Andretti’s are my neighbors and my parents were fans of Michael. I guess I was always exposed to IndyCar racing since I was very young.”

“That’s a tough question because the series is so diverse. I love the atmosphere of competing at Lucas Oil Raceway during the Indy 500 weekend – that’s huge! From a driver’s standpoint, Toronto brings out the best in you. But the fans at Trois-Rivieres know their racing and pack the stands. I guess it’s difficult to narrow it down to just one! Sorry.”

You were rookie of the year in Star Mazda in 2011, what’s the next big feat you would like to accomplish?

“Well, I am not closing the book on the 2012 Star Mazda Championship yet. We are really hot right now and I am more confident than ever in the car. The Star Mazda series really took my driving to the next level. I know I am prepared for Indy Lights, but if I am forced to stay another year in Star Mazda, I am prepared to do that too.”

Driving for Michael Andretti puts you in an environment with many successful people, how are you able to utilize this to your advantage?

“The expectations at AA are extremely high for every driver and employee on the team. Michael has me in that seat for a reason, if he didn’t believe in me, I wouldn’t be there. With that in mind, I never want to let him down. Everybody kept asking why I was so upset with getting two 2nd places at Edmonton over the weekend, and my response to that is my expectations are higher and my team deserves better. The resources on our team, for a young driver are plentiful. For example, I watched in-cars of RHR and Hinch when we rolled into Edmonton last weekend. Hinch then also took the time to review my in-car at the end of the day on Friday. The chemistry on the team is awesome and everybody works together. Marco always finds time to stop by on race weekends to check on me too. If I do well, he is one of the first people to send me a text or Tweet. It’s a pretty big deal when the Lights team engineers and mechanics stop by to watch your qualifying or race. Michael is at almost every session to observe. I always want to impress him and it probably takes my driving to the level too.”

What is your most cherished memory of your career to date?

“Fortunately, I have a lot of great memories. Some of them include being the first driver to get Michael his first win as owner of the rebranded Andretti Autosport (USF2000 St. Pete 2010). Winning the USF2000 title in the manner we did was awesome too. We set a lot of tracks records in USF2000 and Star Mazda which is always cool. Being the youngest winner of the Skip Barber shootout, and youngest winner in both the USF2000 and Star Mazda series is a milestone too. But probably the thing I take the biggest pride in is back in 2011 when we took a new driver in me, a new car (Star Mazda) for the Andretti Autosport team, and developed the car and driver to a respectable level without a teammate. I was the youngest driver in the series, turning 16 just two weeks before the first race.”

Who is your all time favorite driver and what do you admire about him?

“I grew up watching Michael Andretti and always enjoyed the confidence he demonstrated on the track.  I love watching vids of Senna’s races and admire his passion to be the best. Both of these drivers commanded attention.”

A great sportsman never gives up, after starting in the back of the field in the 2nd Toronto race you drove like a man possessed to finish 3rd. Where does your motivation and drive for success come from?

“I guess I am just hardwired for this. We (my sister) were always taught growing up that nothing matters after first place. But we also were taught the value of sacrifice and hard work. I was angry in Toronto we didn’t have another lap so I could win the race. I woke up that Sunday morning (Toronto race #2), and I was looking to my dad for advice. He gives me advice whether I want it or not (haha). I asked him where he thought I’d finish the race since I was starting in last? He knows I am a student of the sport, and he said, “What would Senna do if he were in your shoes?” I knew immediately what my assignment was. Racing means everything to me. It is an everyday thing for me, not just something I do on the weekends or part time. Some drivers want to be a champion today, some tomorrow, for me, it’s an everyday thing. It’s all that I think about. My family has made great sacrifices to get me to this point. My manager and sponsor, Michael Fux, has put a lot of faith in my talent.  So, to go out and race without passion and a true desire to win, is senseless to me.”

What is a typical week like for you during the season?

“Every morning, without exception, I meet my dad at the gym and we strength train hard. Then he takes me through a cardio workout of swimming or some type of running. He is my trainer and our relationship actually works out really well. He was Michael Andretti’s trainer when Michael competed. He has trained other drivers and probably the best guy to get you in serious shape. I workout very hard, because I never want to get in the car knowing any other driver outworked me. The very least you can do as a driver, even if you are not that talented, is to show up on race weekends in top shape. After training, I hang with my friends and we usually go fishing four or five days a week. I tried to get a part time job this summer, but nobody would hire me because of my racing schedule. I will be going into 11th grade this fall so my schedule will revolve around academics, tutors, wrestling practice and trying to fit time in for my friends. I usually wash my car once or twice a week and I enjoy keeping it looking sharp. I go on iRacing a couple of times a week to train at upcoming tracks too. I always have to complete a pre-race and post-race report for my engineer from my home computer.”