Surprising and Not Surprising: Brickyard 400 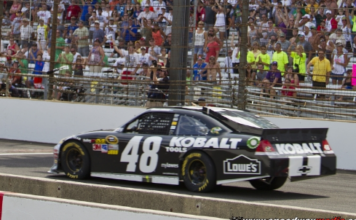 [/media-credit]At one of the most storied tracks on not just the NASCAR schedule but the motor sports circuit overall, here is what was surprising and not surprising from the 19th Annual Crown Royal Presents the Curtiss Shaver 400 at the Brickyard.

Surprising:  It was surprising that the emerging points leader after the race at the Indianapolis Motor Speedway enhanced his proud team owner’s sleep habits.

Hendrick Motor Sports principal Rick Hendrick had just one thing to say about his driver, Dale Earnhardt, Jr., who assumed the coveted lead by 14 points after a fourth place finish at the Brickyard.

“I will be able to sleep better tonight,” Mr. H. said simply after the race. His HMS driver has not led the point standings since September of 2004 after the race at New Hampshire.

Junior echoed his team owner’s sentiments of pride, while reiterating that he not only wants, but needs more wins to keep that top spot.

“I’m proud of that because it says a lot about our body of work,” Dale Earnhardt Jr. said. “I have felt that way about our position in points all season long.”

“But we need to win more races,” Junior continued. “If we want to win the championship, we have to.”

“We’d like to step it up just a little bit more.”

Not Surprising:  While making history with his fourth Brickyard win and tying teammate Jeff Gordon and idols Al Unser, A.J. Foyt and Rick Mears for four victories, it was not surprising to see this driver’s  little girl Genevieve steal the show during the post-race ceremonies.

Jimmie Johnson, driver of the No. 48 Lowe’s/Kobalt Tools Chevrolet, simply could not convince his daughter to kiss those hot, gritty bricks in spite of his intense coaxing.

“I don’t really think she knew what was going on,” Johnson said. “The asphalt was pretty hot, so she got her hands down on it and I think that scared her.”

“She’s a very cautious girl and that is going against everything we’re trying to teach her,” Johnson continued. “She just wasn’t in to it.”

Surprising:  It was most surprising that the second place finisher was so ecstatic about his finish that he wanted to do his own ‘victory’ burnout after the race.

Kyle Busch, behind the wheel of the No. 18 M&M’s Toyota, posted his career best finish at the Brickyard and his best finish of the season since his third place finish at Charlotte in May.

“It feels so good to actually run well and finish well,” Busch said. “We’ve been needed to do this for so long.”

“It felt like a win to us,” Busch continued. “I wanted to do a burnout, but I’ll save that for when we really do collect the checkered flag.”

Not Surprising:  Greg Biffle, driver of the No. 16 3M Ford, proved one NASCAR adage true, that loose is fast. Biff came in third, his sixth top-10 finish in ten races at Indy.

“We were pretty loose all day long,” Biffle said. “It was unfortunate we were that free and we couldn’t fix it.”

“We were too loose to get it done so we came in third.”

Surprising:  With a great qualifying run, an outside pole starting position and a brand new crew chief in Chad Norris on the box, it looked like nothing could derail Carl Edwards from finally pulling out a decent finish and a good day in the points race for the Chase.

But a surprising mechanical problem forced the driver of the No. 99 Fastenal Ford to go laps down early in the race and finish 29th.

“We didn’t know what was wrong with the engine and we were kind of points racing but also racing for the win,” Edwards said. “We stayed out there with seven cylinders or so and then got caught up on pit road again and went another lap down.”

“That was pretty much the death knell for the whole thing.”

Not Surprising:   As is so often the case, being at the back of the pack leads to trouble. And that’s just what Matt Kenseth experienced on lap 134 when Joey Logano lost control, slid into Trevor Bayne, Bobby Labonte and ultimately Kenseth.

“The farther that we went back, the dumber people drove,” Kenseth said after exiting his fiery No. 17 Fifth Third Bank Ford. “You could see it was just a matter of time before the wreck happened.”

Kenseth finished the race in the 35th position and, not surprisingly as a result, fell to second in the point standings.

Surprising:  Jeff Gordon surprisingly has not posted a top-3 finish in his last 23 races and he continued the longest stretch of his career in that mode with a fifth place finish at Indy.

“I’m pretty disappointed really,” the driver of the No. 24 Drive to End Hunger Chevrolet said. “It’s always nice to finish in the top five but at this point in the season, I feel like it was a little bit of a missed opportunity.”

Not Surprising:  So much uncertainty continued to reign for the No. 22 Shell/Pennzoil Dodge Penske race team, even at the Brickyard. Although Sam Hornish, Jr. was still behind the wheel, finishing 16th, the cloud of the A.J. Allmendinger indefinite suspension for the failed drug test continued to hang over the proceedings.

“There are so many questions,” Roger Penske, team owner said after the drivers’ meeting at Indy. “Our phone is ringing off the hook with people who are interested in the ride in the No. 22.”

Penske has since made the decision to release Allmendinger as their driver and have named Hornish Jr. the driver for the remainder of the 2012 season.

Surprising:  Only one driver could compare the historic Indianapolis Motor Speedway to a junk yard but Kevin Harvick, driver of the No. 29 Jimmy Johns Chevrolet, did just that, at least when it came to his 13th place car.

“We were junk all weekend,” Harvick said. “No matter if we were turning left or going straight.”

“That pretty much summed up today.”

Stewart, who qualified his No. 14 Mobil 1/Office Depot in the 28th position, rallied to finish tenth and teammate Newman, in the No. 39 Quicken Loans Chevrolet, finished seventh.

“We just were a little bit tight in the center of the corner and that’s kind of what we fought all day,” Smoke said. “So, I was proud of the gains we made.”

“I’m from the Midwest and so is Quicken Loans so it was nice to get a top-10 finish,” Newman said. “We just didn’t have quite the speed we needed.”

The Cup Series will next take on the ‘Tricky Triangle’ at Pocono Raceway.