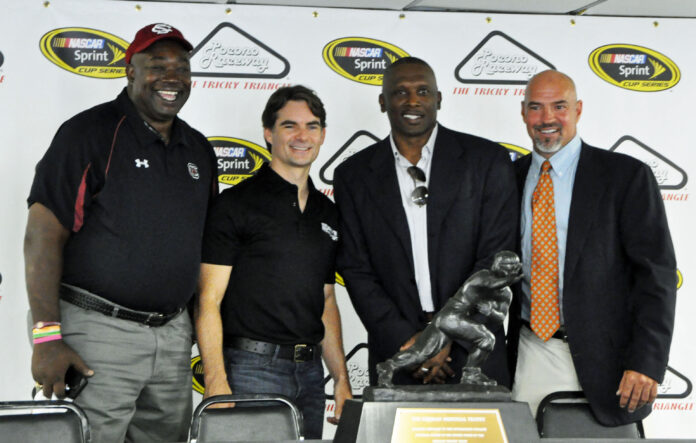 [/media-credit]Jeff Gordon, four-time champion driver on the NASCAR track, received one of the highest honors, the Heisman Humanitarian Honor, for his philanthropic works off the track.

The driver of the No. 24 Drive to End Hunger Chevrolet was accompanied by Heisman Trophy Trustee Jim Corcoran and Heisman Trophy winners George Rogers and Tim Brown for the announcement of the award at Pocono Raceway.

Gordon is the seventh recipient of this prestigious award and he will actually receive the award at the 78th Annual Heisman Memorial Trophy Dinner on Monday, December 10th at the New York Marriott Marquis.

“This year, the Heisman Memorial Trust is delighted to add one of the greatest drivers in NASCAR history as the seventh name on the list,” Jim Corcoran, Heisman Trophy Trustee said. “The Trust decision to honor Jeff was very easy.”

“Like the Heisman Trophy itself, Jeff Gordon has created a legacy of excellence both on the field of competition and for the greater good of society.”

Corcoran said that Gordon was honored specifically for his work with helping children with serious illnesses, through the Jeff Gordon Children’s Foundation and through his launch of a comprehensive cancer care center in Rwanda.

“This Humanitarian award is something I’m very proud of,” Jeff Gordon said. “This is truly an honor.”

Gordon was also pleased to be in the company of the other Heisman Trophy winners, although he did joke at the beginning of the press conference that he was the smallest person on the dais.

The four-time champ also acknowledged the interesting connection being made through the award between NASCAR and other sports.

“But the award is given to all walks of life and sport,” Gordon continued. “To be a part of this list is something that I never expected and something that I’m very honored by.”

Gordon joins other Heisman Humanitarian winners, including two Olympians, three NFL players, and an All-Star center from the NHL. Joey Check, an Olympian and philanthropist, was the inaugural winner in 2006, recognized for donation of his gold medal bonus to the Right to Play Organization to help children in need.

Other winners include George Martin, NY Giants defensive end, who helped those impacted by the 9/11 tragedy; Pat LaFontaine, an NHL great who founded an organization building interactive children’s playrooms; Mia Hamm, world-famous soccer player for her work with the Foundation that bears her name dedicated to helping those with aplastic anemia; William Dunn, Tampa Bay Buccaneers star who founded Homes for the Holidays; and Marty Lyons, another NFL great, who became a surrogate father to a critically ill child.

“This is a big day for me and I really look forward to December,” Gordon said. “You always want your efforts to be recognized and today this is a very, very proud moment.”

“It doesn’t get any better than being recognized by excellence, which is what the Heisman is all about.”

Gordon acknowledged that NASCAR as a sport has enabled him to be so involved philanthropically. In fact, given his sponsor, the AARP Foundation’s Drive to End Hunger, he is even more involved in charitable works on and off the track.

“I feel so privileged to be a part of this sport,” Gordon said. “I think of NASCAR and what it’s given to me.”

“It’s given me so many opportunities but it’s also given me a great platform and way to give back,” Gordon continued. “I see such a giving community and environment.”

“Everybody really wants to help and that’s what drove me to start my own foundation,” Gordon said. “And it continues to drive me in ways that I never expected.”

“My own sponsor, the first ever cause-driven sponsorship, just continues the work,” Gordon said. “This award just solidifies all the efforts that makes my work what it is and takes us to places we never thought we would go to help so many children and to find those treatments and cures.”

Gordon’s teammate and five-time champion Jimmie Johnson expressed his pride in Gordon’s accomplishments as well during his media appearance at Pocono.

“I am happy to hear that and think he is extremely deserving,” Johnson said. “Fundraising and charitable work is only as good as the name behind it and the name that’s behind it; and that’s Jeff.”

Basking in the glow of his teammate’s praise as well as his new award, Gordon turned a bit more philosophical. He admitted that what drives him now is the success and the wins that he is seeing off the track through his charitable work world-wide.

“Today we’re seeing a lot more success and what we can call winning because the cure rates have gone high,” Gordon said. “But at the same time, long term effects are still in place and you still see kids suffering and dying.”

“Then you go abroad and see what’s happening there,” Gordon continued. “I know what a difference we can make there because kids are dying of things that are curable.”

“Life is a journey and racing has been a big part of my journey,” Gordon said. “I’ve been able to experience winning more than I ever thought.”

“I was thinking how hard we have worked to try to win and put so much effort into it,” Gordon continued. “Yet ten or fifteen years, what it is all going to mean?”

“Those trophies are nice but they tarnish,” Gordon said. “But when you save a child’s life and you have something as meaningful as this, those are things that stick with you for a lifetime.”