The New Keselowski – Can He Win It All? 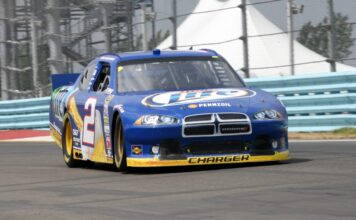 [/media-credit]Fans used to be split on Brad Keselowski. Some loved him, especially when he drove for Dale Earnhardt Jr.’s Nationwide team. The kid who hit everyone but the pace car in the NASCAR Nationwide Series, riled the feathers of drivers and even got Carl Edwards airborne at Talladega (and had a few run-ins with Cousin Carl thereafter) has grown up, put on his best face and become a fan favorite. How does such a tremendous turnaround happen? Talent and a little PR work.

Just look at how he handled finishing second at The Glen. Nothing but class. While far more mature and championship drivers wanted to whine about adverse conditions on the track in the final lap. Keselowski faced the camera, looked straight into it and declared the finish as close to heaven as possible. Just like his former rival, Edwards, he was honest and proved that he was a racer, not a Chaser. It was refreshing.

I credit Keselowski’s rise with his move to Penske a couple of years ago. The No. 2 Dodge driver had a reputation of doing controversial things.  From the lack of restraint at Talladega, to having his father, former Sprint Cup driver Bob Keselowski, appear on national television accusing Edwards of trying to kill his son (which of course the younger Keselowski had no control over). All of a sudden Brad was correct and professional in everything he did. The Captain had spoken. We saw this attitude over the last two years. Kurt Busch acts up? Gone. A.J. Allmendinger fails a drug test? Gone. Brad has been smart enough to pick his battles and a star is in the making, if you ask me.

No one knows how the switch to Ford in 2013 will go, but I’m betting on Brad Keselowski. He may win the Sprint Cup Championship this year, but as long as the Penske organization can get the cars as good as they have been this year, you can expect Brad to be in the hunt. Penske engines have been good, but the addition of Yates power might make them even better. Rest assured The Captain (Roger Penske) won’t let things get too far behind.

Can the great change in the Keselowski attitude lead to a championship in 2012? It would be great to see Dodge go out as a winner. It would be great to see The Captain win his first championship, but Keselowski has a few hurdles to jump. There’s the elephant in the room, Jimmie Johnson. He will probably have the lead coming down to the final ten races. There is Matt Kenseth, who seems to be on a mission, and his teammate Greg Biffle, who is very hungry. Of course there is Junior Earnhardt, who without a couple of equipment failures, would be right up there. My money’s on Keselowski, which is foolish. My heart says Kenseth or Keselowski, but my mind says Johnson. It should be interesting.

Ron Fleshmanhttp://www.ris-news.com
Ron Fleshman has followed NASCAR racing since attending his first race at Martinsville Speedway in 1964. He joined the Motor Sports Forum on the CompuServe network in the 1980s and became a reporter for Racing Information Systems in 1994. In 2002, he was named NASCAR Editor for RIS when it appeared on the World Wide Web as www.motorsportsforum.com. He can now be found at www.ris-news.com. Ron is a member of the American Auto Racing Writers and Broadcasters Association. You can find Ron following and reporting on the top three NASCAR divisions each week. As a lifer in his support of racing, he attends and reports on nearly 30 events a year and as a member of the motor sports media, his passion has been racing for 47 years. He lives with his family in rural West Virginia and works in the insurance industry when not on the road to another track.
Previous article
IRWIN TOOLS NIGHT RACE GUESTS RECEIVE FLAG, $10 OFF COUPON FROM OUTBACK
Next article
Surprising and Not Surprising: Finger Lakes 355 at The Glen